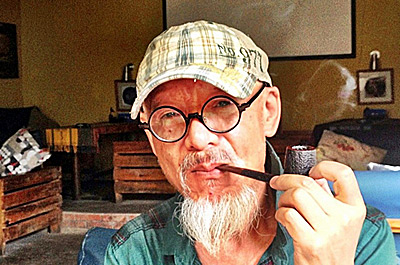 Running a small and quiet bar next to a lake in the northernmost part of the city is an averaged sized vegetarian man in his sixties. Old Gan (as his friend’s call him) is the earliest pipe smoker I’ve met in Southwest China, having partaken of the hobby for close to twenty years. When asked if he really is the oldest pipe smoker in town he makes sure to spend a good bit of time telling me of the people in villages who have been smoking home-grown and hand-cured tobacco from pipes for hundreds of years in China. But that said, he believes himself to be one of the area’s earliest smokers of a Western-style pipe and imported tobacco. Before pipes he was a cigarette smoker but then made the switch when he heard pipe tobaccos lacked the chemical additives so common in cigarettes.

A little while back I stumbled upon the bar when I noticed the sign on the door said "Tobacco" in English with a transliterated version of the same in Chinese and showed a picture of a Mayan pipe smoker. The lone man sitting at a table in the dark red-brick room had on a baseball hat, tennis shoes, and a t-shirt. He had a nicely groomed beard and was smoking a silver-banded Peterson pipe. The bar was filled with little-known single malt whiskeys and even the beer cooler had an excellent selection of very non-Chinese beers. The whole get-up was so out of place that I approached him speaking English, assuming this must be a foreigner running the bar. "Excuse me sir are you the owner? This is a fancy place. Hello?" Once I was about three feet away he finally spoke up in Chinese, "I’m sorry, I hear you, but I have no idea what you’re saying." 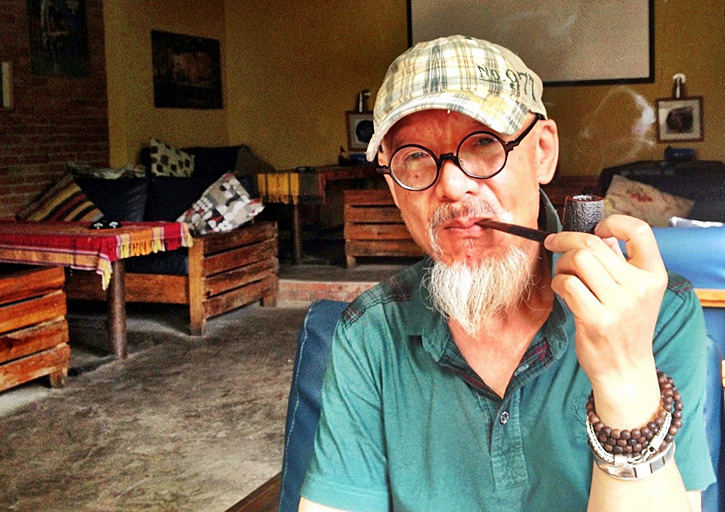 Upon realizing our common language was not English, and was actually more related to briar and the fragrant weed, we quickly became friends. He showed me pictures of his travels around the country in his Jeep Wrangler visiting famous sites as well as remote monasteries.

Today I’m visiting again and we’re arguing over tobacco blends while he shows me his nearly $800 Kai Nielson sandblasted billiard. He owns more than ten pipes but only keeps five in his regular rotation. While with me, he smokes three straight bowls in this Kai Nielson without waiting for it to cool, so he either knows little about pipe maintenance or he’s a serious fan of the pipe. But it doesn’t take me long to suspect it’s not from lack of knowledge as the man clearly knows his stuff.

A little while later I’m pressing him on his favorite tobacco. On the table he has Nightcap and London Mixture, and while he has mentioned repeatedly he’s a fan of Latakia, I’m having a hard time understanding the word for the blend he’s trying to communicate. He keeps repeating the word, then writing down the character and I’m stuck with my dictionary definition of "Old Palm." He pulls out a Chinese copy of Searching for Pipe Dreams and then The Pipe Bible and looks for the brand but can’t find it. Finally I google the Chinese, and then laugh for not guessing. As a die hard Latakia fan I should have easily guessed Penzance takes the crown for his palate. Though admittedly I figured he wouldn’t have access to something so hard to get from here. He tells me he was able to get around 30 grams (or about 1oz) for close to $50, "Well worth it," he smiles. 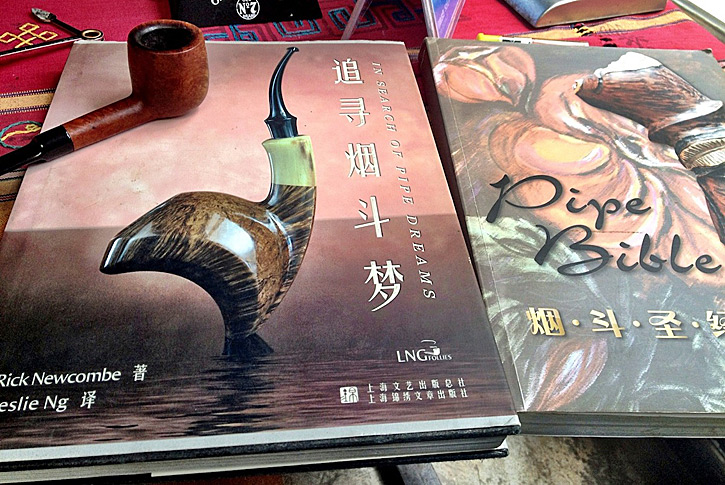 Old Gan tells me he doesn’t think pipes are specific to the wealthy but rather are specific to the cultured, and artsy people in China. Although he admits the poor would likely not have to time to be cultured or consider much in the art world. The pipe, he says, belongs to that unique class of people with the time and need for deep thought. This is particularly pointed as when he finishes talking with me he’ll frequently sit with me in complete silence for thirty minutes at a time.

Right now however, I’m not interested in silence but in the responses he gets from locals to smoking a pipe. As a strange looking foreigner I never know if I’m gettting looks for my pipe, my unusual clothes, my red beard, or something else. Old Gan tells me everyone knows what a pipe is and therefore no one wonders too much about it until they smell the room note of whatever he’s smoking. That’s when they notice something is different. They want to know what he’s smoking, what the pipe is made out of, how it’s made etc… And this is how he has introduced many friends to the hobby, at times selling both pipes and tobacco in his bar.

Then this reminds me of one thing I’ve always wondered about, the Chinese word for smoking without inhaling. Directly translated it means something like "to draw on fake smoke." This only makes him laugh, it is sort of fake smoking isn’t it? But then, he argues, you get all the flavor in your mouth so why inhale?

There have been several things that have led me to suspect Old Gan is the man I should be talking to about pipes in the city. He claims to have taught more than three hundred men (and women, including his daughter) to smoke a pipe. He also ran a local pipe club chapter for three years in his bar. But today he removes any doubt I may have had about his authority on the subject when I ask about Chinese-made tobacco. It turns out a local tobacco cutting factory, generally exclusively producing cigarettes, decided they wanted to try their hand at pipe tobacco. The company reverse-engineered a foreign pipe tobacco and put together a product to try out. Then figured Old Gan was the very man to test it. They came to him knowing he was a regular smoker of imported tobaccos and could give an honest and trustworthy opinion. Unfortunately for the company, and perhaps fortunately for the market in China, his opinion was so negative and his reaction so strong the company scrapped the idea altogether. At first I’m a bit taken aback; as mellow of a man as he is, it’s difficult for me to imagine him worked up in a way that would discourage a large company from moving forward with such a product. But even as he tells me the story I see the fire, or perhaps I should say fury, in his eyes over what he perceives as the butchering of something he very much loves. 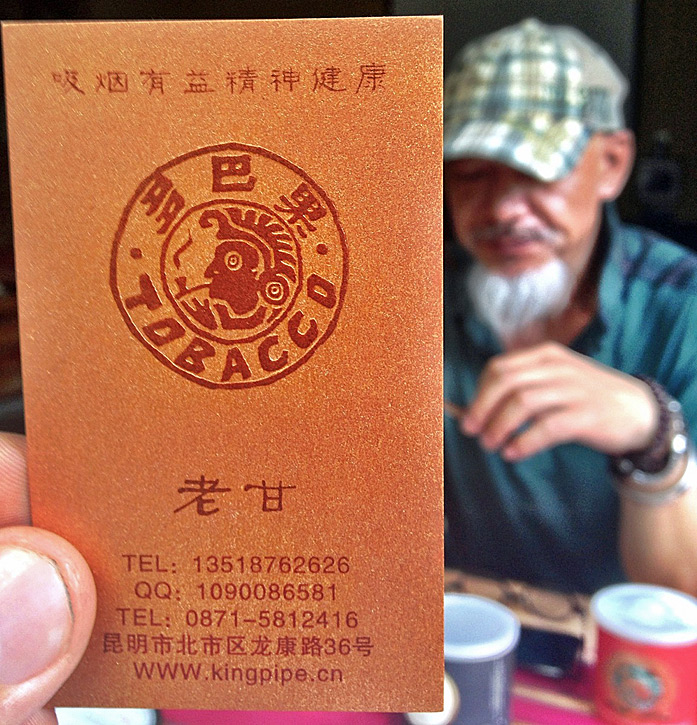 While it somewhat excites me that the local companies are even attempting real pipe tobacco, Old Gan tells me he personally has no hope of there ever being a quality pipe tobacco from China. "You can’t even talk about the history of the West without mentioning tobacco," he says, arguing the West produces good tobacco because of it’s long history. And he fears the desire to cut corners is too strong in China for there to ever be hope for a quality local product.

Next he pulls out a tin of McClelland Blackwoods Flake he wants to share with me. I’ve never actually smoked a McClelland blend as I’ve always been afraid I might dislike the so called ‘Ketchup Smell.’ But this affords me a good opportunity for a free sample. I tell him many Westerners liken the tin aroma to ketchup, and he laughs hysterically, bringing it up at least twice more during my time there. When I press him on how he’d describe it he merely says he always thought it strange, but never found something so suitable as the analogy to tomato sauce. Nevertheless he loves this particular blend and I’m quite impressed myself with the depth and mild nature of this flake. The ‘Ketchup smell’ may be prevalent, but it hasn’t stopped McClelland from being enjoyed in China.

The final topic of our discussion is drink pairings. Many of the Chinese I have known like to share their opinion about what is good to be imbibed, when, and with what. As an all day smoker, Old Gan drinks red tea throughout the day and switches to whiskey at night. He insists green tea cannot be enjoyed with a pipe (apparently a mistake I’ve made regularly). He also says that while whiskey is suitable, beer should never be paired with a pipe. These choices are understandable given red tea and whiskey’s natural smokiness, and his love of Latakia. But I can’t decide if I enjoy both green tea and beer with my pipe because I’m more of a Virginia smoker, or simply because I’m not wealthy enough to be exclusive in my enjoyment of the finer things in life. 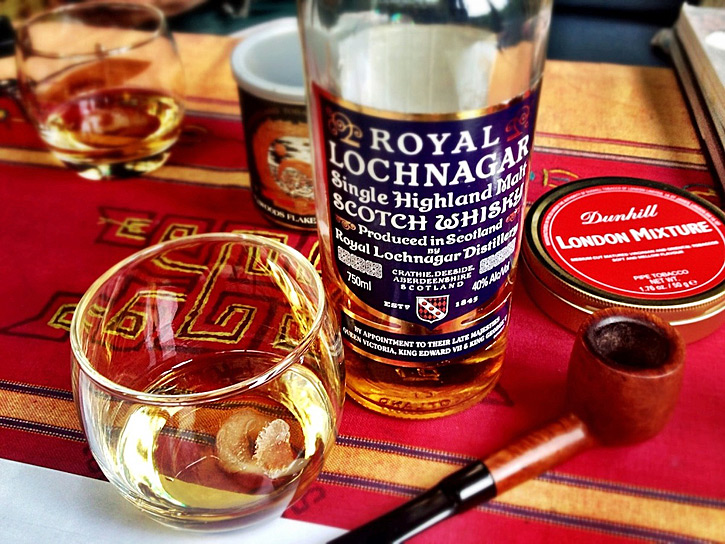 We both pack our pipes and finish our tea, then he insists on some whiskey, and who am I to say no? In China we don’t need an excuse like it being five o’clock somewhere, just good company, and a good pipe.

A Night with the Chongqing Pipe Club