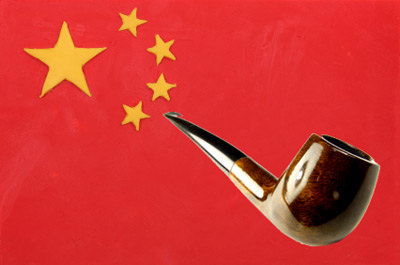 In a downtown market in the capital city of the southwestern-most province in China, Mr. Zhang shows me his extremely limited imported pipe tobacco selection. He jokes with me about a shop he ran a few years ago where he sold exclusively fake tobacco. He giggles a bit, it’s a short halting giggle suitable for a 75 year old man like himself, and says, "You just make more money when it’s fake."

Welcome to the world of tobacco in the earth’s most populous nation. A land where cigarettes sell for as little as a dollar a pack, or as much as several hundred dollars. A land with Great Wall brand cigars which taste more like a wall than anything great. And, much to my good pleasure, a land beginning to fall in love with the pipe. 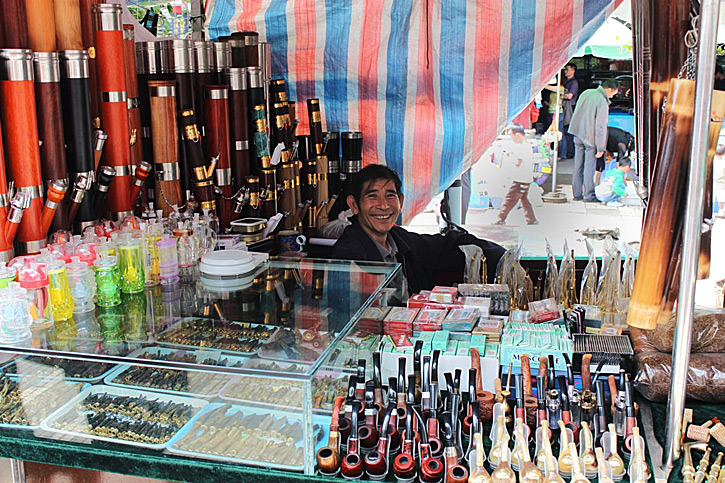 Mr. Zhang, from his tiny stand, sells everything from Burmese cigarettes and Camel Lights to water pipes and Captain Black Red. Currently he also has three types of MacBaren tobacco including the only-available-in-Asia Royal Box. He assures me his tobacco is real now, which I also know from first hand experience. But then he hands me a corn cob pipe and again begins to giggle. The difference between this cheap Chinese version of a Missouri Meerschaum and the real thing is truly remarkable. The bit feels brittle enough to break off in your teeth, but it always outlasts the bowl which usually burns through by the fifth smoke. As he points at the cob he leans in a bit and tells me with pride of a foreigner who came by and was "foolish enough" to pay too much for this thing. Usually sold for $2 he asked the westerner for $12, and when the unassuming response came back with $5, Mr. Zhang slapped it in his hand and gleefully took the deal. Apparently this story amused him enough that he’s been hanging on to it to tell to me later.

The culture of smoking has sunk deep in the Middle Kingdom. Once I watched two electric bikes collide and both drivers stand, with visible flesh wounds, begin to scream at one another to establish fault. Then after two or three minutes of screaming they simply stopped, one grabbed a box of cigarettes and handed them out to the crowd that had gathered. He then handed one to his new "adversary", helped him light the cigarette, took a few puffs himself, and then began screaming again. This cigarette meant, "I mean you no harm, this is just the process we must go through." I long to someday see something similar with pipes, but that journey has just begun.

Tobacco here is still primarily limited to cigarettes. However in the last few years a small contingent of people have taken notice of the western concept of a pipe. They see owning a pipe as a means of showing off wealth, and knowing how to smoke one as a demonstration of unusual skill.

There are still some big issues however, like the fact that almost all pipe tobacco sold online in China is sold illegally. The government closely monitors tobacco sales for taxes, but people have found a way around it on popular e-commerce sites by
listing empty tobacco tins in their pictures online and then shipping with the full product. That said, there is a surprising variety of tins available online, and even a few dealers who have tobaccos available by the pound.

But a bigger problem is the fact that almost no one knows what they’re doing when they first light up a pipe and they have no one to turn to for help. Smoking my pipe among a group of local friends; one, we call The Fish, told me he had purchased a very expensive pipe but smoked it once, hated it, and never used it again. With a little digging I find he was smoking a dried out Borkum Riff Whiskey, didn’t know how to pack the pipe, and attempted to re-light with every puff. Of course his experience was terrible. I hand him my pipe to try a puff of Samuel Gawith’s Full Virginia Flake. He then takes a puff, inhaling as deeply as many cigarette smokers do, and coughs profusely telling me, "This is much too strong for me." I try to reassure him you don’t have to breathe in. But at this point all five cigarette smokers in the room gather to tell me there is no point to smoking if you don’t inhale, and I fail to convince them otherwise. 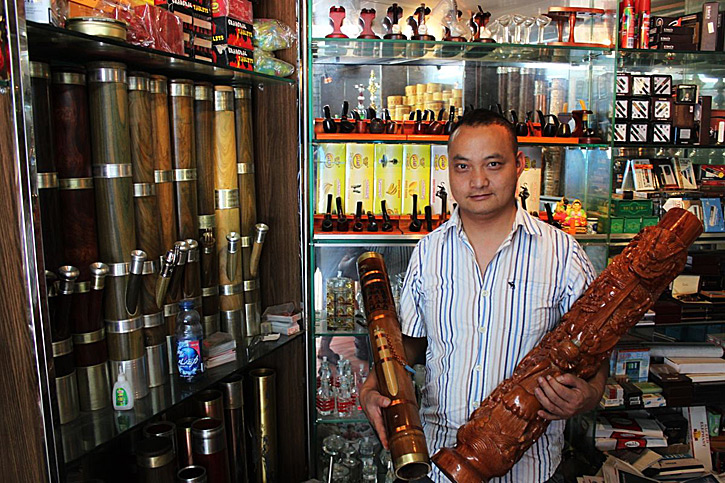 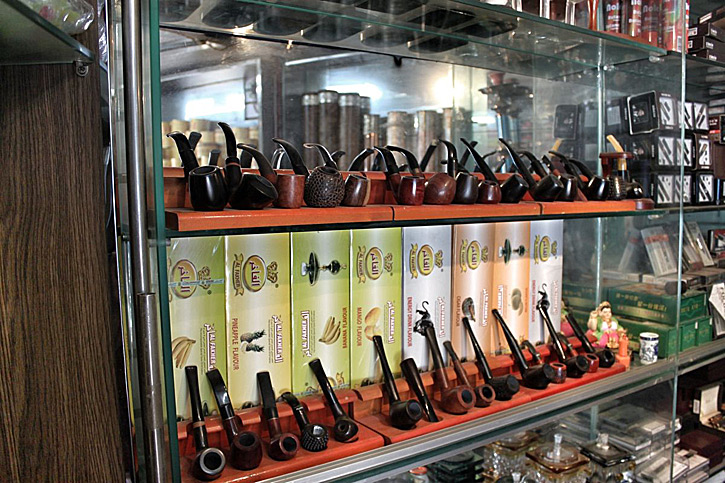 What keeps people intrigued and sometimes coming back, however, is the widespread acceptance of tobacco and smoking in general. Another pipe salesman Mr. Fu sells almost exclusively water pipes. It looks and works like something you might more comfortably know as a bong. These "pipes" sell for between twenty and two thousand dollars based on material used for the making. In the picture of him above, he’s holding two bongs, his cheapest made of bamboo, and most expensive hand carved from a Chinese yew tree (ironically imported from Burma). However at the back of this shop, and right behind him in the picture, he has a small selection of about twenty western style pipes. For sale here is a glue-pressed meerschaum pipe available for about two dollars, but he also has nice Greek Amadeus briar in a billiard for around a hundred dollars. Some of the fancier places in town sell meerschaums in the thousands of dollars.

There are a few other interesting cultural smoking methods of pipe smoking. Such as small hand-held bamboo pipes for sale through which people smoke just like you or I would, albeit with much less tasty tobacco. And then many of the elderly will purchase large sheets of tobacco in big bundles, take them home and roll them into cigars which they shove in to metal pipes and then smoke slowly all day.

The province I live in makes it’s own local "pipe tobacco" available at most tobacco places in town. But this tobacco is the very same as what is sold for the water pipes and for roll-you-own cigarettes. It makes a decent cigarette, but I wouldn’t want this in my pipe. Many locals, not knowing any better however, do smoke it, some probably even in a Dunhill or expensive meerschaum. Unfortunately this tobacco is as dry as newspaper and tastes about the same too. But it is cheap, about four ounces for two dollars. 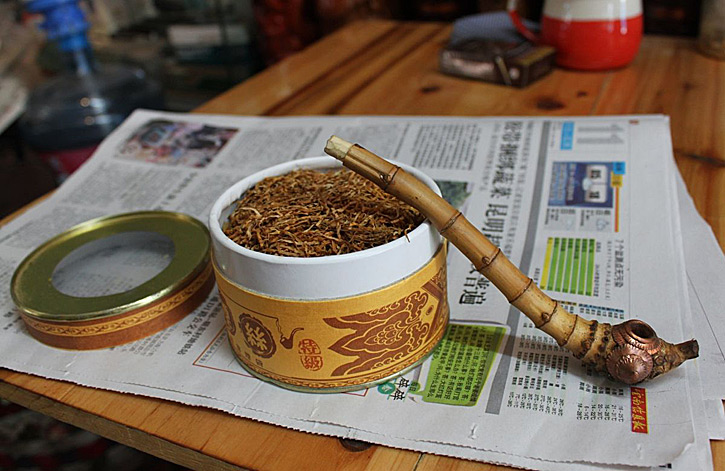 We all know how subjective the taste of tobacco can be, and how sometimes even our own tastes for Virginias or Latakias can change with the seasons. One time in a taxi on the way to the airport I lit up with the help of the driver’s lighter, and he spends the majority of the trip telling me my Astleys 109 is not as fragrant as the local cigarette tobacco. "It tastes different than it smells," I try to assure him. Yet he insists that I’m just a foolish American who can’t understand the wonders of the Chinese Tobacco Monopoly and the quality of their products. He doesn’t smoke himself of course, but he spends all day enjoying the smoke of others. I suppose I should have picked something with a better "taxi note". But then I remember, I don’t really mind the complaining as long as I can smoke in the cab.

There are great international tobaccos here, and even some wonderful pipes, though they are not always easy to find or differentiate from the fakes. But, however new pipes may be to China, things are beginning to shift. The availability of quality briar and German vulcanite on Chinese e-commerce sites makes that plain. The first crop of local pipe tobaccos have emerged from places like Shanghai, and while they likely leave much to be desired, they are a step in the right direction. I fully expect within 5-10 years there will be well known Chinese pipe craftsman displaying their pipes at the Chicago (or Beijing?) pipe show. And, with a little luck, in due time, a quality Chinese pipe tobacco brand might even rear it’s head. 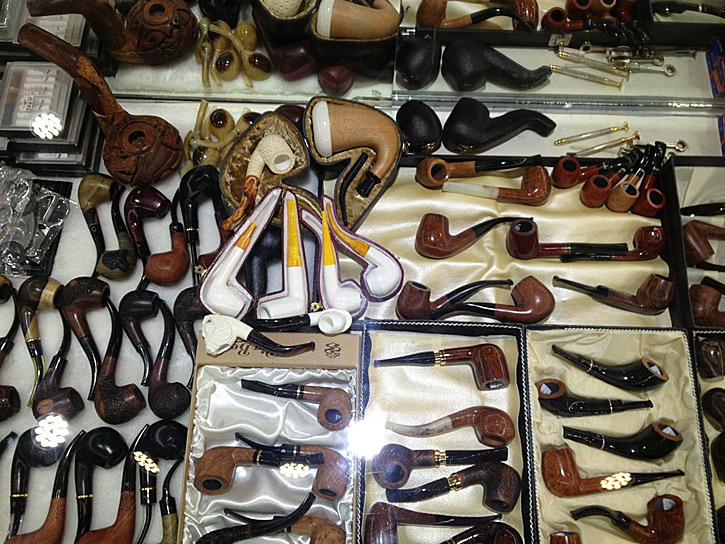 A Night with the Chongqing Pipe Club