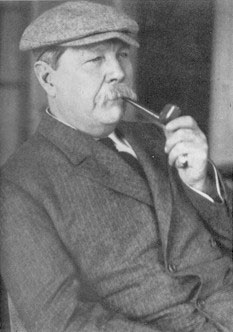 The irony is palpable. Attempting to understand British author Sir Arthur Conan Doyle, who created one of literature’s most enduring characters—the great detective Sherlock Holmes—one must become something of a sleuth himself.

It is a well-known fact, of course, that Sherlock Holmes smoked. Oh, did he ever smoke. In Doyle’s stories, cigarettes were part and parcel of his character, and even though he is most often seen wearing a deerstalker hat and puffing on a calabash pipe, Doyle never put the curved gourd in the detective’s hand or between his lips.

Holmes’ foil and sidekick, Dr. Watson, was a cigar and pipe smoker, while the detective preferred "oily clay pipes" and shag tobacco, the stronger the better. Holmes was known to smoke a variety of pipes, including a cherry wood and even churchwardens.

Doyle’s tobacco favorites, however, are a little more difficult to pin down. There is no doubt that he smoked, and liked his cigar as well as his pipe. But a couple of recent biographies leave a lot to be desired when it comes to finding out just what kind of tobacco and what sort of pipe the venerable doctor and famous author enjoyed.

Some writers have posited that if you know Holmes, then you know Doyle. While that might be 90 percent accurate, it does not fill in all of the gaps about Doyle’s smoking preferences.

Doyle was knighted, not for his Holmesian stories, but for his writing about the Boer War of 1899 in which he served as both physician and war correspondent. History shows that he enjoyed both cigars and pipes, but discovering brands and shapes is not easily done.

Perhaps the good doctor wanted to leave at least one mystery unsolved. 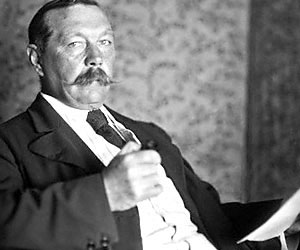 Stage actors and filmmakers are responsible for the image most often seen of Holmes—thoughtfully deducing some crucial clue, a curl of tobacco smoke rising from gourd calabash beneath the deerstalker hat.

Basil Rathbone is the actor who brought Holmes to life on the big screen in the 1930s and ’40s. More modern versions don’t measure up, especially the latest two films from British director and screenwriter Guy Ritchie: Sherlock Holmes and Sherlock Holmes: A Game of Shadows, starring Robert Downey Jr., as Sherlock Holmes, and Jude Law, as Dr. John Watson.

The Ritchie/Downey production is more slam-bang/super slo-mo than super sleuthing. Rathbone is safe for the moment.

All this is to assume that Doyle the physician/author was the alter ego of Holmes the detective. This assumption, too, takes a bit of deducing.

Holmes was actually fashioned from one of Doyle’s professors at the medical college at Edinburgh, Scotland. Dr. Joseph Bell was not only an eminent surgeon and teacher, but he possessed also amazing powers of observation. He taught his students that doctors had to be great diagnosticians as well as healers. They did this by being observant and deducing results from facts.

It is also obvious that Holmes was also made up of parts of Doyle himself. They both smoked a pipe, of course. But, there are other similarities: they both boxed, were tall, energetic, strong, untidy, and collected scraps of notes. Both spoke French and German and enjoyed a good joke.

So, then, Doyle was Holmes and Holmes was Doyle. If that is the case, my Dear Watson, then it can be assumed that Dr. Doyle enjoyed strong shag cut tobacco, which he smoked in a variety of pipes.

Photos of Doyle show him with a bent billiard, perhaps, a straight billiard and many other styles that are not discernable. But it is imminently clear that he indeed smoked a pipe.

What is also clear is that Arthur Conan Doyle was a prolific writer, smart if not brilliant. 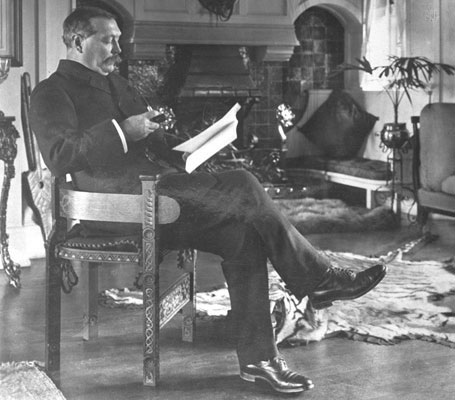 He was born in Edinburgh, Scotland, May 22, 1859, although his family was Irish and Catholic. His father, Charles, like his father and brothers, was a talented artist, but with major flaws.

Charles’ father, John Doyle, had been one of the great satirical political caricaturists of a generation. His weekly cartoons became widely circulated and celebrated. John Doyle traveled in such social circles with Queen Victoria, Sir Walter Scott, William Thackeray and even Charles Dickens.

John Doyle’s sons also became famous artists, but Charles was not in the same league as his brothers, who went on to establish big reputations.

In an effort to break away from the shadow of his brothers at the age of 17, Charles Doyle moved to Edinburgh. He found work in a government post, possibly through the reputation of his father, and began to sketch. He later married Mary Foley, a fairly well educated young woman for the Victorian age.

By the time Arthur Ignatius Conan Doyle was born,Charles was already slipping mentally, relying heavily on alcohol to get through a day. The family was actually living in poverty in a city known for its dark and evil shadows for the poor.

Mary worked hard to provide for her children and made certain they acquired good educations. The brightest of the nine children was Arthur, upon whom she especially doted, since he was her first son. Throughout life, Doyle was equally devoted to his mother, and wrote volumes of letters to her almost daily.

Mary passed on her love of Celtic storytelling and reading to her son. Like his mother, Arthur devoured books and relished his mother’s stories, which bloomed and flourished in his imagination.

With the help of his mother, family and others, Doyle finished Jesuit schools and then headed off to the University of Edinburg’s Medical School, one of the best in the world then and now. He entered in 1876 and graduated in 1881.

The threat of poverty hung over the family like a black cloud. Charles Doyle was never much of a provider, drinking up most of the family’s income. Eventually, he had to be institutionalized.

After medical school, Arthur Conan Doyle hung out a shingle and began writing in earnest. By 1886, he had penned the novel A Study in Scarlet in which he introduced a detective by the name of Sherlock Holmes.

Also by this time, Doyle had been heavily influenced by the stories of Edgar Allen Poe, especially The Gold Bug and The Murders in the Rue Morgue.

In fact, Doyle once said that he owed a great deal to Poe and suggested that Poe had created the greatest detective in literature (a claim sure to be disputed by Doyle’s now global legions of fans, as well as those who consider Holmes sacrosanct).

But one point Doyle wrote is no doubt true: Poe, he said, made the detective story work as literature.

Like his famous detective, Doyle was more than the sum of his parts. He was an adventurer and world traveler. He once served aboard a whaler as the ship’s doctor. A social crusader in later life, supporting the downtrodden and women’s emancipation, he also became very wealthy. He was asked to endorse products, which he refused to do, but the image of Sherlock Holmes was found on many commercial goods, including tobacco, as today.

Doyle also tried his hand at writing plays for the theater, some of which enjoyed mild success. Some of this theatrical output was based upon his own books. 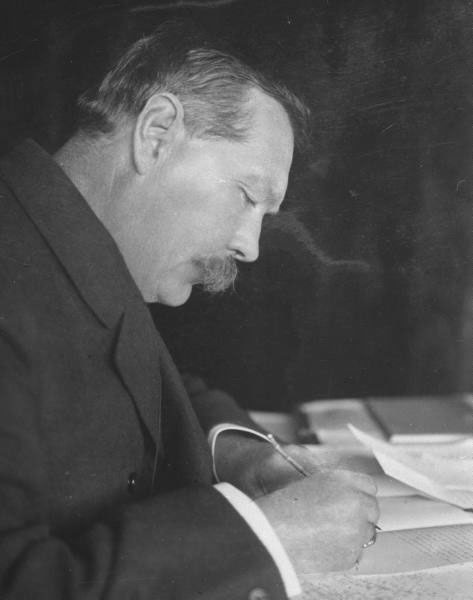 Prior to the outbreak of World War I, Doyle was also writing short fiction, some of which bordered on fantasy, horror, the supernatural and science fiction.

When war broke out between Germany and Great Britain, Doyle, then 55 years old, wrote the British war department. One of the Empire’s most famous citizens wanted to enlist.

Although he was turned down, he insisted that although he had not practiced medicine for quite some time, he could work on the battlefield, tending the wounded.

That suggestion, too, was denied. Presumably, the British Empire did not want its famous author obliterated in the trenches as soldier or surgeon.

Doyle then turned his immense imagination to helping the military department solve problems. He invented a kind of fork device to put on the front of naval warships to explode underwater mines before they hit the ship. He also invented an inflatable rubber belt that would keep sailors afloat in the sea. Inflatable life vests were created, thanks to Doyle.

When not attempting to invent some sort of military safety device, Doyle wrote propaganda for his country, in pamphlets in addition to making public speeches for the war effort and social injustices.

After the war, Doyle wrote a six-volume history of the conflict, The British Campaign in France and Flanders.

During this post-war period, he entered in earnest a phase of his life that defined him up to the end. He became a spiritualist, believing that the human personality did not end in death, that there was a being on the other side that survived death.

He also came to believe in fairies, and claimed that there was a human existence beyond death that paralleled the physical world. He also believed that that world could be reached through communication.

Doyle wrote and toured widely espousing his beliefs in spiritualism, coming to America several times to speak on the subject. Upon each occasion, American journalists penned fantastical stories about the admired author, which produced even wilder headlines.

It was Doyle’s faith in winged fairies that began to erode his enormous reputation, and even relegate him to "kook" status by many in the public.

But Holmes fans never wavered in their loyalty to the great writer, and remain faithful today. Thus, Sherlock Holmes remains the greatest detective in literary history. There are Sherlock Holmes Societies across the globe and even today, the mastermind of deduction continues to grab new converts and readers.

In all, Doyle wrote 60 stories about Sherlock Holmes. That is not anywhere close to his total output of short stories, essays, histories, novels, journalism, volumes of letters and other documents, in addition to stacks of notebooks and diaries.

The Holmes stories have been translated into every written language on the planet. In fact, some Holmes societies view the great detective as real flesh and blood.

Doyle could write anywhere, and often did, breaking off in mid-sentence to enter conversation going on around him, and then return as if he had been concentrating all the while on pen and paper.

Sir Arthur Conan Doyle was an extraordinary man, just as his detective Sherlock Holmes was an amazing literary figure who bloomed larger than life, even to the point of overshadowing his creator.

Related Article: The Great Detective and His Pipes: By Russ Ouellette