The Great Detective and His Pipes 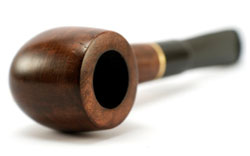 The time is the mid-1880s and the location is London, England, specifically a second-floor room at 221B Baker Street. The room is rather dark, and there is only one figure in residence at the moment. He’s a tall, slender man with a receding hairline wearing a well-worn dressing gown. He sits quietly in intense rumination, obviously concentrating on something which puzzles him. A thick wreath of blue-white smoke surrounds his head and blankets the rest of the room. Of course, the object of this observation is none other than the world’s only professional consulting detective, the redoubtable Sherlock Holmes.

Certainly Holmes is one of the most iconic characters in crime fiction, as is evidenced by his amazing popularity after more than 100 years since his creation. No literary creation has been featured in films, television programs, radio serials, spoofs and pastiches more than Holmes. His creator was a not-very-successful physician named Arthur Conan Doyle, who aspired to be a writer, and submitted his manuscript for "A Study in Scarlet", which wound up being published in Beeton’s Christmas Annual. The story evoked a groundswell of interest, so much so that Holmes wound up as a regular feature in the Strand magazine. 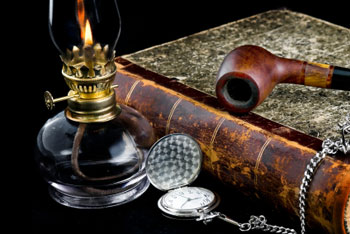 Doyle, while not being the greatest serial writer when it came to continuity, had a remarkable ability to flesh out his characters and to make them feel like real people. He gave his creatures human flaws, quirky habits and proclivities, and backstories that intrigued and involved the reader. One of the ways he did so was through the characters’ use of tobacco. This was a sensible thing to do as the use of tobacco in its many forms was quite popular at the time, along with the fact that peoples’ choices regarding their favorite pipes, tobaccos, cigars, etc. are very personal and reveal much about the individual.

Holmes was an enthusiastic tobacco user. In the various stories and novels, the readers would read about his pipes and tobaccos, cigars, cigarettes and even snuff. In particular, Holmes pipe tobacco preference seems to be an odd one; he was known to smoke a black shag, which generally indicates a lower quality tobacco, as that’s what most shag tobaccos of his time were. But, in a way, it makes sense, too. Since he always smoked while contemplating a problem, it would seem that a stimulating smoke would be the way to go, and a common thread among cheaper pipe blends at the time was that they usually had a fairly decent nicotine content.

He routinely would smoke cigars in a more social setting, like after a dinner at a restaurant with Watson. Cigarettes were reserved for those times when he was full of nervous energy, or, in one special situation when he chain-smoked them so he could drop ash on the floor in front of a wall which covered a hidden passageway so he would know if someone had entered or left, as they would disturb the ashes.

Although I can’t recall any snuff use, it’s known that Holmes was given a bejeweled snuff box by a well-heeled client upon the successful completion of a case.

Speaking of Watson (Dr. John H. Watson, Holmes friend, fellow adventurer and biographer), he enjoyed his pipe often, and would join Holmes for the occasional cigar. Watson’s tastes ran to the less powerful Arcadia Mixture (with its fluffy, white ash), or, at times, what is referred to as "ship’s tobacco. I couldn’t find any direct information on it, it may be similar to Schipper’s Speciaal, a ribbon-cut mixture of Virginia, Burley and dark-fired Kentucky, made in the Dutch style. It would have been stronger than Arcadia, but not as heavy as the black shag. 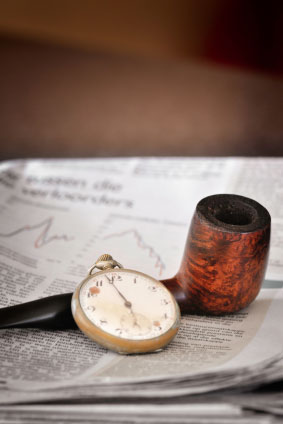 Holmes not only partook of the noble weed, but he was an expert of sorts about tobacco. He wasn’t into the blending or making of tobaccos, but he wrote a monograph in which he described how to identify 140 different tobaccos by examining the ash. In one story, he was able to get closer to the solution of a case by being able to identify an Indian trichinopoly cigar from a butt and its ash. Holmes also noted that a pipe was one of a person’s most intimate possessions and that one might infer a great deal about the individual by careful examination of his/her pipe.

Holmes would have been what I call a "habitual" pipe smoker, rather than a "hobbyist". Most of you who are reading this would fall into my definition of a hobbyist; that is- someone who usually has a number of pipes, might even be a collector, and rarely smokes the same tobacco for an extended period of time. The hobbyist also likes to be well-informed about his/her pipes and tobaccos. The habitual smoker will have a relatively small number of pipes, rarely does maintenance on them, and smokes the same one or two blends all the time. In a nod to our politically correct times, the modernized BBC version of Holmes, played by Benedict Cumberbatch, partaking of … nicotine patches.

In the stories and novels, Holmes had three pipes- a clay, a briar and a cherrywood. His clay, a typical churchwarden style, was smoked often enough that it had colored until black. Watson referred to it as his "disreputable" clay, which he smoked when he was in a "disputatious" or argumentative mood. Little was said about his briar other than to be described as "oily", and next to no information was given about his cherrywood. This collection would seem to make sense considering that Holmes kept his tobacco in the toe of a Persian slipper.

So the obvious question that one might ask would be "What about the calabash?" Nowhere in any of the 60 Holmes pieces that Doyle wrote was there a mention of a calabash. How did Holmes become associated with the large gourd and meerschaum pipe? Because of William Gillette, an American actor who portrayed Holmes on the stage in the early 1900s. Gillette (who built the famous Gillette Castle in Connecticut) wanted a pipe that was easily visible to the audience, but with a deep, pronounced bend that wouldn’t block the audience’s view of his face, and would keep the smoke out of his eyes. With a proverbial wink and nod, if you got a view of the mantel at 221B in any of the 1980s Granada TV series Holmes stories, you would notice a calabash lying on it, but Jeremy Brett (as Holmes) never smoked it.

When thinking of famous pipe smokers, a number of people come to mind- MacArthur, Bing Crosby, Mark Twain- but who would have thought that the most renowned would be someone who never existed?