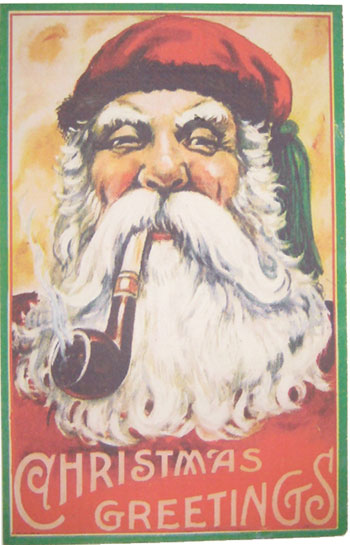 Santa on the rooftop and down the chimney, a Christmas romance, with many apologies to Clement Clarke Moore.

‘Twas the night before Christmas when all through the house, not a creature was stirring, except for Santa, who was smoking his pipe.

Yes, Virginia, that same old jolly elf himself is about to descend upon us. He will bring toys and joy and then kick back to light up his pipe. Maybe even sit a spell and look about as tobacco smoke swirls above his head.

Or, as author Washington Irving wrote in A History of New York ". . . .And he lit his pipe by the fire, and sat himself down and smoked; and as he smoked, the smoke from his pipe ascended into the air and spread like a cloud overhead. . . .and. . . .the smoke spread over a great extent of country; and . . . .the great volume of smoke assumed a variety of marvelous forms. . . shadowed out palaces and domes and lofty spires, all of which lasted but a moment, and then faded away, until the whole rolled off, and nothing but the green woods were left."

Those lines are thought to have inspired Moore to write his famous poem in tribute to St. Nick and the Night Before Christmas.

So Santa smokes a pipe. He always has, apparently, right from the first mention of the old boy in red, fur-trimmed suit.

One of the most highly recognizable faces on the planet is usually accompanied by a cheery smile, red cheeks, a cherry red nose, all framed by a pipe.

Santa Claus has been a pipe smoker dating back to the early 19th century.

And, he has amassed a sizable collection of pipes: churchwardens, petite clays to the artistically beautiful Tyrolean pipe, briars, corncobs, all sizes and shapes.

If you Google Santa Claus and pipes you will find a trove of information on the Internet. You will even discover that Moore, a man who detested smoking in any form, penned the famous "Night Before Christmas" poem. This may be the reason that some scholars have postulated that a fellow by the name of Henry Livingston Jr. of New York, who married a woman of distant relation to Moore, actually wrote the famous poem.

The Legend of Saint Nicholas even has its own web page. Here you will learn that the man was indeed a saint. He was born in the third century on what is now the southern coast of Turkey. He became the Bishop of Myra.

Saint Nicholas was a generous sort, giving away his family’s wealth. He especially loved children, so the story goes. He died Dec. 6, in AD 343, which became a celebration known as St. Nicholas Day, naturally.

Of course, through the ages, Santa has been transformed by many stories and legends. And the jolly fellow even had some real transformations during the Reformation. But by the early 1800s, he was pretty well ensconced in the New York Dutch tradition.

Which brings us back to Washington Irving. In 1809 when he wrote a satirical history of New York, he included St. Nicholas with his clay pipe. 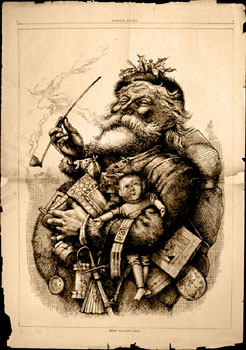 And that has been the one thing that remains constant about Santa after the American colonies gained independence and began to secularize Christmas.

Now, if you are the inquisitive type, you might also want to ask what sort of tobacco Santa might have smoked.

At least one enterprising fellow, who calls himself "The UruguayanGamer" says he believes that since "pipe tobacco has changed radically since the late 18th century when he may likely have started smoking; though if he gets sentimental, Santa might smoke Grousemoor, the 200-year-old tobacco flavor."

Grousemoor, as you might be aware, is produced in England’s Lake District by Samuel Gawith. Manufactured in the heart of Lakeland for over 200 years, the blend and its flavor have never been revealed since its beginnings two centuries ago. That even sounds like Santa: Grousemoor for a cold North Pole night by the fireplace.

"TheUruguayanGamer" also says that through his exhaustive research, he has discovered that "Santa was a big fan of Edgeworth tobacco."

Well, indeed, if you check out eBay, you’ll find that Santa posed for Edgeworth advertisements in the late 1940s. He also didn’t mind sitting for cigarette ads in that era as well, though we probably should forgive him for that bit of profiteering on his celebrity.

Then, he apparently also enjoyed Prince Albert, according to some reports.

Being the jolly fellow that we all know and love, he probably wasn’t too fussy about his tobacco. It’s obvious he was not a picky eater. The man loved his victuals.

And if you continue your Internet search of Old St. Nick, you will also find him clenching a variety of pipes, from the previously mentioned churchwardens to cobs. 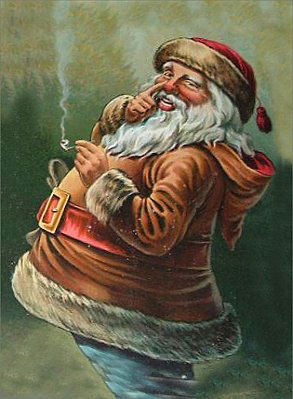 One of the best images of St. Nick is from 1863 by Thomas Nast, an artist for Frank Leslie’s Illustrated Newspaper and later as an artist for Harper’s Weekly.

In the turmoil of the American Civil War, Nast drew Santa with a long pipe, reminiscent of his German homeland, with a great plume of smoke swirling above Santa’s head.

Nast went on to draw many more Santas, just about always with a pipe nearby.

You can, uh, now find that Civil War image for your, um, I-Pod case. In color.

So, it is probably little wonder that revisionists want to paint Santa as the jolly old elf without a pipe these days. We like to debunk all of our icons, even St. Nick.

But, don’t be fooled by that malarkey. The man with the full bag on his back was and always will be a pipe smoker. It would not be Christmas without Santa standing by a fireplace, one hand holding a pipe, the other with a finger beside his nose.

The man loved his pipes and his tobacco. And if you reflect for a moment on that image of Santa with pipe, around for more than 200 years, that should prove the icon of Christmas, the man who finds out whether or not we have been naughty or nice, makes his own choices and follows his own mind.

And, maybe, that is one of the important lessons of Christmas.

A pipe, a fire, a tree and the sound of eight tiny reindeer on the rooftop and the image of Christmas:

The stump of a pipe he held tight in his teeth,
And the smoke it encircled his head like a wreath.

He had a broad face and a little round belly,
That shook when he laughed, like a bowlful of jelly!

He was chubby and plump, a right jolly old elf,
And I laughed when I saw him, in spite of myself!

A wink of his eye and a twist of his head,
Soon gave me to know I had nothing to dread.

He spoke not a word, but went straight to his work,
And filled all the stockings, then turned with a jerk.

And laying his finger aside of his nose,
And giving a nod, up the chimney he rose!

He sprang to his sleigh, to his team gave a whistle,
And away they all flew like the down of a thistle.

But I heard him exclaim, ‘ere he drove out of sight,
"Happy Christmas to all, and to all a good-night!"