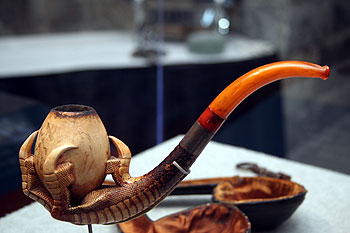 VIRGINIA BEACH, Va.– There it was – a priceless relic of the Civil War, displayed in a simple Plexiglas box in a small Virginia museum, its graceful lines accented by a dramatic beam of light, its bowl as scuffed and dark as Black Cavendish.
The pipe itself was beautiful, yes-but it was its provenance that made it so exciting: Its owner had been none other than Jefferson Davis, President of the Confederate States of America during the Civil War.
An avid Civil War buff and pipe smoker myself, I had never known of its existence until a recent trip to Virginia Beach, Va., when I visited the prison at Fort Monroe where Davis had been incarcerated for two years after the defeat of the Confederacy by Union forces.
Davis was a pipe smoker long before he became the leader of the ill-fated breakaway Confederate states in 1861. In fact, there are recorded discussions of his “corncob” when he worked his Mississippi plantation, Brierfield, so named for its tangled woods and forests.

Historians have written that Davis actually worked in the fields beside his slaves, and smoked his cob while at work. 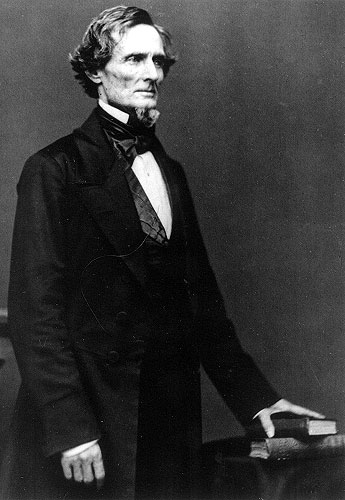 Davis was born into a wealthy Mississippi plantation family and given a top-notch education, eventually making his way to West Point. He was not a particularly good student, considering good times and beautiful women more interesting than studying dusty military tactics.
After several years in the U.S. Army, and participation in the Mexican War with many of his West Point classmates, he resigned his commission and returned to Mississippi and Brierfield and entered politics as a U.S. House member, and then Senator from Mississippi.
There is not a lot of information to be found on Davis’s Meerschaum pipe or if he was a collector during his years in Washington. But there are volumes of information about his participation in the war.
During the brewing secession crisis through the 1850s, Davis cautioned his political colleagues to avoid rushing into action. He opposed war after his experiences in Mexico where in 1847 he had been wounded at the Battle of Buena Vista.
Despite his aversion to war, Davis assumed the role of the Confederacy’s president and he supported the “peculiar institution” of slavery. He and his family owned and traded in slaves in Mississippi.
Davis’s position on slavery was not unusual for the wealthy planter class in the South during the run up to the Civil War. Even though many slave owners opposed the war, most wanted slavery left alone. Even President Lincoln said in his early campaign speeches and in his inaugural address that he would not remove slavery where it existed, but let it die out of its own accord. However, the President would prevent slavery from advancing into other territories and states coming into the Union.
When the crisis came to a boiling point with the secession of Southern states, Davis resigned his seat as a senator, saying he would return home, and attempt to sit out the coming tragedy, or perhaps even take a military command for his state.
But his destiny was already being discussed in the breakaway Confederate States of America capitol of Montgomery, Ala., where Davis was chosen at the CSA’s president.
Reluctantly, he accepted leadership of the seceded states in 1861 and left Montgomery, Ala., soon afterwards. His inaugural in February 1861 in Richmond, Va., was a lively affair, but public sentiment foreshadowed the four long and bloody years to follow.
As CSA President, Davis was in overall charge of the Confederacy’s future. But his fortunes, as well as those of the 11 seceded slave states, rested with its army and navy, both of which were ill-equipped to do battle with the Union, which had the advantage of the military and manufacturing might of the United States under President Abraham Lincoln. 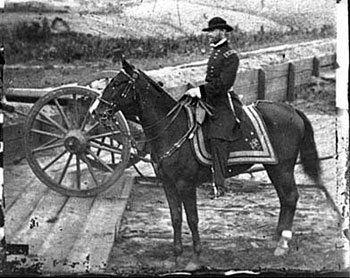 Roughly 650,000 souls were either killed, wounded or listed as missing in action during the four years of war. The staggering statistics still outrank all of America’s war casualties combined. And when Richmond was lost to northern forces in 1865, Davis quickly fled with his family, aided by military officers, friends, and Cabinet members.
His intent was to cross the Mississippi River, collect the Confederate forces that had not yet surrendered, and somehow continue the war. There was even talk of transplanting the CSA government to Havana, Cuba, from whence the fight would carry on. That didn’t happen.
Davis was captured by federal troops in Irwinville, Ga., May 10, 1865, and was moved to Fortress Monroe, a Virginia coastal fort that had never surrendered to the Confederacy during the war. The fort had proved to be a thorn in the side of the Confederacy, since it was south of Richmond and situated on an important port of entry.
Fort Monroe in Hampton Roads, Va., was a stalwart redoubt constructed during the years 1819 to 1834 to protect access to the Chesapeake Bay and the James River. Here, the former CSA president was ignominiously locked into a very spartan cell and charged with treason.
He was kept in the fort’s casemate, which is now a museum on the fort grounds. The inner hallways and arches of the casemate are short and narrow, leading into low-ceiling rooms, many feet thick of brick and mortar. Davis’s re-created jail cell, less than 20-by-20, is equipped with a bunk bed and a diminutive desk with an oil lamp and chair. The desk sits in front of a small window, which was his only view of the world during the time he was held prisoner. Davis was manacled for much of his two-year incarceration until U.S. Army physician Lt. Col. John Craven, ordered the chains to be removed for the prisoner’s health. It was during this time that Craven, who had been assigned the Davis case, walked into the cell and was astonished at Davis’s distressing physical condition.

As Craven talked to Davis, he noticed a beautiful white, Meerschaum pipe on a wall shelf. A pencil sketch of that meeting is now part of the museum collection as well. The pipe is not quite distinguishable in the pencil artwork. The doctor is seen talking to Davis, who appears to be sitting on the edge and rising from his bed.
The Meerschaum is described in the “American Heritage” section of the U.S. Army Historical Foundation web page, as the creation in 1865 of Kaldenberg and Sons of New York, a company in business from 1858 until 1893. The manufacturer worked in Meerschaum, ivory and amber and made pipes, cigar holders, canes, ivory combs. The Davis “meer” pipe bowl is egg-shaped and clutched in the talons of four carved eagle claws. The pipe is described as being 8.5 inches long and weighing 8 ounces.
A silver metal band fits around the shaft and the stem appears to be pure amber and there are some bite marks on the bit. The bowl, heavily scratched and dark from much use, has been colored beautifully by the tobacco of that time, probably a Virginia or Kentucky leaf.

When the doctor mentioned the pipe, he also noticed that Davis was apparently suffering from acute tobacco withdrawal. Until that day, his captors had prevented him from smoking. In response, the young doctor sent an aide to find a stash of tobacco and allowed Davis to fire up his lovely meer.
Davis was so grateful for the gift of tobacco that he told the physician, “This is a noble medicine. I hardly expected to receive it. And, I’ll have to admit the deprivation has been severe.”
It has been reported that at the end of his incarceration, when all charges against him were dropped, Davis gave the pipe to the young Dr. Craven.
However, that account is also a puzzle, since The New York Times reported in its 1897 edition that Davis gave the pipe to Sgt. John Howard, who had been in command of the “detachment of the Chicago Board of Trade Battery which captured Jefferson Davis.
. . . . While Jefferson Davis was a prisoner of war, Howard became well acquainted with him, receiving from the Confederate president a meerschaum pipe and a collection of gold coins.
How the pipe traveled from either Sgt. Howard or Dr. Craven to Fortress Monroe Museum is also debatable.
And then in 1977, The New York Times reported in a United Press International wire service story that the pipe had been stolen, but recovered:
AUGUSTA, GA., (UPI)-The Federal Bureau of Investigation said today that it had recovered Confederate President Jefferson Davis’s meerschaum pipe and case, which were stolen in Virginia. The antiques were taken from a display at Casement Museum at Fort Monroe, Va., six days ago and turned up in the hands of a private individual, the agency said. No arrests have been made.
Uncovering the back story of a pipe is just as exciting as learning the history of its owner. In this case, the owner has long since departed the scene, but the Meerschaum lives on in the Casemate Museum in Fort Monroe, Va.