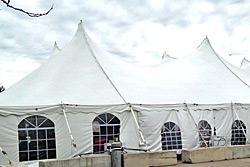 … It gets reported on PipesMagazine.com. For months, I have been contemplating the 2015 Chicago Pipe Show. Finally, I decided that it is the Smoking Tent that I long for most. This is a quiet (?) spot away from the troubles of daily life, where we can meet with old and new friends. We encounter people, young and old, from all walks of life. I have discussed international treaties, home building, body repair, motorcycle riding, medical care, and a host of other topics with experts. FYI, never argue politics with someone who carries a copy of the Constitution with him at all times. 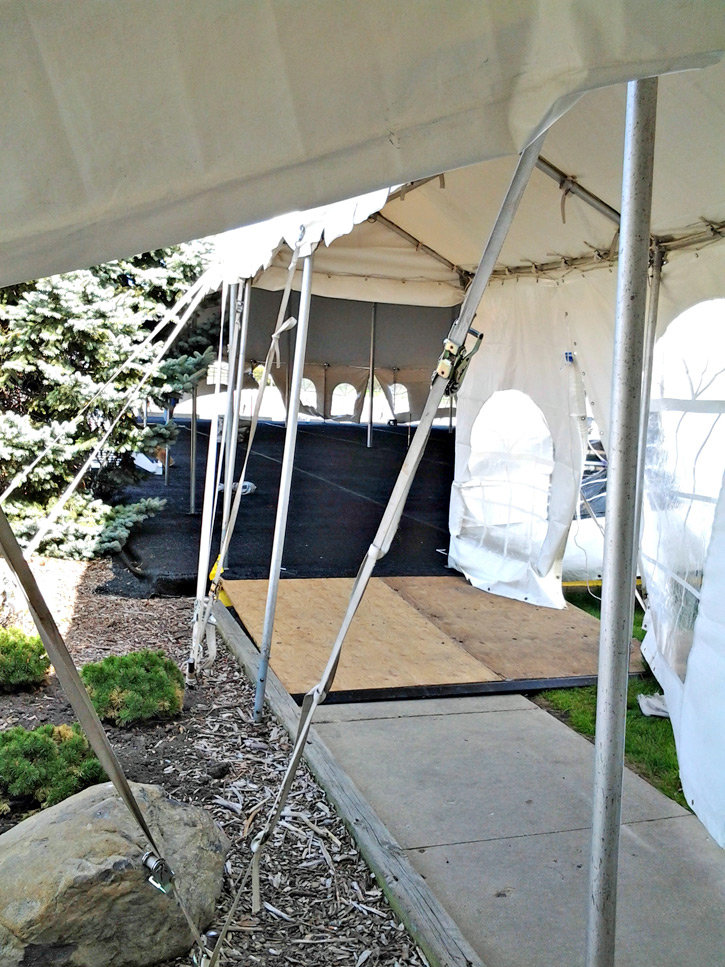 A couple weeks ago, I asked Kevin if he wanted an article on the events in the Smoking Tent and he agreed. Thus, on my ride home from work on Tuesday, I stopped by Pheasant Run to see the Tent being assembled. The floor takes two days, and then the remainder goes quickly. Once the show opens, these chairs and couches are always occupied. 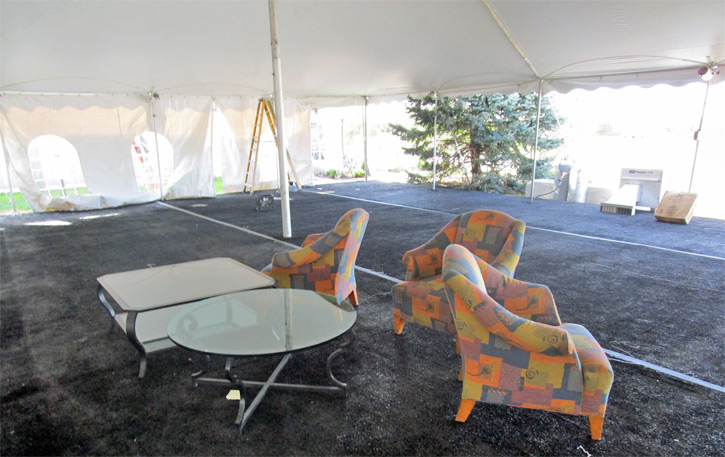 The first official event is the Chicago Cigar Show. Two years ago another group held a cigar show in a larger tent behind the Smoking Tent. It did not go well. The CPCC decided to host their own event in the tent on Thursday night. Various local cigar shops were invited to sell their cigars at tables. The CPCC also coordinated, so no two vendors were selling the same cigars. This year, the format was changed, so the tables were set up in the center of the tent, rather than along the edges. 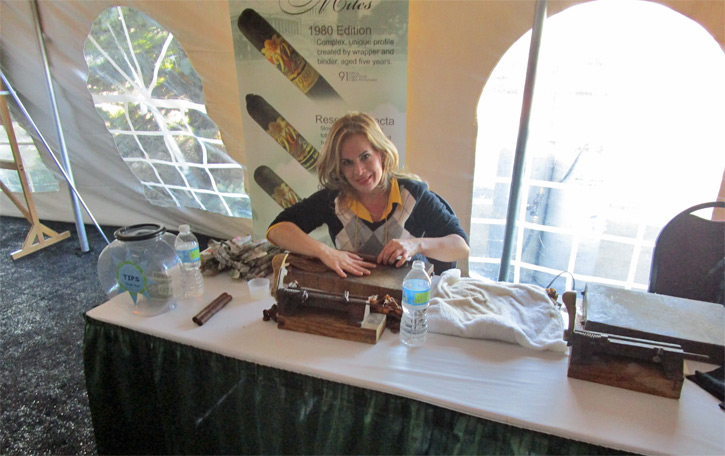 Pheasant Run had several people wandering the tent handing out appetizers. Of course the cash bar is open, except for the very middle of the night. 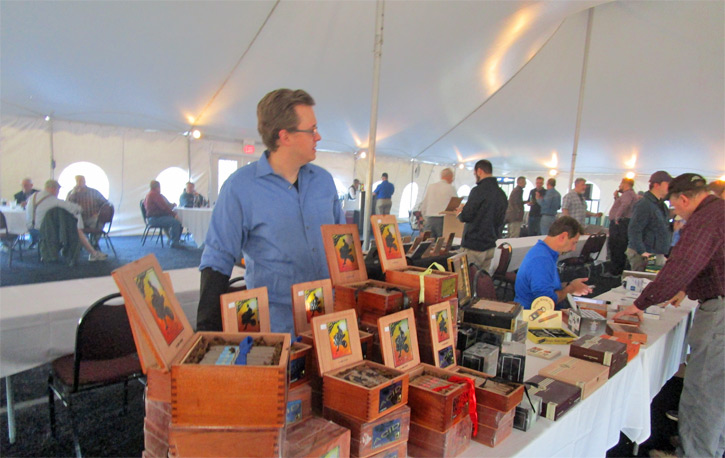 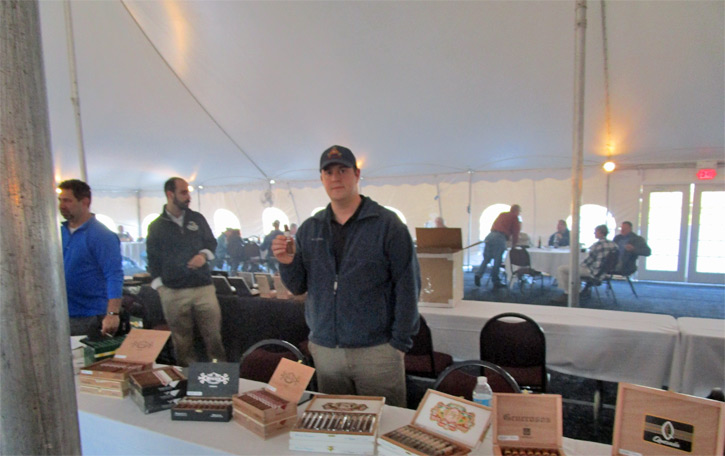 I am exclusively a pipe smoker, but each year I try a cigar. I asked each vendor what they are selling and what they recommend for a novice. They were all very friendly and provided great advice and service. I finally selected a cigar from the B&M that our club goes to for our monthly meetings. I see no reason to convert at this point. The economics of pipe tobacco vs cigar tobacco is just too strong. This assumes that I ignore the cost of the five pipes I purchased at the show. Some of the cigar smokers bragged that they found some really good deals at this event. 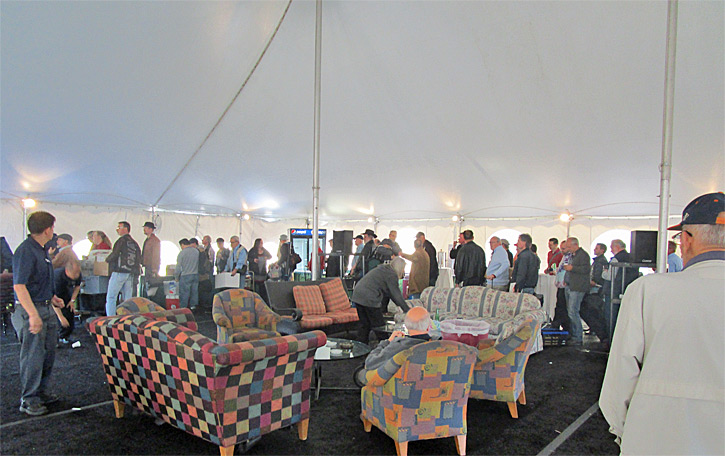 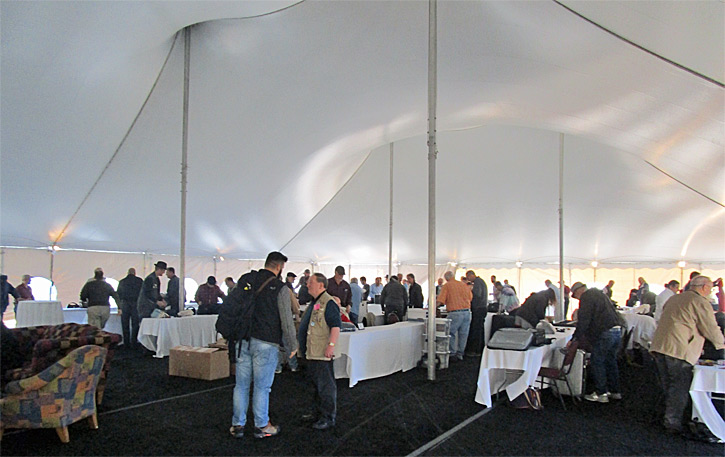 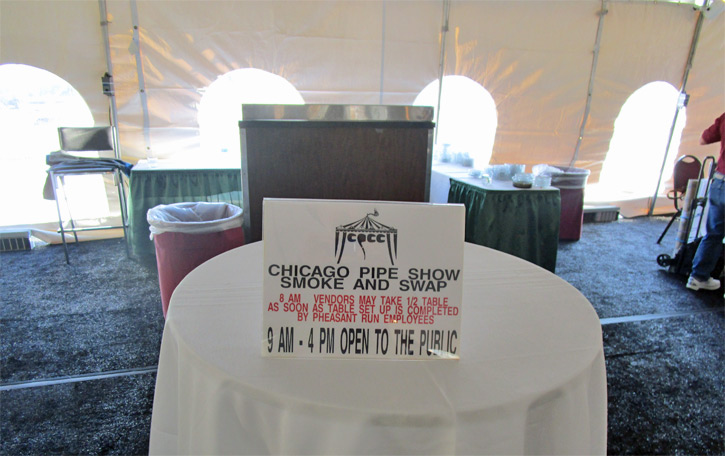 Friday morning, the Smoke and Swap runs from 9:00 to 4:00. But people arrive about 6:00 to get in line for this event. Once Craig opens the event at 8:00, everyone rushes over to claim a half table and set up their items for sale. While the official start time is 9:00, I believe that most people would be thrilled to make a sale, as soon as they are set up. Anything related to pipes is available. Collectors sell a couple of pipes that are used to buy new pipes. Aged tobacco changes hands. Pipe stands and memorabilia are for sale. This year, I bought a partial package of Savinelli filters for $1. At another table I bought a new clay pipe and later a Rhodesian from a man who restores pipes. In previous years, I have seen five pipes, each in the $2K range, purchased. 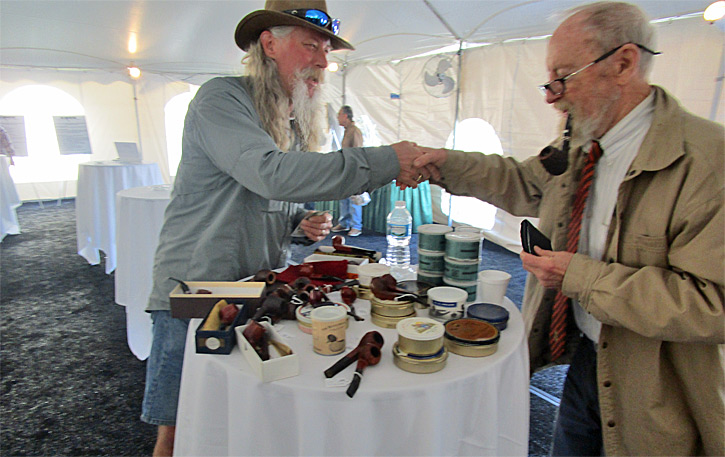 As long as buyer and seller can meet on a price, then everyone is happy. Once a seller decides to give up his spot, someone else will take over. I asked one late comer why he was not there early in the morning. His response: ” What are you talking about? I got up at the crack of noon!” 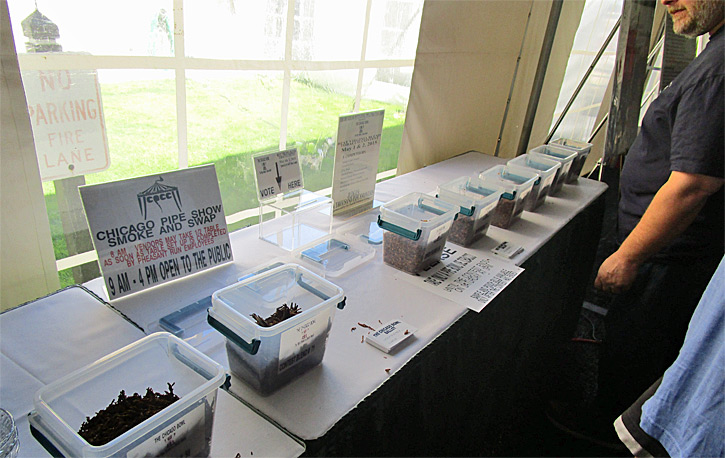 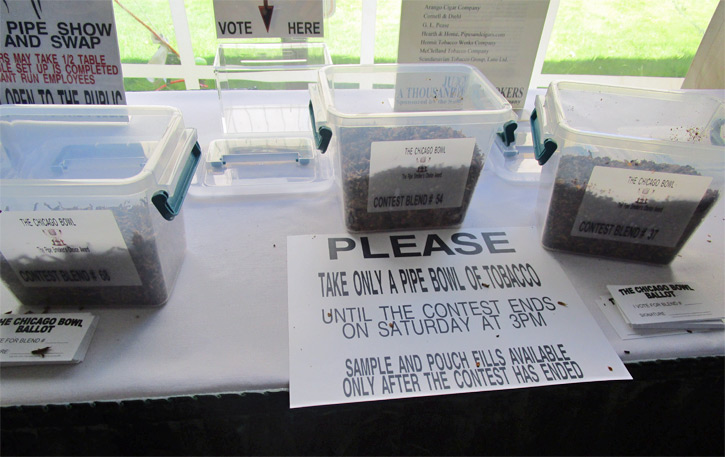 Another fun activity in the Smoking Tent is the Chicago Bowl from 9:00 to 3:00. During this time everyone was encouraged to load a pipe from the eight blends in the numbered containers. After trying as many as desired, each person selects their favorite. I think that I tried five of the blends in my new clay pipe. #27 was my favorite. This turned out to be the winner, McClelland VIRGINIA No. 27 (Matured Virginias). Last year’s contest was for the best English blend. Next year will be for the best aromatic. I know some the people at the Show look down on aromatic smokers. But one of the tobacco vendors that I talked to said that 80-90% of tobacco sold is aromatic. 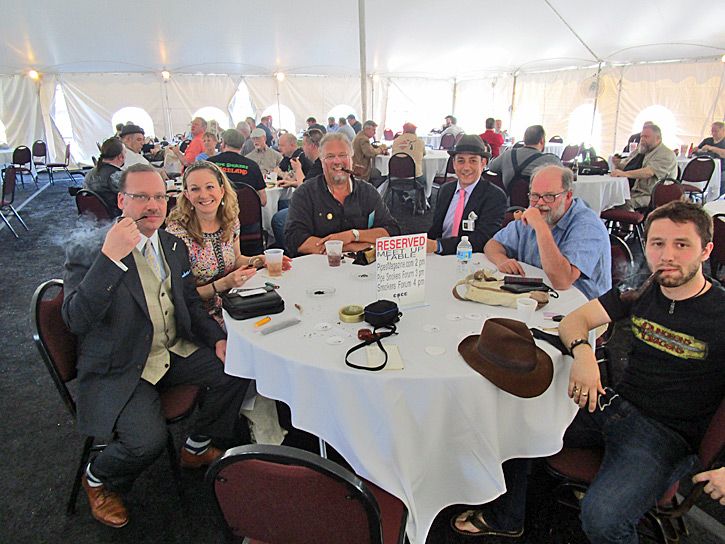 At 2:00, there was a gathering of people from Pipesmagazine forum, in the tent. The picture shows from left to right; Kevin, Lori, Daveinlax, Brian Levine, Jud, and Undecagon. A few other forum members did stop by before and after we took this photo. There were lots of other forum people at the show too, but they missed the meeting. I don’t want to list everyone I met, because I certainly will miss multiple people. Some, like Lonestar, I have known for years and look forward to seeing each year. Others I have never met. Actually, on Wednesday night I went out for pizza with four guys. Halfway through the meal, the topic changed to online forums and I found that peckinpahhombre had been discussing pipes and tobacco with me for 30 minutes. 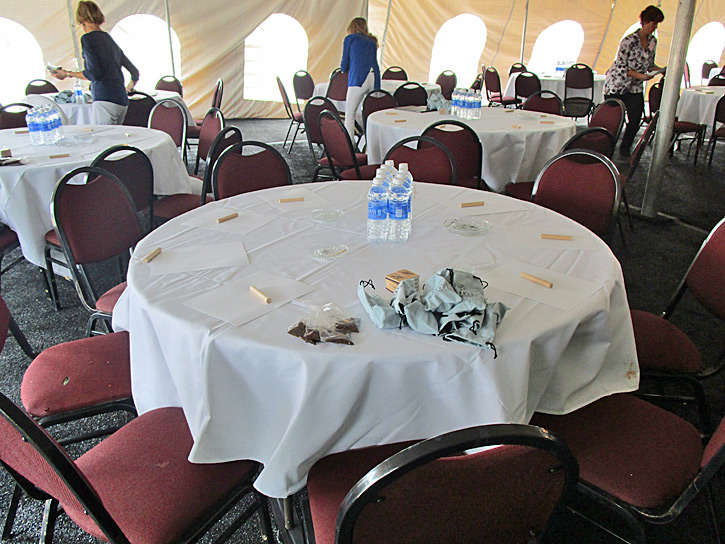 The final event in the Smoking Tent happened on Sunday at 1:00, the 2015 UPCA United States of America National Pipe Smoking Championship. Each year the Saint Charles Chamber of Commerce provides table moderators for the contest. Each gets a pipe, two matches, three grams of tobacco, a piece of paper, a tamper and a bottle of water. 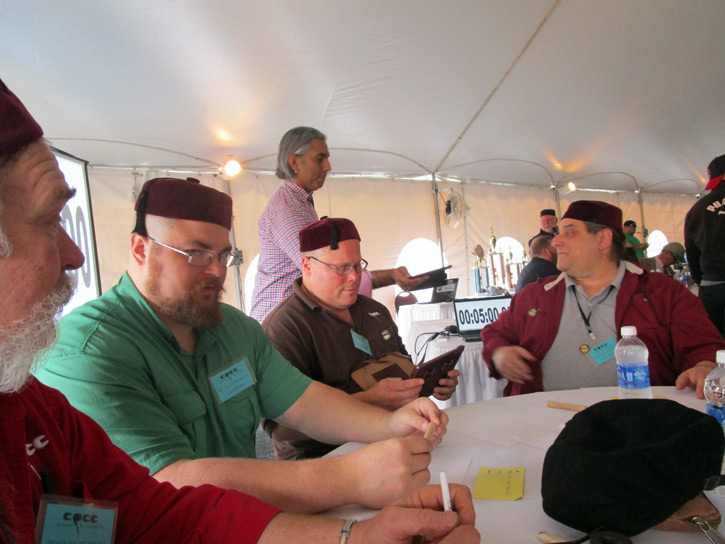 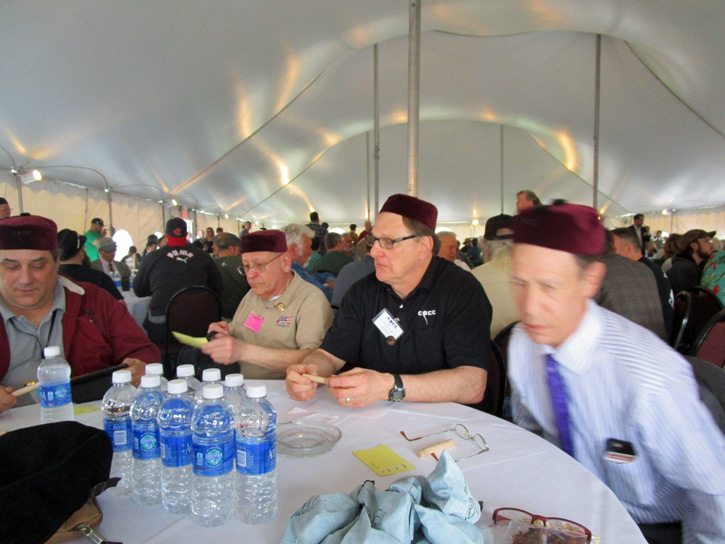 I joined the CPCC team, since I am part of the club. Once we started, we had five minutes to prepare the tobacco and load the pipe. Then we all had one minute to light the pipe with one or both matches. Some tables get real serious at this stage, but our table started telling jokes. Apparently twenty minutes is a common time for lots of people to start going out. I lasted for 27:35 minutes, which is slightly longer than Lori (at 26 minutes) and slightly before Kevin went out (at 30 minutes). 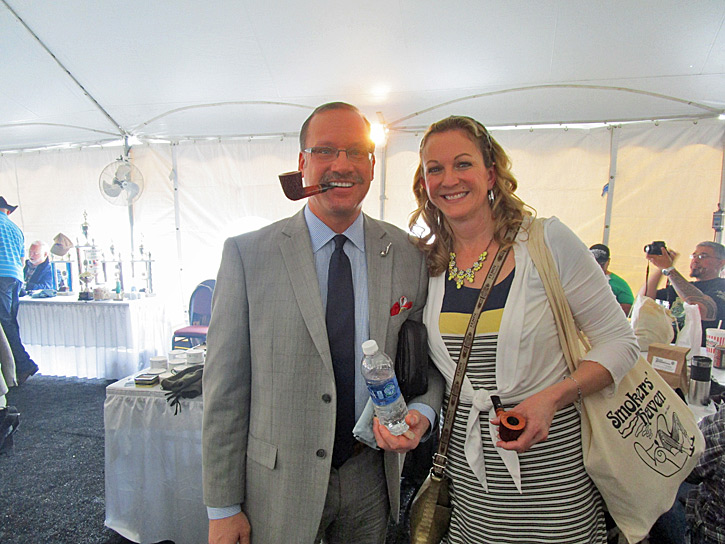 At 1:10:00 there were about ten contestants left, out of the original hundred. Finally, it was down to two contestants around 1:30:00. 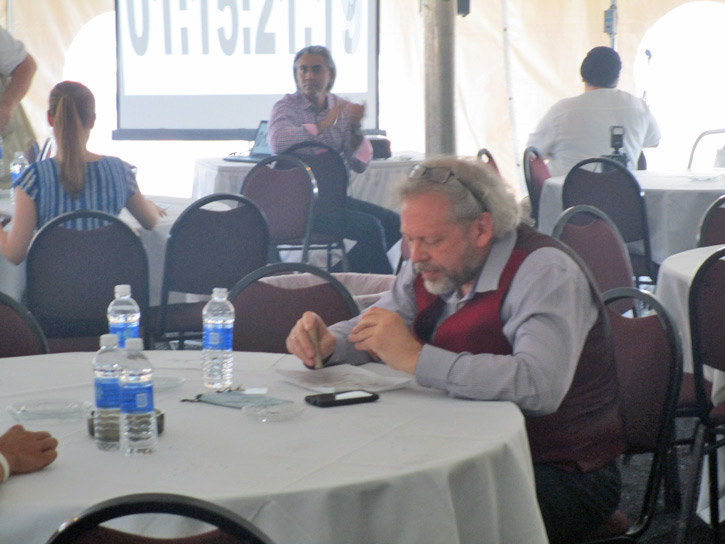 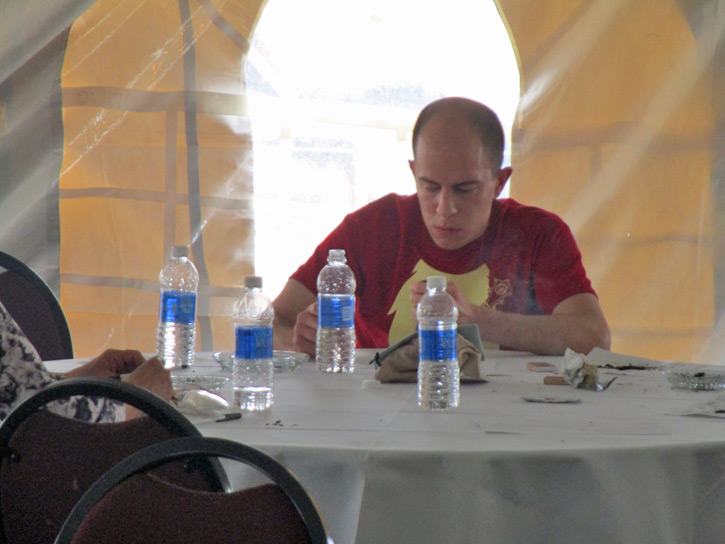 It ended shortly after that. 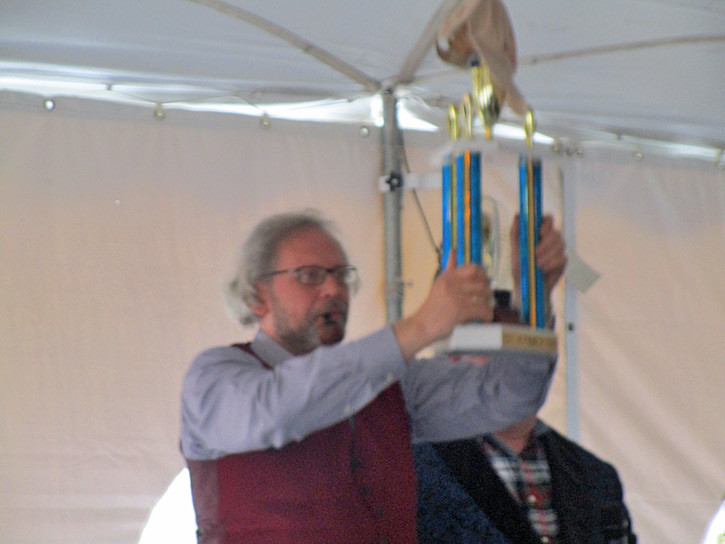 Afterwards they called all the contestants, in order of how long they smoked, and they got an opportunity to pick a prize. The UPCA contest also has a tradition of knocking tampers on the table as each person goes out. The first person who goes out gets a double handful of matches. The contest pipe this year was from Luigi Viprati. The tobacco was a Seattle Pipe Club blend, Deception Pass, blended by Joe Lankford.

Afterwards, the remaining venders start packing up. People start getting ready to return to where they call home. And everyone says, “See you next year!” When I return to work, I will request vacation for 4/27/16 through 5/1/16.

A Newbie’s First Time at The Chicago Pipe Show