The road to New Orleans was (sort of almost) a rocky one. Organizing an event of any size is never an easy task; James, Toby and Wes know that no good party goes off without a hitch, and the first iteration of their pipe show was no exception. Back in January, the New Orleans City Council had passed a smoking ban making it illegal to indulge in lighting up in enclosed public spaces including bars, casinos, and hotels, and then amended it to include festivals and public parks. According to the wording of the ordinance, this should have had no effect on the show because of the nature of the venue at Harrah’s and the nature of the show, and Harrah’s confirmed this with Toby Ducote. The week before the show, though, they caved in to some political pressures and put a kibosh on the entire affair. Toby didn’t miss a beat, though, and secured Generations Hall, an even better venue in my humble opinion, as well as coordinating several other local hotels to offer a discounted show rate. For that alone he deserves a golden pipe, in my book. 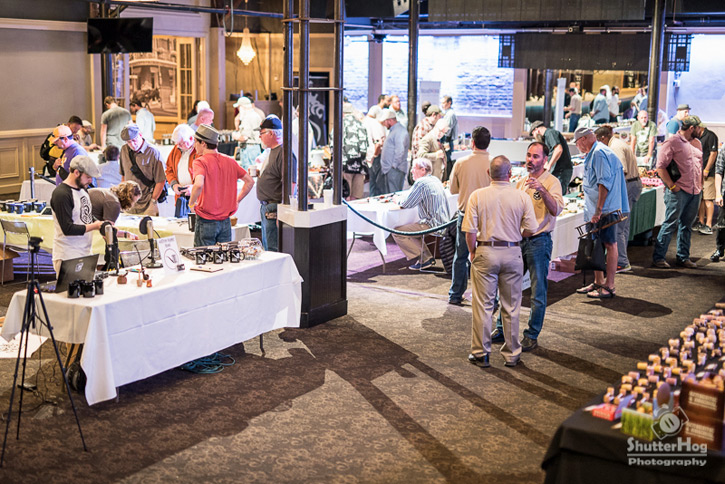 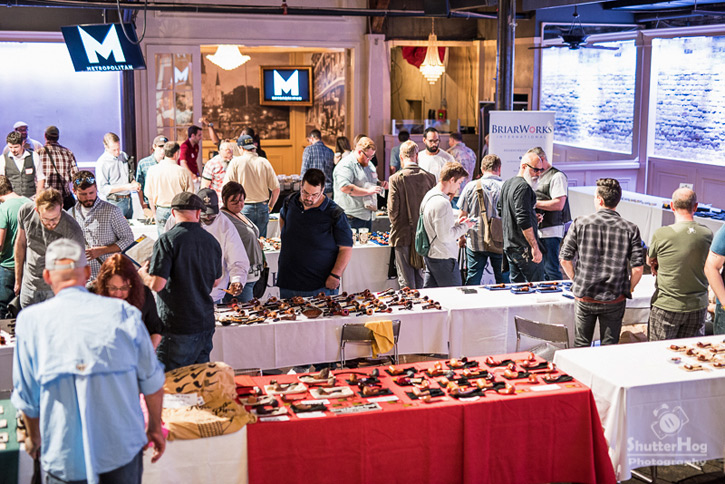 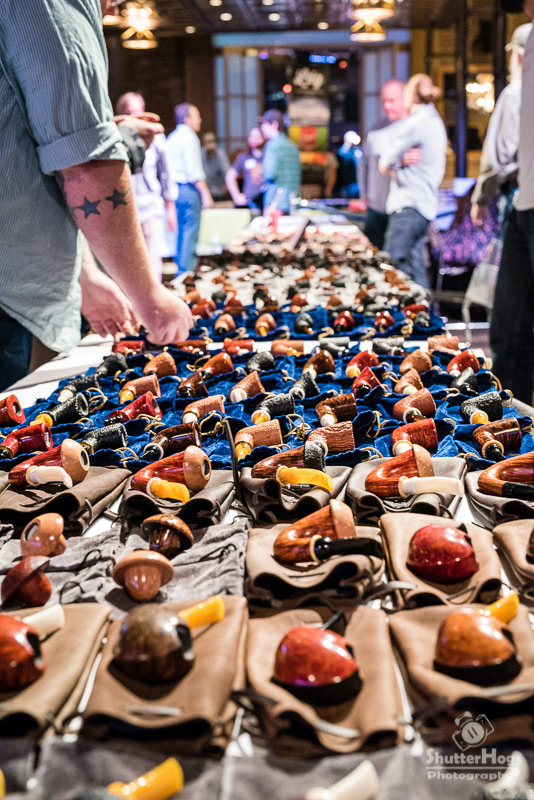 Thankfully, that was the extent of the drama for the show and everything else came off without a hitch for over 200 exhibitors and attendees that made the trek—well, except that the restaurant supplying lunch on Saturday burned down that morning, and again a last-minute replacement was enlisted. Aside from that, it was all good. The Hilton Garden Inn and Generations Hall were superbly accommodating, and the Perique factory tour, which will be detailed in another article, was an amazing experience and really built up anticipation for the show for those who were lucky enough to attend. 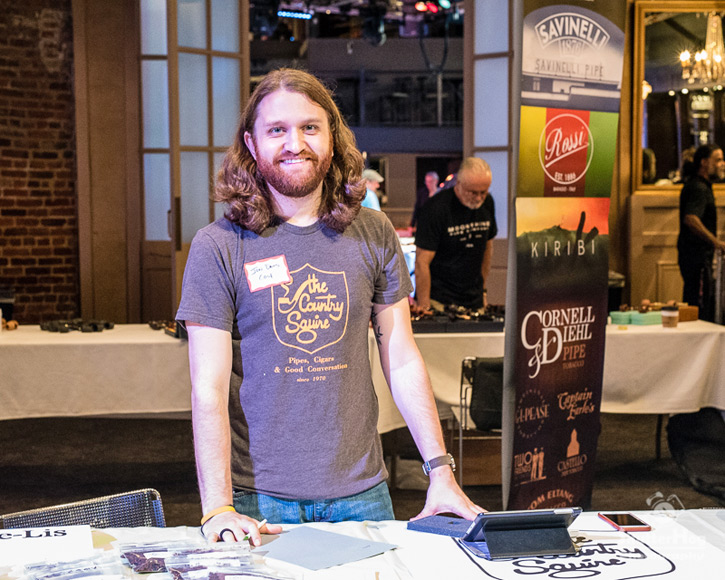 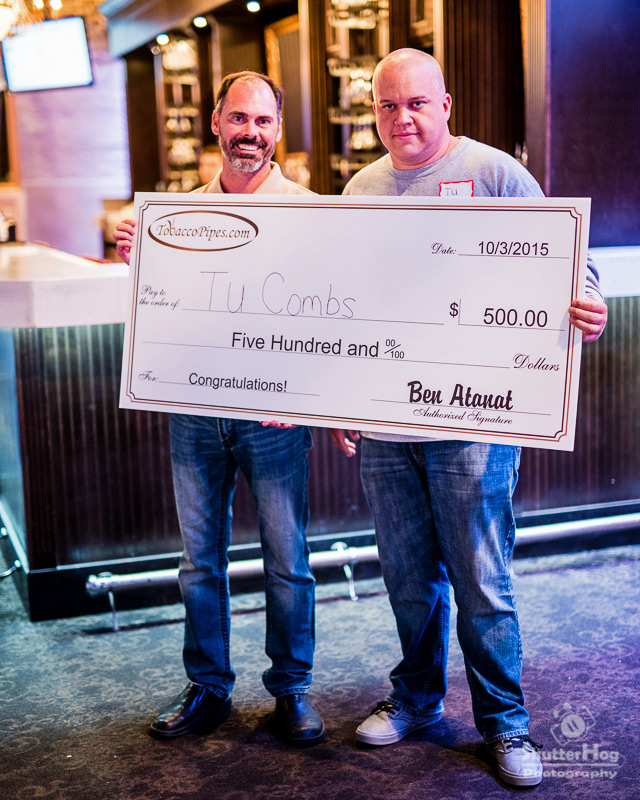 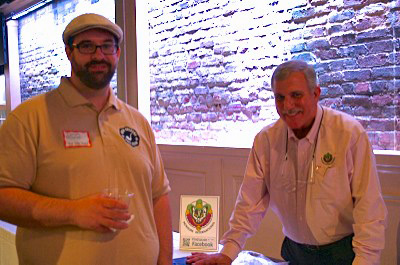 Sometimes you wanna go where everybody knows your name. With 65 exhibitor tables filled, the vendor turnout was exemplary for a first-time show. For the most part these are small businesses, and the expense of hauling one’s wares around the country for a chance at sales is a dicey proposition. Nearly everyone I spoke with did all right, and some exceptionally well. Steve Monjure, who sponsored the gift bags along with SmokingPipes, is my personal gauge on a show’s success—if he’s there, then it’s a success. He had a great time and looks forward to next year. Other familiar faces from the show circuit included Sally from The Pipe Tart (thepipetart.com), the SmokingPipes.com contingent with Chip and posse, the indefatigably opinionated Brian Levine, Scott Thile, Tom Dinelli representing the UPCA, Phil Morgan of Missouri Meerschaum, and of course Russ Ouellette. The single best thing about this (and any) pipe show is the personal contact with folks from our little corner of the industry, and being able to renew those friendships at the next show. 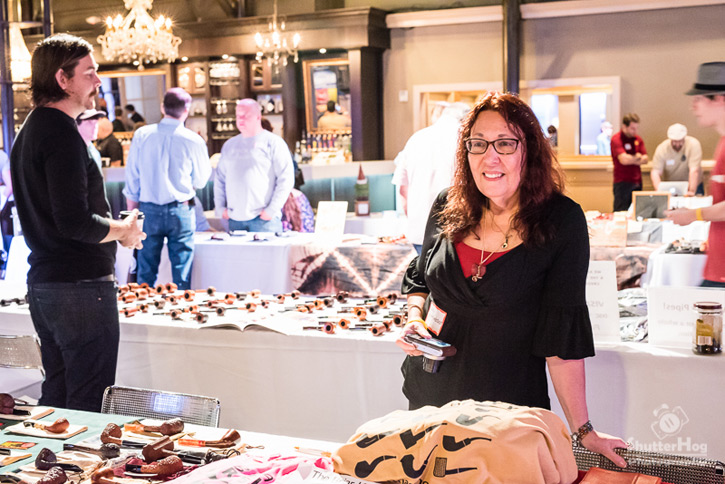 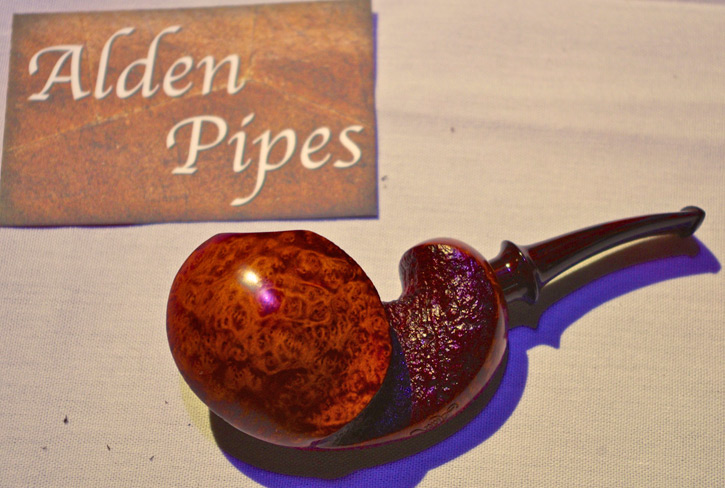 The one (of many) that got away. AldenPipes.com 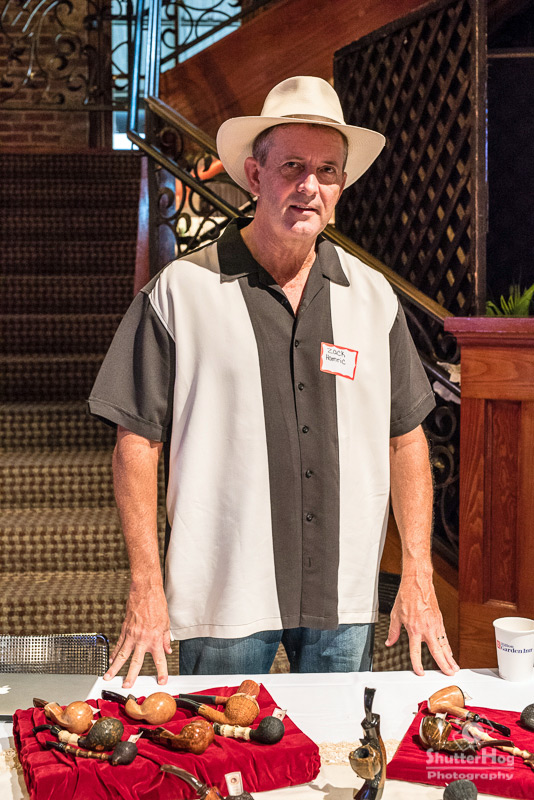 In the end, it’s all about the pipes (and tobacco). Some amazing carving talent was evidenced at the show, both from old standards and some new up-and-coming talent. The official NOLA show pipe, a robust billiard done in golden morta by Davorin Denovic, is still available at the time of writing. The crowd favorite in the carving contest was Tu Combs, and my personal favorite was Ryan Alden’s take on a blowfish that not only made me not hate the shape, it may very well have caused me to fall in love with it—if only I’d picked it up in time! Let that be a lesson: when you see something that you like at a show, BUY IT. Walt Cannoy debuted his new line of Cardinal House pipes, while father-and-son-in-law team NP Pipes debuted their wares for the first time ever. McClelland tobacco sponsored the pre-show slow-smoke contest on Friday night, and The Country Squire’s Jon David Cole was kind enough to formulate an official tobacco for the show, called Fleur de Lis, which will be available by request from the shop. 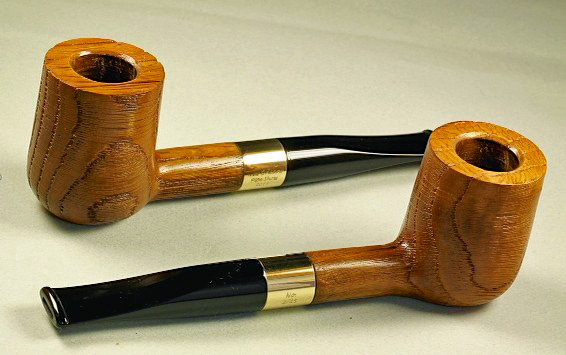 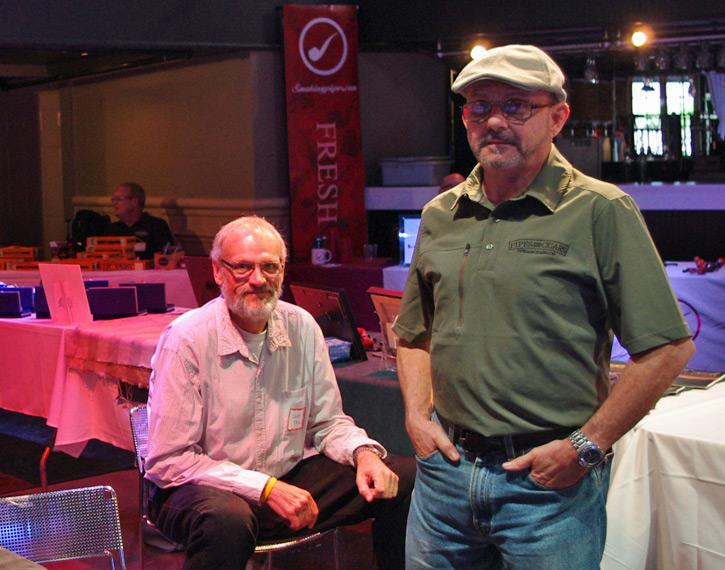 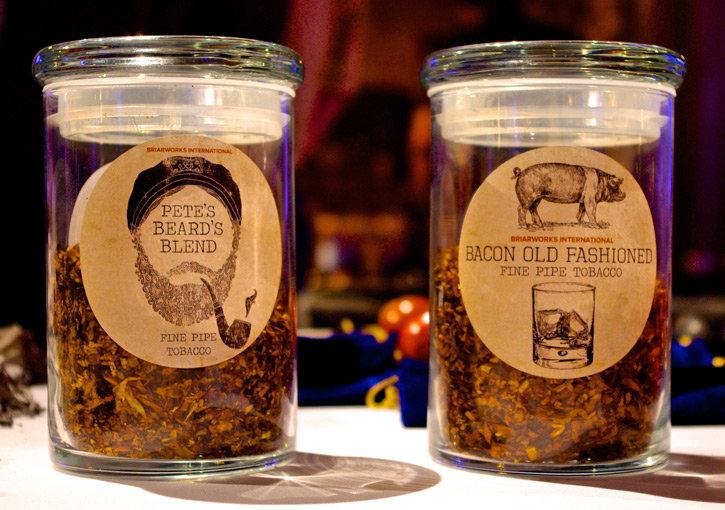 New Orleans food is as delicious as the less criminal forms of sin. —Mark Twain

What kind of show would it be without some product announcements? Topping the list is BriarWorks International’s upcoming blends that include bacon. No, not actual bacon; rather, they’re releasing a line of blends that includes a concoction with a decidedly bacon-y, bourbon-y flavor appropriately named Bacon Old Fashioned. It includes a goodly hunk of dark-fired leaf that lends that smoky character we all love, and visually mimics a pork rind. God bless ’em. Smoker’s Haven had a few limited-edition, numbered tins of a Syrian Latakia blend that I can only equate with absolute heaven in a tin, which debuted at the Chicago show. Russ Ouellette presented some soon-to-be-released blends for the Hearth & Home Signature Series, to be available in bulk only: Summer Harvest, a vanilla / caramel / fruity aromatic; Porch Swing, an American English with Perique; Delta Days, a VaPer including some choice mahogany burley; and Drawing Room, a Turkish blend featuring some superbly floral Oriental leaf. He’s also working with Mark Ryan to produce four blends that feature distinct variations of Perique, aimed at defining and illuminating the subtle differences available in this most wonderful of leafs. Many other projects that I can’t tell you about were discussed or hinted at, and for my money, that’s one of the most exciting things about hanging out with folks in the industry (and getting them drunk). 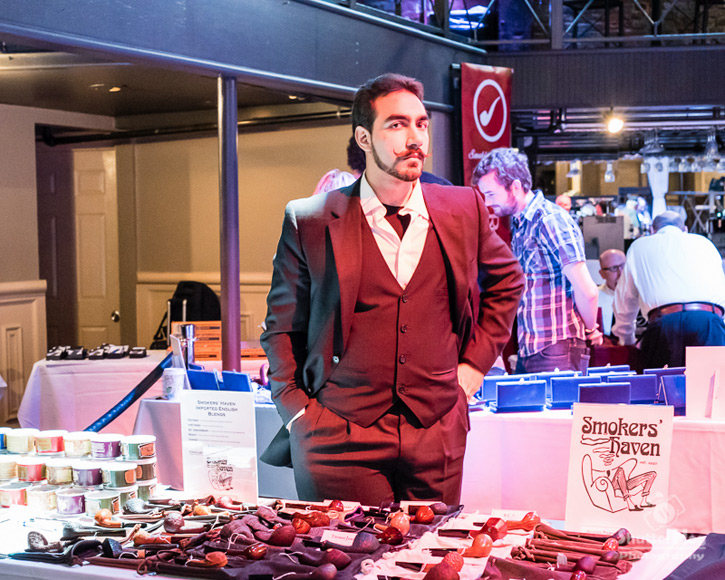 Yes, that’s a tin of Smoker’s Haven Syrian on the table. © ShutterHog Photography

The PipesMagazine.com community was well-represented at the show. It’s always good to put a real face behind the handles we get to know each other by. If you met an old forum friend for the first time at the show, give them a shout out in the comments section! In fact, forum member James ‘Pylorns’ Foster’s nascent cloud-based app, The Pipe Tool (thepipetool.com) was really how this whole party started, in a way, by involving him more in the piping community. Be sure to check out more web content available through countrysquireradio.com, and bookmark the show home page (nolapipeshow.com) in preparation for next year. Many thanks to Toby, James and Wes for organizing the show, extra special thanks to Wes Brown for providing the amazing photographs (shutterhogphotography.com) accompanying this article, and a resounding round of applause for the gracious show sponsors and enthusiastic attendees for making this weekend in the Big Easy one to remember. 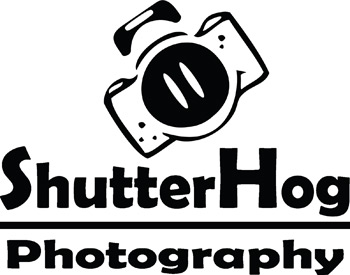