If you like to smoke pipes on a regular basis, or collect them, you should go to one of the preeminent pipe shows in the world, The Chicagoland Int’l Pipe & Tobacciana Show. The "Chicago Pipe Show" is not some little local exhibit where some Chicago guys buy & sell pipes in a little motel room.

It is a grand international event with over 350 exhibitors and nearly 4,000 attendees from 65 countries and most of the U.S.A. represented. According to Frank Burla, the show manager, one of the attendees last year came all the way from The Vatican. While we didn’t see The Pope this year, there were are attendees from countries such as England, Germany, Denmark, Belgium, The Netherlands, Sweden, Spain, France, Italy, Greece, Mexico, Japan and others.

Attendees include a broad spectrum of people with occupations such as lawyers, doctors, construction workers, chef, aircraft mechanic, electrician and bankers to name a few that I met.

The show, organized by the Chicagoland Pipe Collectors Club (CPCC), is in it’s 14th year. It is held at the Pheasant Run Resort and Spa Hotel in St. Charles, Illinois – about a 30 – 45 minute drive from Chicago O’Hare International Airport, depending on how fast you drive. (I made it there in 10 minutes … joking … maybe.)

Even though the official show days are Saturday and Sunday, the events of the show actually span one day short of a week. There is the Pre-Show (Wednesday to Friday), Main Show (Saturday & Sunday) and Post-Show (Monday). I arrived Thursday afternoon and departed Monday morning.

Aside from the joy of experiencing a giant group smoke with some of the nicest people in the world, you get to experience workshops, seminars and events such as:

– On Wednesday and Thursday Brian Ruthenberg conducted an all-day Pipe Making Seminar. Participants actually got to make their own pipes that they could smoke later during the show.

– There were also focused discussions for collectors on the history of Dunhill Pipes, Charatan Pipes, Limo & Champagne rides to the mall for the ladies, dinners on Friday & Saturday, a Golf Tournament with a Harley Davidson as the grand prize, seminars on collecting WDC pipes, Pipe Repair, Pipe Internet (eBay) Sales, a crafts session for the ladies and several other classes, events and sessions.

Craig Cobine, Show Treasurer, emphasized; "We try to have something for everyone and be as accommodating as possible to the entire pipe market. We have several educational seminars, we have opportunities for collectors to buy and sell, for smokers to try free samples of tobacco … and there is even a shopping outing and crafts session for the wives. Many retailers and pipe makers show and sell their latest offerings as well."

This was my first time there and I can certainly attest that all of the members of the CPCC were extremely nice and accommodating. They put a lot of hard work, organization and effort into the show. I would especially like to thank Craig Cobine for orientating me and checking up on me to make sure everything was fine. The title of "the hardest working man in show business" was given to James Brown, but if you included pipe shows, I think Frank Burla would win. There were back-to-back and overlapping events nearly round the clock during this show, from 6 am to midnight and Frank coordinated all of them. The guy is clearly older than I am, and I couldn’t keep up. I actually disappointed myself by missing Tad Gage’s evening seminar on tobacco blending because I fell asleep.

As of last year’s show, pipe smoking in the resort and "Mega Center" exhibit hall was banned because of Illinois’ "Public" Smoking Ban. Smoking was not allowed except in the 80+ smoking guest rooms and in a giant 6,000 square foot tent. The tent was nicely appointed however. There was a covered floor, plush couches, large cushioned chairs, coffee tables and large round tables to accommodate large groups for eating, playing cards and showing pipe collections. There was a full bar and hot food service provided in the heated tent as well. It was a pleasant 68 degrees Fahrenheit during the day, and a little cool in the upper 40’s at night. The Smoking Tent was opened 24 hours a day and used for most of those hours. You could show up any time of day or night and find a crowd to smoke with.

The first night in the tent I met Rick Newcombe, the author of "In Search of Pipe Dreams" and he graciously signed my copy of his book and introduced me to several pipe makers and pipe smokers. I’ve been told that pipe smokers are shy and introverted, but if they are, you sure couldn’t prove it by this show. There is an exceptionally strong camaraderie amongst the lovers of the briar. I also met Steven, a local Chef attending the show. He let me try his G.L Pease Maltese Falcon. When I told him how much I loved it, he gave me what was left in the tin. (I told him I liked his pipe a real lot too, but he didn’t give me that.) 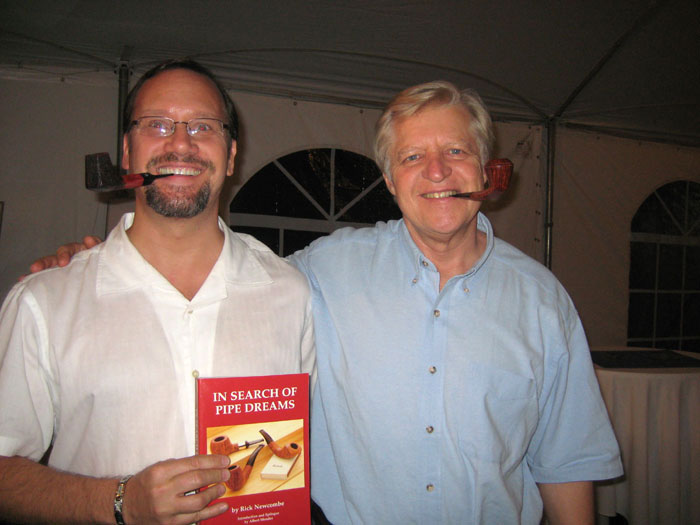 Kevin Godbee – Editor & Publisher of PipesMagazine.com and Rick Newcombe – Author of "In Search of Pipe Dreams"

The five days I was there went by much quicker than many trips I’ve taken, and I have taken some great trips – the Grand Canyon, Napa Valley, Las Vegas, Paris and many more – and I am not saying that The Chicagoland Int’l Pipe & Tobacciana Show tops these destinations, but many people do take vacation to come here. The "Chicago Pipe Show" is one of the most enjoyable shows I’ve been too. If you smoke or collect pipes and you haven’t been to this show, I suggest you start making plans for next year now.

Watch this space as we continue to report on the seminars, exhibits, and pipes and tobaccos that were at the show.