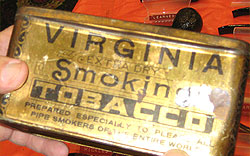 The 26th Annual CORPS Exposition & Celebration, or “The 2010 Richmond Pipe Show” as it’s commonly known, took place the first weekend of October; 1st, 2nd, &3rd 2010.
The Richmond show is one of the longest running pipe shows, and the second largest after the Chicago Pipe Show. The show attracts a semi-national crowd of pipe hobbyists, mostly from the along the entire east coast, the south and parts of the Midwest.
Pipe makers and sellers of new and collectible merchandise come from all over the US and internationally. One notable visitor that came all the way from Denmark was well-known pipe artisan Peter Heeschen.

I had the chance to visit Peter at his shop in Denmark over the summer with Sykes Wilford of SmokingPipes.com. He makes amazing pipes that are in super high demand for their excellent smoking quality and extreme beauty. You can peruse some Peter Heeschen Pipes here.
One of the great things about the Richmond Show is that it takes place in the “Tobacco Capital” and you can smoke inside the exhibit hall, at the Friday night dinner, and in the “smoking room” just outside the banquet rooms. The hotel, the Holiday Inn Select – Koger South Conference Center, has a limited number of smoking rooms as well. There is just something about Richmond that makes smoking your pipe all weekend seem even better and more enjoyable than usual. The weather in early-October is just wonderful. Last year there was a little chill in the air. The leaves were getting ready to start turning color. The beginning-of-Fall atmosphere, for some reason, just enhances the pipe smoking experience.
This year, Tropical Storm Nicole had us a little concerned. It swept up the East Coast in the days leading up to the show and caused floods in the Carolinas, Maryland, Virginia, and other Eastern states. There were travel advisories before and during the start of the show, but Nicole mostly left us alone and the show went on with all expected participants in attendance. However, disappointingly absent, through no fault of the weather was McClelland Tobacco and XYZ Distributors. It’s too bad these two major players couldn’t make the show this year.

Friday night, we had pre-dinner drinks and smokes in the “big smoking room”. It is like a big lobby / reception area on the side of the hotel where the conference and banquet rooms are. They set up portable bars with beer, wine and liquor. This is the area where lots of us gather each evening after dinner as well to smoke and chat into the late-night. For dinner, we were happily on theme with being in the South, gorging ourselves on barbequed pork, fried chicken, peach cobbler and many other regional delights. (I had grits every morning at breakfast too.)
Cornell & Diehl traditionally introduces new blends in Richmond, and this year was no different. We headed straight to the free C&D samples so we could smoke while we “worked”. C&D puts out freshly opened tins of probably 60 – 70 different blends that all are free to sample. I always find something that becomes a new favorite. Although not new, I discovered G.L. Pease Westminster, which is an excellent English blend. The new G.L. Pease blend is Meridian, which is the newest addition to the G.L. Pease Old London Series. The two new Cornell & Diehl blends are U.S.S. Mason and Montford Point Marine. They are the two newest additions to C&D’s series that pays tribute to U.S.A.’s African-American soldiers.

C&D hit it out of the park on these two new ones. I love them both. They are each completely different from each other.

I got a tiny little buzz from Montford Point Marine, but I am a lightweight. This one was developed personally by Craig Tarlar and has Dark-fired Burley, Perique and Latakia. It packs a punch.

U.S.S. Mason was developed by Chris Tarlar. Since this is a tribute to the sailors, it is topped off with a sprinkle of Brandy Cognac to deliver a Navy-style flavor. It is delicious and doesn’t bite at all. It tastes like the tin aroma too. It has Virginia’s, Burley and a touch of Latakia and Perique. I smoked them both right after one another in the last hours of the Richmond Show just relaxing in a chair and watching the crowds go by. It was a perfect end to the show. I give Montford Point Marine, and the U.S.S. Mason my highest recommendation. You can read more about new blends from C&D, along with a brief video interview with Chris Tarlar, in Bob’s detailed coverage here.


Jim Craig from Ashton Pipes traveled all the way from Essex England to show the latest pipes from the Ashton line. The origin of Ashton Pipes goes back to 1983 when Bill Ashton-Taylor started the company after gaining many years of experience at Dunhill. Like Dunhill, Ashton Pipes are oil-cured and handmade in England, and are very high-quality. It was just a little bit before the Richmond show last year that Bill Taylor passed away after succumbing to injuries from an automobile accident. Although he is sorely missed by many who knew him, Ashton Pipes continues to deliver handsomely designed, excellent quality pipes.
Ashton has a new line of “Chubby Pipes”, which are also commonly referred to as “Nose Warmers”. You can also see the new Paneled Sovereign in the first picture below.
MORE READING  Chicago Pipe Show 2010 Day 1 Update

There was also a classy Calabash and some very handsome Bulldogs.

Ashton Pipes can be purchased here.
Next we talked to Danish pipemaker Tonni Nielsen, who has pipe workshops in Denmark and Louisville, Kentucky.


Some of Tonni’s pipes are made in his workshop in Denmark, and some are made in his workshop in America, but these are all Danish pipes. They are all handmade pipes, made by Danish hands. Tonni has been making pipes for 43 years and he makes about 150 pipes a year, all of them handmade. The briar comes from the Mediterranean – Greece, Morocco and Italy and he hand-selects each individual briar block personally, traveling to the sources each summer. All of Tonni Nielsen’s pipes are Freehand shapes starting in price from $450 and up.
Here are some of the pipes Tonni Nielsen had on display at the show.

Tonni Nielsen’s Pipes Can Be Purchased Here.
Joe Nelson of Old Nellie Pipes was showing some extremely beautiful pipes. (He also crafts one of our other favorite wood products – custom-made guitars.) We talked to him about his pipes and guitars, and have a detailed interview with him here.
Here are some of the gorgeous Old Nellie pipes that were on display.

Old Nellie Pipes can be purchased at OldNelliepipes.com
Bob Gilbert of Denton, TX was showing several new pipes. He has been making hand-made one-of-a-kind pipes for 4-years now, and you can really see how he has grown in his craft. Here are some of the Gilbert Pipes that were for sale at the Richmond show. For more information on Bob Gilbert, click here.

Taking a break from looking at pipes, after the show on Saturday, we were quite pleased to take Linwood Hines recommendation for a restaurant that is an actual smoking establishment. Our Contributing Editor, Bob Tate and myself went to dinner with Vernon Vig and Mike “Doc” Garr.

Vernon is the President of both the New York Pipe Club and the United Pipe Clubs of America. Mike Garr is the President of the Pocono Intermountain Pipe Enthusiasts (PIPE) club, and Vice President of the United Pipe Clubs of America. Vernon is a total crack-up and Mike just has that calming college professor air about him. I had an excellent steak, martinis and greatly enjoyed smoking my pipe at the dinner table.
If you’re ever in the Richmond area and want some good food in a sports bar atmosphere where you can smoke, check out Bailey’s Pub & Grille.

Saturday night after dinner we relaxed in the big smoking room, smoked pipes, had some drinks and smoked past midnight. On Sunday we did a little video interview with pipe maker Bob Hayes, which you can see here.
After having busy days and nights on Friday and Saturday, we decided to slow our pace, chat and smoke on Sunday. Wrapping up our wonderful time in Richmond, here’s a few more highlights.
PipesMagazine.com contributor, and blender of the Hearth & Home tobaccos, Russ Ouellette was in attendance.


Jeff Gracik of J. Alan Pipes is always a pleasure to talk to. He is young, energetic, full of enthusiasm and makes pipes that will just make you drool. You have to check out the J. Alan Pipes for sale here.

John Seiler won the Best Collector’s Display for his Hawkbill Collection which included pipes from Rinaldo, Castello, Radice, Ser Jacopo and more. Here are some pictures of his award winning collection.

John also had the above antique pipe tobacco tin which seems to be from 1910.
We’ll end with pictures of a few of the members of PipesMagazine.com that we got to meet for the first time at the show.

You can see some more highlights from Friday night at the Richmond pipe show when we spent time in the SmokingPipes.com hospitality suite here.
The show is put on by the Conclave of Richmond Pipe Smokers club or C.O.R.P.S. and they did a great job. We can’t wait to go back next year, Sept 30 – Oct 2, 2011.
[mappress]