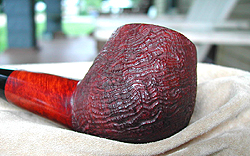 How would you like to make your own briar pipe?
Well that’s exactly what participants in the “Hands On” Pipe Making Seminar got to do at the Chicago Pipe Show at the Pheasant Run Resort in St. Charles IL. It seems like it would be a lot of hard work, and it is, but with the guidance of expert pipe makers, the participants turned out some impressive results.
Every year at the Chicago Pipe Show, during the early pre-show days on Wednesday & Thursday, there is a two-day seminar where registrants get to make their own pipes. The class is two full days from 9 – 5 and has a nominal registration fee of $75. Each participant is given a cut briar block ready for carving along with a stem.

The schedule was as follows (from the CPCC Website):
9AM TO 5PM DAILY Brian Ruthenberg/ “Hands On” Pipe Making Seminar
***Access only to pre-registered participants, Pipe Makers scheduled to participate in the seminar and the Show Staff. No others allowed in the area because of safety issues, security issues and because of disruption to class. There is a two-day agenda and it must be adhered to.
Information on the seminar:
Show Officer in charge is Rex Poggenpohl and the Instructors for the seminar are as follows: Brian Ruthenberg (lead instructor), Jaden from Hew-Len pipes and Alex Florov. Jeff Gracik and Rad Davis will be assisting/ teaching on Thursday, possibly Wednesday if they arrive at the show early enough.
Coming in on Thursday for some additional help and critics are: Tom Eltang, Peter Heeschen, Teddy Knudsen, Poul Ilsted, Manuela Riger-Krusk, Ed Jurkiewicz and possibly Michael Butera.

Report on the Chicago Pipe Show