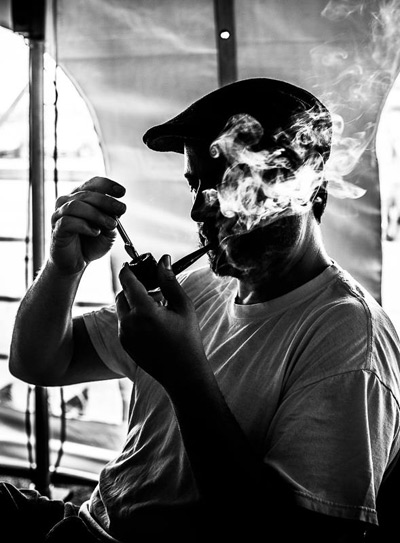 On Tuesday, I was so excited! My mind is racing … I am finally done with work and vacation starts tomorrow! The smoking tent opens at noon! All the events of the 2013 Chicago Pipe Show are going to start unfolding tomorrow! If I go to bed early, will it start sooner? Wait, that last statement is what my kids said on Christmas Eve, when they were much younger.

Everything was ready for my drive to St Charles. Beyond some pipes and other supplies, I also had almost a hundred tampers that I have turned. They were neatly packed in special containers, sitting next to the front door (true), and the shop is swept up and all tools placed in their assigned spot (not so true). Last year I sold several tampers during the Friday Swap and Smoke event. This year I had more tampers and some other items for sale. Based off of last year’s experience, I made changes to designs and hoped for better sales.

Wednesday finally arrived. I landed in St Charles to find that Main Street is under significant destruction. The four lane road was down to two and they moved back and forth, winding between the different areas being replaced. Illinois often tears up the old concrete, grinds it on site for material to make the new road. It was not just a ride, it was an adventure.
[Editor’s note: A slight slip of the wheel would land you in a four foot deep ditch for about a 1-mile stretch.]

On Wednesday there was a large cigar event, Big Burn, going on at the same location. They had another tent set up behind the smoking tent about twice as big. I won’t review this event, but will give two observations. Pipe smokers are probably more likely to sit quietly in a comfortable chair with a good book while smoking than cigar smokers. Also the women at the cigar event wear more interesting shoes. I was afraid for some of them that they would hurt themselves, if they fell off their shoes. Once the event stared, I was alone in the smoking tent, with my book. But the music was not my style and louder than could be ignored. Also a vendor was changing the smoking tent into a hookah lounge. I decided to go home before I could make observations on hookah customers. 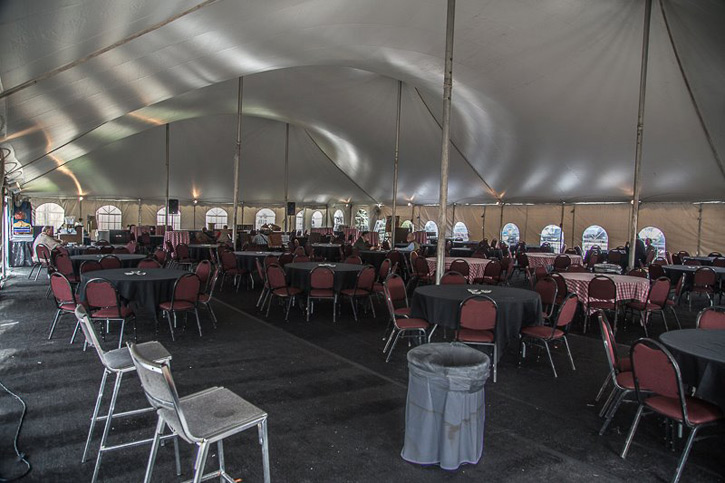 Thursday the Pipe Show really opened. When I arrived at the tent, there were several men sitting around one of the large round tables. Once I joined them, I realized the group included the representatives of two large tobacco firms and a popular pipe radio show host, along with some famous pipe makers. Due to forgetfulness, poor spelling, and lack of taking good notes, I will refrain from naming actual people in this article. Since I am still fairly new to pipes, I just sat back and soaked up the stories these guys told. Sometimes the conversation described drinking exploits, sometimes information about tobacco, and other topics like weather, previous shows, the Wednesday event, etc. I was rebuked for apologizing for being a nicotine light weight and preferring aromatic blends. This led to a fascinating discussion about the demographic studies that they have done on the pipe tobacco market. 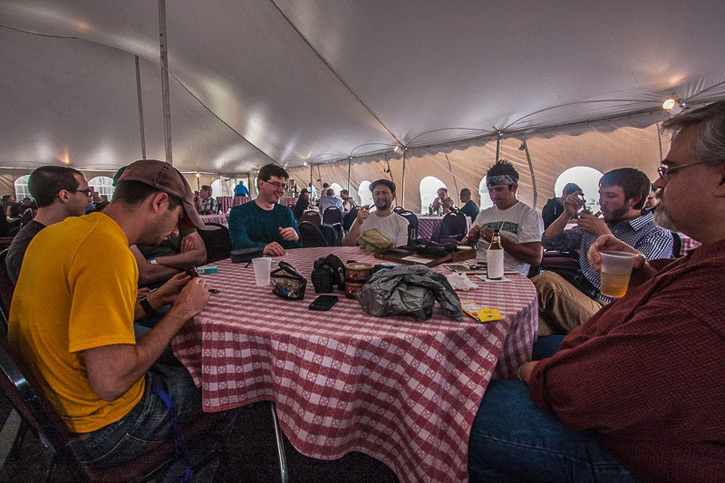 Then the fun started! The carvers started opening up their cases for pipes. Everyone wanted to see what the others had made recently. There was one pipe in particular that I admired. The top of the bowl was made of spalted morta. Afterwards, I saw someone pick up this pipe and tell the carver, "I want this one." I walked away before I found out the final price, but the buyer was still digging from his wallet after handing over five $100s.

As the evening progressed, I finally realized that the carvers were at the show for different reasons than I was. I offered to take several of them out for pizza, and they all declined. Last year, my sales on Friday set my budget for purchases on Saturday. This year, my sales would determine my tool / supply budget. Regardless, I was on vacation and wanted to spend time with friends. They were here on business. They needed to sell enough pipes to cover the cost of travel and other expenses. One carver said he purchased $500+ in briar that day. They needed to sell to get their pipes in the hands of collectors and users who would buy more in the future and spread their reputation. The pizza offer was nice, but it would not have been a wise use of their time at the show.

Finally, Friday morning arrived. Half the smoking tent was set up with eight rows of tables. I walked in, right as the vendors were allowed to choose a spot to sell. We each were allowed half a table. Some made the mistake of sleeping too long and could not find a spot until after someone else left. The couple to my left was selling very high-end pipes from the top name carvers. On my right was a professional carver and beyond him was a carver / turner. It is not possible to describe the range and variety of pipes on display during this shop and swap period. And the show on Saturday was even more impressive. 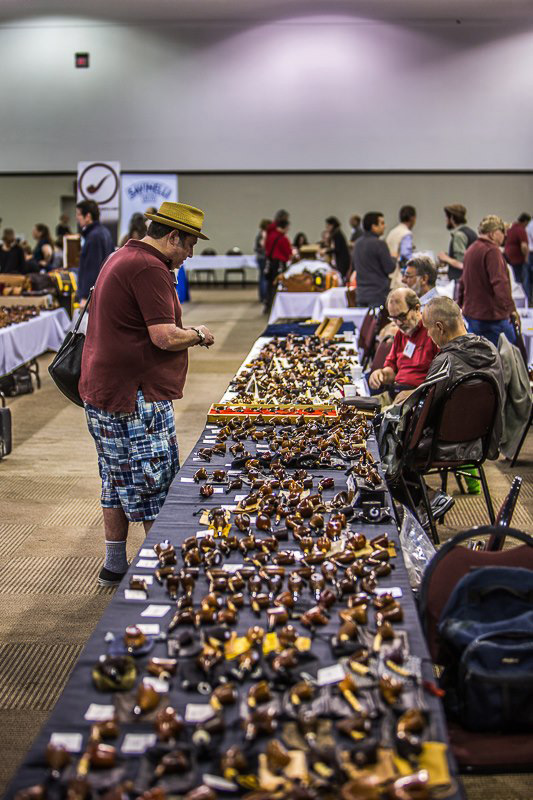 This year I made a huge pipe as a Purple Cow. This marketing term refers to something that grabs the customer’s attention and makes them stop and consider your product. The pipe was crudely made of Mulberry and about the size of a soup can. My Zippo could easily hide inside the bowl. I tried smoking it and found it impossible to light. But I consider it very successful, because many stopped at my table to talk about it. One man even took several pictures of it. While we discussed the pipe, I was often able to turn the conversation to tampers.

One of the huge benefits of being at the Pipe Show is getting expert advice. Another wood turner told me about some techniques I should try and some sources for new materials. My biggest sellers were tampers made from Corian, used in making countertops. A master carver picked up a pipe from the man to my right. After studying it, he said that this particular spot on the stem could be improved by a concave or convex surface, rather than a flat surface. Another customer said that many pipes cant to one side which appeals to right handed people, but as a lefty, he prefers pipes that cant to the other side. If a carver will listen to this free advice, then his future work will improve.

After every event, it is important to realistically evaluate what happened, to prepare for next time. I discussed the show on Saturday with several vendors. Most agreed that sales were down, but there was a lot of interest. During the next year, I plan on exploring new materials and techniques to improve my product. I also need to evaluate my market. Am I aiming for the higher end of the market or more mainstream? This decision will affect my pricing and production. What tools do I need to buy, in order to meet my quality and production goals? What skills do I need to acquire or improve? How much time will I need to invest? Every carver and craftsman at the show should be asking these questions. If you think we did good this year, wait until you see what we bring to St Charles next year! 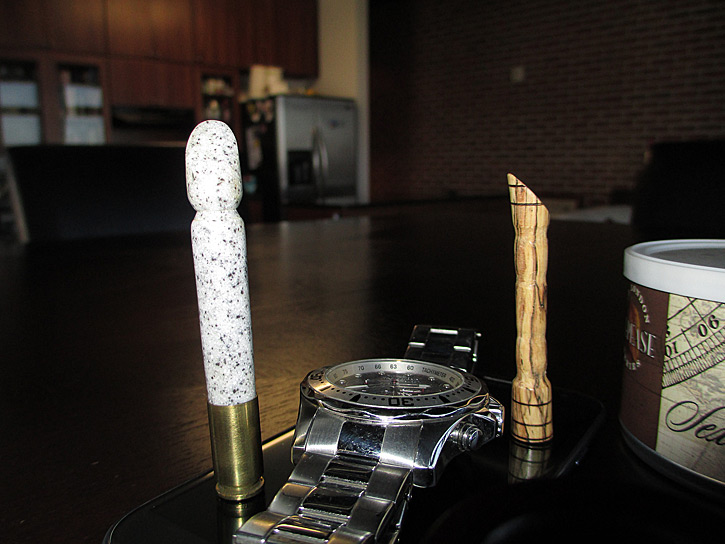 Corian Tamper on Left. Wooden Tamper on Right. Both made by John Winton and owned by Kevin Godbee.