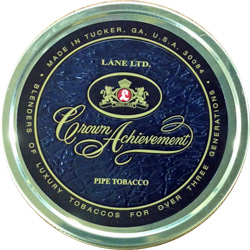 Leonard Wortzel, Brand Manager for Pipe and RYO tobaccos at Lane / STG was recently channeling his inner Sherlock Holmes. He decided to re-introduce the popular English tinned blend, Crown Achievement. It was a popular blend that had been discontinued for years. To paraphrase Sherlock Holmes, this was more than a three pipe problem – the tinning machine was no longer at the factory, and nobody knew where it was … and the recipe for the blend had been changed by R.J. Reynolds, the previous corporate owner of Lane Limited.

Several of our readers know that Mr. Wortzel is an active participant in the PipesMagazine.com Forums, posting under the screen name of “LeonardW”. Some of his participation has been to listen to the community’s requests to bring back some of their old discontinued Lane favorites. Some of the bulk blends that have returned in the past year include; HGL, Hazelenut, Black Raspberry, LL-7 and HG-2000.

The short story is that the tinning machine has been found along with the original recipe, and that Crown Achievement will be available in January, temporarily-exclusively through PipesAndCigars.com. Later, more of the old Lane tinned blends will return as as well.

The longer and much more interesting story goes like this.

Something that unfortunately happens on occasion in the pipe tobacco business is that a “Big Tobacco” cigarette company will buy a pipe tobacco manufacturer. The “cigarette guys” frequently don’t “get” pipe tobacco, let the accountants make the decisions, resulting in blends being discontinued and recipes being changed in the name of efficiency.

This is what happened to Crown Achievement. First, the recipe was changed, then, the blend was discontinued completely. The fact that the recipe had been changed was not even known when the decision to bring the blend back was made. Oh, and by the way … the original tin-art was nowhere to be found.

Where in the World is the Tinning Machine?

Leonard started asking around about the tinning machine that was no longer in the factory. The Lane tins are the flat, European-style tobacco tins, similar to the tins produced by their corporate parent, Scandinavian Tobacco Group. Lane Limited was the only American pipe tobacco manufacturer with a tinning machine like this, and they preferred to keep the new production in the USA. So the search for the tinning machine went on, but with little success.

Finally, Leonard thought to call on Frank Blews. Frank has been in the pipe and tobacco business his entire adult life, and is now retired, living in Florida. Frank’s past experience included working at Lane Limited, amongst several other pipe and tobacco companies.

Frank has lots of great stories, which are a joy and a pleasure to listen to, but the phone call was running long, and the suspense was killing Leonard. He finally had to interrupt and say; “Frank! Where’s the tinning machine!?!?” To which Frank replied, “Oh. We gave it to Nat Sherman a long time ago.” 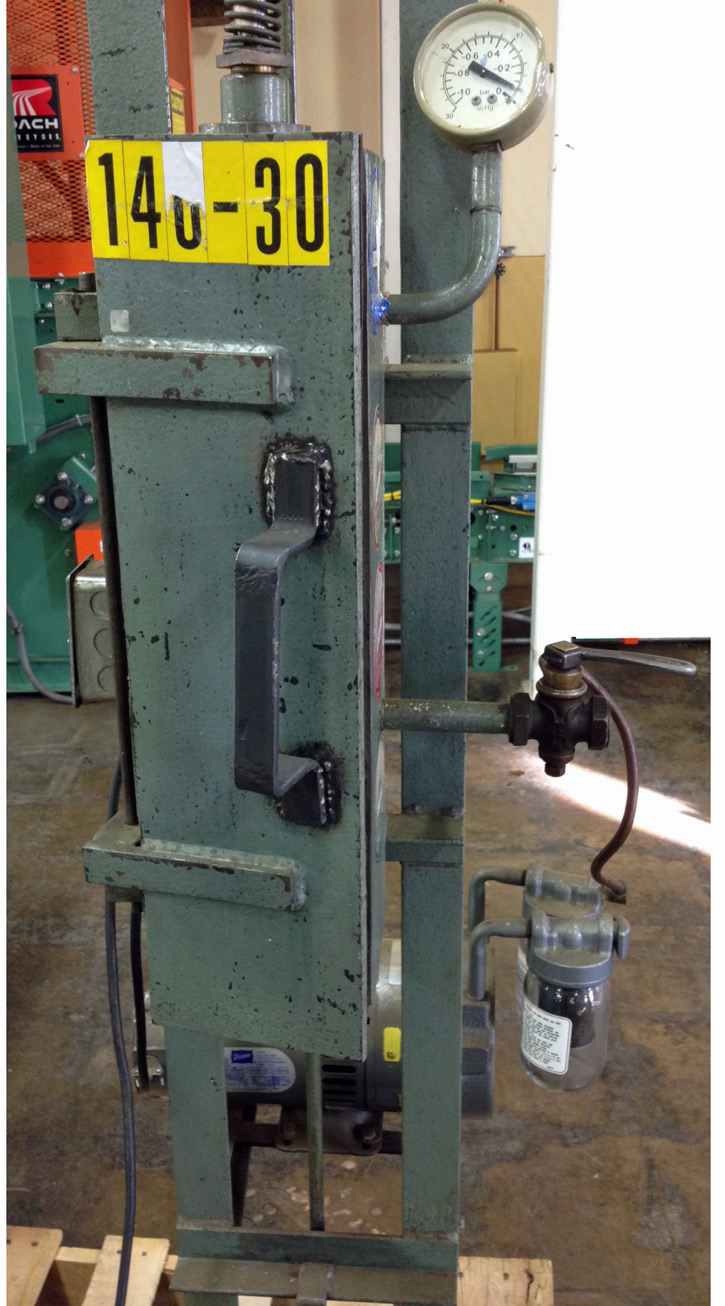 Nat Sherman, although located in New York City, has their tobacco production in North Carolina. They used to sell their pipe tobacco in tins, but it is currently only available in bulk, as the tins were discontinued. Since Nat Sherman stopped packaging tobacco in tins, the machine is useless to them now and has just been sitting unused. They were happy to return it to Lane’s factory in Tucker, Georgia. Leonard was finally having some luck with the project. To add to that luck, the same two employees that used to run the tinning machine still work at the Lane factory!

As previously mentioned, the original tin art for Crown Achievement no longer existed. Leonard had to purchase a vintage tin from a seller at the Columbus Pipe Show, and send it to his ad agency to re-create the graphics from scratch based on the old tin. 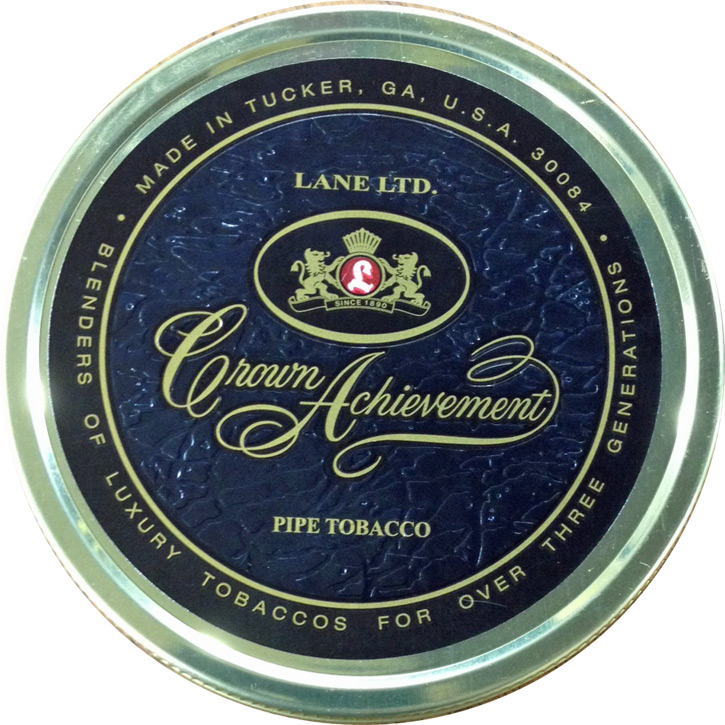 Now, with the tinning machine recovered and the artwork re-created, the factory started preparing a production run. Once again, lady luck was on their side when another long-time employee looked at the recipe and exclaimed; “That’s not the recipe for Crown Achievement!”

When Lane Limited was purchased by R.J. Reynolds, and the offices were moving from New York to Georgia, a couple of employees thought it would be a good idea to write down the blend recipes in a notebook for safe-keeping. 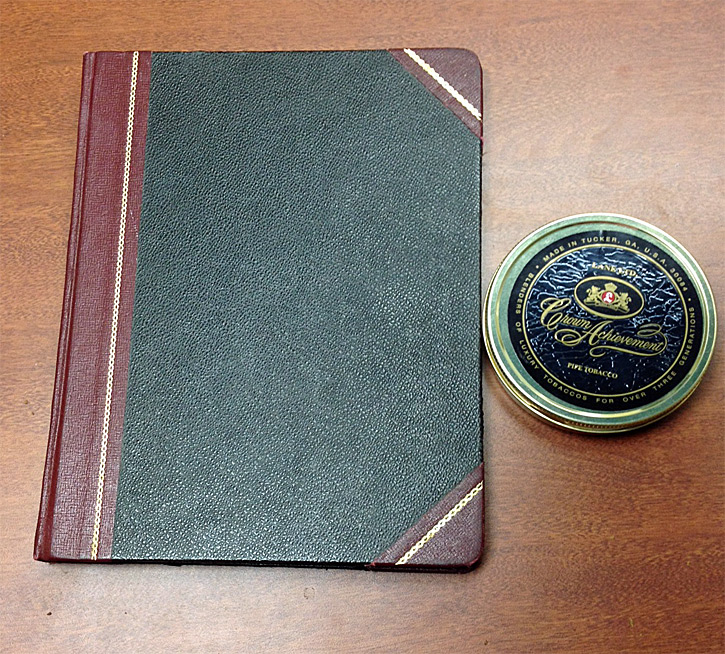 It turns out that R.J. Reynolds decided to change the recipe for cost-savings. They removed Perique tobacco and replaced it with Black Cavendish. Leonard thinks this was somewhere around the year 2006. 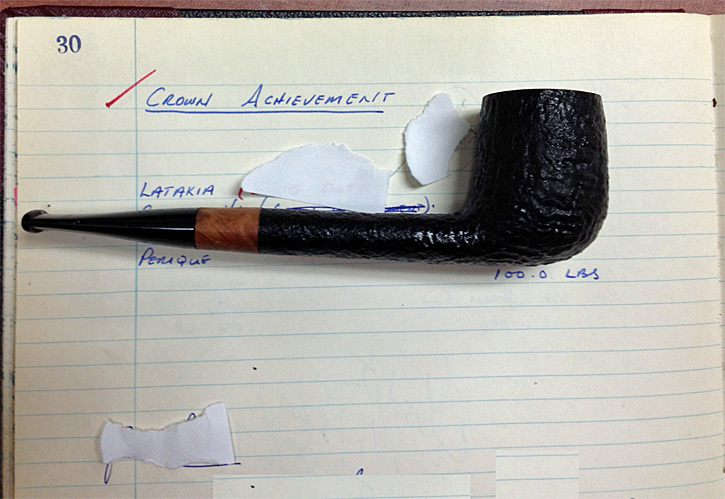 Crown Achievement will be available on or around January 15, 2014, initially with PipesAndCigars.com having an exclusive on the first production run. Later, other retailers will have it as well.

There are plans to re-introduce other Lane tinned tobaccos in the future. 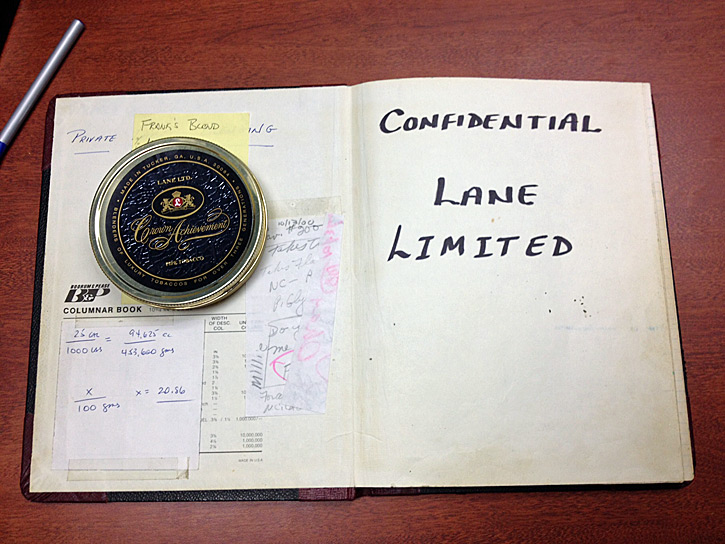