Did You Know There was an International Holiday for Pipe Smokers? 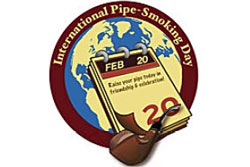 Referred to as IPSD for short, the "holiday" is not exactly new, but in terms of other holidays’ age, it is one of the youngest, coming into its’ 5th annual celebration on February 20, 2012.

Speaking of age and youth, an interesting trend has been reported in recent years by several local media, and most notably by The Wall Street Journal in 2009. The article, "The Latest Thing They’re Smoking in Pipes on College Campuses: Tobacco" was published to coincide with the 2nd annual International Pipe Smoking Day on February 20, 2009. The article spoke about how young adults at colleges and elsewhere were once again picking up the pipe, thus bucking the stereotype of pipe smoking being an "old man’s pastime". In the fashion world, they often say; "What’s old is new again", and that certainly seemed the case on college campuses in 2009 for pipe smoking.

You may be wondering; was this just a passing fad, or has it stuck? There is much anecdotal evidence that the trend has continued with even more young adults throwing the "pipe smoking is for geezers" cliché right out the window. You can read more about the current growth of pipe smoking in "This Isn’t Your Grandfather’s Pipe".

Based on the perceived growth of the "pipe hobby" as it is often referred to by today’s enthusiasts, it seemed like the time was right for an international holiday for pipe smokers back in 2009, and it looks like it’s even more appropriate now.

Many of today’s modern devotees of the pipe are more akin to a wine connoisseur than the pipe smokers of old. If your grandfather, or great-grandfather smoked a pipe, he most likely had one or two pipes, and smoked one or two brands of tobacco that he purchased at a drug store. He probably never polished his pipe and rarely cleaned it. When it wore out, he threw it away and bought a new one.

If modern pipe smokers are to wine connoisseurs, then old-school pipe smokers would be more like Budweiser Beer drinkers. Granted, there are still pipe smokers that follow the old no-frills method of pipe smoking, but today, many people are more than just a "pipe smoker".

Today, the contemporary pipe aficionado is involved in the "pipe hobby" and is a member of the "pipe community", or the "brotherhood of the briar". He (or she occasionally) may also be a collector of pipes, just as serious and devoted as any other type of collector.

Some people have 50, to 100, to several hundred pipes. Many also have large "tobacco cellars" just like a wine fanatic might have a wine cellar. They store and note the date of different vintages of tobaccos. They may have and smoke over 50 different brands, styles and blends of tobaccos. Many of these tobaccos are produced by small boutique blenders in small batches, by hand.

Pipe hobbyists go to pipe shows hosted by pipe clubs around the country and around the world. Several pipe shows in the United States are even attended by overseas visitors. New and estate (what we call previously owned) pipes are bought, sold and traded. There are pipe smoking contests to see who make make a bowl last the longest before it goes out.

Pipes are painstakingly cleaned and polished. Tobaccos reviews are published, just like wine reviews. Active online communities and forums are getting busier and busier, as are local clubs that meet in person.

There may still not be as many pipe smokers as there were during the booms of the ’50s and ’70s, but in a world where little growth can be found anywhere in the last three years, pipe connoisseurs have countered the trend and realized growth in their small corner of the world.

Now, specialty tobacconists, pipe & cigar lounges, and pipe clubs all over the world are getting ready to hold special events and parties to mark the 5th Annual International Pipe Smoking Day. Retail tobacconists are inviting all of their pipe smoking customers to celebrate at their stores, some are having special sales along with beverages and Hors d’oeuvres.

Since February 20th falls on a Monday this year, some stores are holding weekend-long events and sales.

International Pipe Smoking Day was originated by Smokers Forums.co.uk. February 20th is the day their forums were launched several years ago. Since then, IPSD has been supported by the Comite International des Pipe Clubs and its members in 25 countries around the world. The United Pipe Clubs of America is the United States member of CIPC.

The UPCA website explains that, "On this day we will … celebrate the noble art of pipe-smoking and the … spirit which pervades the brotherhood and sisterhood of the briar. We will put into practice the time-honored and ancestral traditions of raising our pipes in unison to toast each other and share a bowl together."

Attesting to the resurgence in pipe smoking among younger adults as well as older ones, pipe smoking groups have attracted thousands of members in recent years on social networking sites like Facebook, Twitter and especially on PipesMagazine.com.

Mark your calendars now for February 20, 2012, and check with your favorite retail tobacconist if they are celebrating with International Pipe Smoking Day. If not, tell them they should as it’s a great opportunity to invite people into their store.