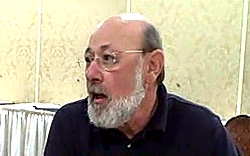 On the last day of the West Coast Pipe Show, as things were starting to wind down, we were finally able to corner Marty Pulvers, one of the show’s organizers. Marty has a long history in the pipe business. For nearly 20 years, he owned and operated the retail shop Sherlock’s Haven, in San Francisco’s financial district. His store was given the honor of being named one of the ’10 Best Tobacco Shops In The World’ by Forbes Magazine online. He closed his store in June of 2006 and now operates an online store selling both new & estate pipes. Here is Cynthia Sargent’s 7-minute interview with Marty talking about what the West Coast Pipe Show offers to the world of pipe smokers and collectors.