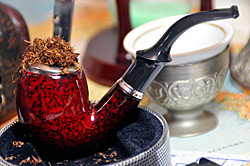 As I sit down with this month’s questions, I’m enjoying a wonderful bowl in little sandblasted apple made by one of my favorite makers. While this normally shouldn’t be worthy of mention, really, in this case it is. When I got this pipe in trade from another collector, it hadn’t been smoked more than a few times, and the first bowl gave me a profound sense of why he’d chosen to part with it so quickly. Its smoke was harsh, acrid, in a word, dreadful, and very much unlike other pipes I’ve had from this maker. No wonder it hadn’t made the cut for my friend; when there are so many truly great pipes to be enjoyed, why suffer a bad one? But, charmed by its shape, its size, its balance, its nicely detailed blast, I wasn’t going to be so quick to part with it, resolving, instead, to give it a sporting chance. Choosing a forgiving blend, I vowed to give it a full tin before passing final judgment. I’m glad I did.

It took quite a few bowls before things started to go right, but then, one day, it seemed to turn a corner. The harshness subsided, the bitter, acrid taste disappeared, and it began to deliver a sweet, flavorful smoke. After a few more bowls, the pipe has become a favorite. It’s not the first time this has happened, nor, I’m sure, will it be the last.

I’m not always this tolerant with a stubborn pipe, and if I hadn’t liked so many things about this one, it would have quickly found itself on the block, but something kept me at it, and that rare patience turned out well rewarded. I recall the counsel of one of my early pipe mentors who told me, when I was struggling with a pipe that exhibited a similar tendency towards evil intentions, "Just smoke the hell out of it." I haven’t always heeded his words, neither has the approach always worked when I’ve tried it, but in this case, hell has indeed been smoked out, and replaced by heaven. Thanks, Eric. Sometimes, I do remember.

Colin asks: I’m a relatively new pipe smoker, and am confused about something. Some people have told me it’s best to leave a pipe cleaner in the shank before putting in the rack, that it will wick up extra moisture as the pipe cools. Others insist that it’s essential that air circulate through the shank to keep the pipe from getting stale or something like that. Both of these make sense on the surface, so what’s the right answer?

A: Sometimes, it seems like every aspect of pipe smoking can be discussed and debated until the sun burns out, and this is one of those things. I’ve done it both ways, and can’t claim with any authority that one is better than the other. I will confess that, for a while, out of laziness (I called it being too busy, at the time), I’d stopped cleaning my pipes as thoroughly as I had in the past. I’d just run a couple pipe cleaners into the thing, and stick it back in the rack. The result of this cavalier approach was that, ultimately, I ended up with some very sour smokers in need of a much deeper cleaning with alcohol, shank brushes, elbow grease, and plenty of time. This was a messy affair, and after spending more than a couple hours and a few bundles of B.J. Long fluffy cleaners on the task, I decided to revisit my old cleaning routine, perhaps making some improvements along the way. Here’s what I do, now.

Once the smoke is finished, I’ll run a couple cleaners through the shank to get out most of the moisture, and leave a clean one in place until the pipe has cooled, sometimes until the next day. This final cleaner does appear to wick a little extra moisture, evidenced by the fact that it often emerges from the stem darker than the previous ones had. I’ll then remove the stem, and clean the shank with a couple or three folded over cleaners, scrubbing at it a bit, until they emerge relatively clean. It’s sometimes surprising how much tar can remain behind after that first swabbing. This whole process usually takes only five or six cleaners, and leaves the shank clean and sweet, ready for the next bowl.

It takes a little time, but this little maintenance ritual is serving well, preventing, or at least prolonging the need to do deeper cleaning. A clean pipe is a happy pipe, and mine are tasting better for this small effort, and I’m doing my part to keep the pipe cleaner manufacturers in business.

Michael sips from his cup and writes: I am a big tea drinker and since I live in the colder climate of the Northwest and have to smoke outside. I have been drinking tea with my pipe because its nice too have a hand warmer. Recently I have been experimenting with the different flavors I taste between drinking just plain hot water, luke or room temperature water and cold water. I have just started too keep a smoking journal on this just as a fun experiment. I know temperature will effect flavors such as in scotch, bourbon and some foods. My question is have you ever experimented with this yourself? Could drinking cold liquid vs. a hot liquid have an effect on the tastes of a tobacco? I would like too get your input on this little experiment.

A: There’s likely a bit more here than meets the teapot, and I think it’s well worth your exploration. The temperature of a beverage has a bearing on our perception of it for a variety of reasons. Hotter beverages will produce more volatile aroma components that we perceive as flavor (a combination of taste and smell) directly via the nose, as well as through something called retro-nasal olfaction. When we have something in our mouths, its aromatic elements are delivered to our smell sense through a passage connecting the throat to the nose. Warmth may also activate the taste receptors more effectively, increasing the effective sensory input.

Hotter beverages may also tend to more effectively "dissolve" the lingering aftertaste of the tobaccos being smoked, freshening the palate for the next puff, and their warm vapor may help to prevent olfactory fatigue of the tobacco—the temporary inability to distinguish aromas after prolonged exposure. On the other hand, cooler drinks may freshen and cool the palate in a different way. And, of course, moisture in the mouth is a good thing for enhancing taste, as anyone who has ever smoked with "dry-mouth" can attest.

In my experience, teas are particularly good palate cleansers. I suspect their acidity has something to do with this, in addition to the other factors already mentioned. Water may not be as effective. In any event, you’re on your way to some interesting findings, and I hope you’ll come back to share them when you’ve drawn some conclusions. We’ll keep the light on for you. 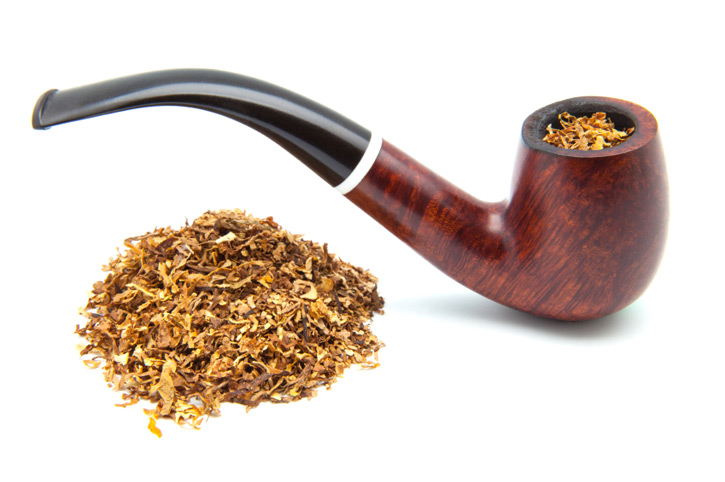 Robert wants to know: In Ask G.L. Pease, Volume 32, what is the make of the calabash-shaped pipe that is shown leaning against what looks like a silver tobacco jar, in front of a rack of pipes? Many thanks.

A: That’s actually an Ask Kevin question, since he does all the publication stuff. If he’s paying attention, maybe he can answer it here. (Wake up, Kevin.)[Editor’s Note: The pipe in question is an Aldo Velani Briar Full Bent Calabash.]

Jesse writes: I miss Raven’s Wing. That’s all, no question. My father mourns Balkan Sobronie 759. I lament the passing of Raven’s Wing. If I had a time machine, that warehouse would be one of my stops (fire extinguisher in hand).

A: You and me both, Jesse. The one I miss most is Renaissance, but Raven’s Wing, Mephisto and Bohemian Scandal are still missed by a lot of folks ten years after the fact. Let’s see if we can recruit Mr. Peabody and his Wayback machine to give us a hand, here.

From Steve: I have been wondering about moisture content in tobacco, and the seasoning of briar through repeated smoking. I smoke a lot of British-made flakes and find that if I smoke them in a fairly new pipe I need to dry them to get a good flavour. However, in a well seasoned briar I can smoke them straight from the tin – with excellent results! What could be going on here?

A: A good observation, and a great question. This has more to do with the development of the cake in the well-smoked briar than it does with the additional seasoning of the wood itself, though that seasoning certainly has a bearing on the flavor development of the pipe. The layer of carbon can be quite adsorbent, clinging to excess moisture like a ShamWow, so excess moisture in the tobacco gets trapped before it gets to you. Of course, this is also why a well-seasoned pipe performs better after a good rest, giving that cake ample opportunity to dry out again. A new pipe is relatively more tolerant to repeated smoking, but once that cake begins to form. letting the pipe dry will help to ensure sweet smokes.

That’s it for this month. As always, keep those cards and letters coming, and we love comments, so share your thoughts below.
-glp