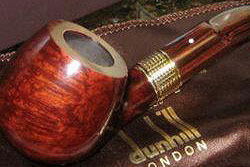 Dr. Tobacco, resplendent in his perfectly pressed white lab coat, log-log-decitrig slide rule and antique pocket protector, yellowed from years of smoke-filled rooms, and stuffed with medium point Biros and pipe cleaners, has returned to his underground lair to explore new and exciting things to do with the his newly patented Smokinator, tanks full of highly classified rocket fuel and small rodents, so it’ll just be me, back at the keys for issue number 17. He does send his regards, however, and wants his readers to be assured that any resemblance to Dr. Heinz Doofenshcmirtz is purely coincidental. (Where’s Perry?)

Franz writes: Recently I bought myself a vacuum machine for home use. I want to experiment with a couple of things. 1) To preserve tobacco by evacuating the air completely 2) To let tobacco age, by letting a tiny rest of air in the pockets and cellar it. I can for example open a tin to let the mixture inside breath a bit and then close it again and evacuate the air to a considerable extent (but what would be considerable?) 3.) Experimenting with homemade blends – so for example to let ferment a mixture under vacuum or maybe better with some residual air (don’t know what would be better). Also for example to produce a kind of cake through the pressure inside the vacuum pocket.
What do you think about all this. I was telling some people of this idea and they were arguing that the evacuation could take flavour from tobaccos or that it could produce putridity (fouling).
A: Where to start? First, even if you have access to high-vacuum commercial sealers, you’re going to be leaving quite a bit of air in the bag. Typically, a high quality sealer will get the pressure down to about 35 Torr (1 atm is 760 Torr), so the bag will contain more air than an incandescent light bulb. But, that’s actually not a bad thing. Fermentation and the “aging” process begins aerobically, and there are also oxidation products that seem to be important to flavour and aroma. A friend of mine, some years ago, experimented with different packaging over a three year period, and concluded (as have I in similar experiments) that vacuum sealing is not ideal for long-term aging and storage. Minimal real aging takes place, and the membranes used for the typical food-grade bags are permeable to moisture, so even though the seal remains intact, the tobacco can eventually dry out.
The idea of using a vacuum seal to slow further aging of a tobacco that’s been opened may not be too far off the mark, but it’s not going to fully arrest further changes. Freezing the vacuum-sealed bags would further slow things down, but I’m not quite sure why anyone would want to do this. That said, it’s certainly not going to result in putrefaction.
As for using the vacuum sealer to create a cake, again, the pressures involved aren’t sufficient. Cake tobaccos are put under a pressure of several tonnes per square cm, and you’re not going to get close to that with the sealer. You’d be better off building a rudimentary press, and parking your car on it. If you search the web, in fact, I think you’ll find that others have made presses using different techniques, and have reported some good results! Whatever you do, experiment and have fun with it. You may make a wonderful new discovery. 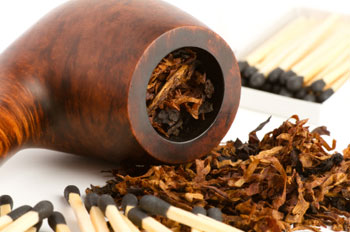 Tony queries: Of course there’s always somebody asking questions about using matches as opposed to lighters and the fact that some things ignite the pipe tobacco at a lower temperature. Ok, matches win that one hands down and butane lighters, while not as nasty as a torch which in my opinion has no good use in a pipesters paraphernalia, ignite a bit hotter. My question is, “what is your take on Zippo pipe lighters; the ones with the hole in the side of it so that it pretty much hits the center of the tobacco in the bowl? Does it ignite hotter or is it just that one has to accept the taste of the fuel momentarily?
A: I like matches for a variety of reasons. Yes, the temperature is significantly lower than that of a butane lighter, but more importantly, it’s possible to use them with greater care and control. When lighting tobacco, a delicate flame is a must for improved flavour and decreased harshness. Teasing the flame over the surface with very gentle puffing is the best way to heat the leaf, and coax the pipe to almost light itself, as one would do with a fine cigar.
The biggest problem I have with Zippo-type lighters is the taste of the fuel, which taints the tobacco, and to me, that taint remains throughout the bowl. Whether or not this matters is, I suspect, largely a matter of personal taste, but for me, it’s just not worth it. I don’t use lighter fuel in my BBQ, either.
Besides, we’re pipe smokers. We need to cling tenaciously to our traditional, anachronistic ways, and these new-fangled gimcracks have no more place in our kits than velcro-fastened spats or clip-on bow ties. Matches rule.
Hunter asks: I’ve read that blends such as the original Barking Dog and others like it are today referred to as “American-English” types. In your estimation what is the proper definition of an “American-English” pipe-tobacco?
A: As far as I can tell, most people use this designation to refer to blends that contain some percentage of Latakia and oriental tobaccos as an adjunct to the more typical American-type burley blends, often containing an aromatic component like vanilla or maple. Some refer to this style as “Aromatic English,” or “Crossover English” mixtures. It’s one of those terms, like “Balkan” that has different connotations depending on who you ask. There’s no codified definition, so context will have to be your guide.
A few have written questions to the effect of: I’ve read a lot lately about “tin baking,” the cooking of tobaccos in the tin. I’m curious about it. What’s the story?
Stoving in the tin is certainly nothing new. I first learned the technique when I spent all my free time at Drucquers in the early 1980s. We had an electric pizza oven specifically for the task, and several of the blends were treated this way. It’s also a process I’ve used with several of my own blends since 1998, including some that are Latakia-rich. It certainly does interesting things to the finished product.
Some consider it an “accelerated aging,” but it’s not that. What it is is a rapid integration of the volatiles—a more complete and quicker “marrying” of the components. It can dramatically change the overall balance of a blend, sometimes for the better, sometimes, not so much. It will, in any event, alter the direction the blend will take in future aging, so beware if you plan on playing with tobacco you plan to continue aging. 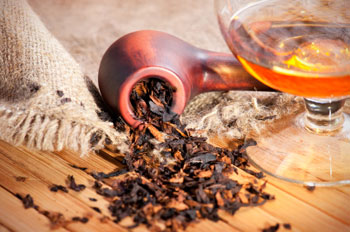 But, it’s one of those things that’s fun to experiment with, and a few swear by their results. I recommend proceeding with caution, perhaps jarring some small quantities and toasting them for various lengths of time to see what you get. With virginias, I find that letting them sit, sealed, for a couple weeks after any heat is applied is definitely beneficial, as they can sometimes take on an unpleasant aroma and taste for a while when freshly cooked. And, be sure not to let the temperatures get much above 190-200˚F, or you may end up with a smelly mess to clean up when the container bursts, spraying the oven with an shower of tobacco.
Blackhorse wanna know: I used to live in Southeast Alaska (Ketchikan) and during my 8 years there (which only seemed like 200) was a fan of NPR…public radio. This was circa 1985. At that time one of the bits NPR used to run along with Prairie Home Companion was a thing called “Ask MISTER Science”…as a free standing thing maybe 5 minutes long. The tag line was, “I have a Master’s Degree…in SCIENCE!”. This must have been the forerunner of the Duck’s Breath offering you mentioned, as they seemed to have graduated him to PhD status. I guess it just goes to show that in a world where all the kids are above average and they’re willing to leave the light on for ya…even hammy radio shows can hope to finally earn their doctorate. Life is good, especially if you’re willing to wait for it. Which brings me to my question. I’m a knife maker, courtesy of my retirement, and love to use them to cut plug tobacco…my favored form. I love JackKnife, among and above other plugs such as Warrior, Honor Blend, etc. Are there any plans for future GLP plugs to which we can look forward?
A: Your memory is good, but there’s more to the story. The bit, produced by Duck’s Breath from the beginning, and originally known as Ask Mr. Science, first aired on San Francisco’s KQED in 1982, and was later broadcast on many public radio stations across North America. Some years later, Mr. Science (Dan Coffey) received a letter form an inventor who claimed a trademark on the term “Mister Science,” so he granted himself an honorary doctorate, becoming Dr. Science. The spot concluded with the disclaimer that Dr. Science “is not a real doctor,” and declaration from his sidekick, Rodney (Merle Kessler), “Remember. He knows more than you. He has a Master’s Degree … in SCIENCE!” It was always an irreverent spoof on silly science questions, and opinions were apparently quite polarized; people either loved the bit, or hated it. I’m betting you can guess which side of my crumpet is buttered. Mister or Doctor, he still knows more than you.


As regards a future plug for GLP, I think you just made one, albeit a bit sideways, and more than likely unintentionally, and GLP thanks you very much. GLP needs all the plugs he can get. (The back of his scalp is beginning to look sadly in need of a few plugs, as well. Probably has something to do with all the head-scratching he has to do to answer these questions.)
So, that’s it for this edition. Keep those cards and letters coming. My membership to the Hair Club for Men is counting on you.
SUBMIT QUESTIONS HERE
Post Views: 897