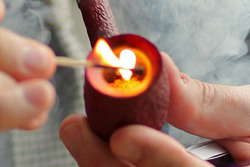 The holiday season is now in full swing. Thanksgiving is behind us, at least on this side of the puddle, my inbox is being polluted with a daily deluge of “Black Friday,” which apparently now lasts a fortnight (I wish I could extend time so effortlessly), and “Cyber Monday,” which I predict will extend well into the new year. Increasingly, I find this level of invasive commercialism sufficiently irritating that I consider leaving for an extended holiday on some tropical island whilst the turkey is still frozen in its plastic wrapping, and not returning until some time in January, when the chaos lessens, and life, and traffic, returns to its more normal state.

But, this year I’m here, and as winter continues its tentative entrance, and my fickle tastes follow their usual cold weather fashion of craving fuller latakia mixtures, I’m ever more grateful for the too rare moments of disconnected solitude, relaxing with a warm briar and a good book, ignoring the frantic, loud reminders that today is my last chance to save big on things I have no intention of buying, from stores I have no intention of visiting.

The pipe is a fine companion on the best of days, but its when it offers respite from the day’s dramas that it seems to soothe the soul the most. We are a fortunate coterie. We have at our fingertips something truly special that the uninitiated can never comprehend; a source of pleasure and delight, a vehicle for momentary escape into another world, a timeless place of reflection and fellowship, where past and present intermingle and dance in the clouds, where differences dissolve, and we can share, however distantly, in a ritual of fire and earth that our ancestors enjoyed, and, hopefully, that our children will carry forward.

When the pressures of the season become too much to take, grab a favored tobacco, a cherished pipe, and celebrate. The pipe’s magic often makes things bearable again.

I’ve got mine stoked and smouldering. Time for this month’s questions.

Dylan asks: I’m having trouble keeping latakia blends lit. I’ve tried Kensington, Chelsea Morning, and Sextant, and all of them seem to go out every 5-10 minutes no matter what I do. I’ve tried letting them dry out, rubbing them out, letting the tobacco set after lighting, and combinations of all three. Blends with latakia are the only blends that present this difficulty. I’ve smoked and enjoyed Union Square, Filmore, and Jackknife plug, and had no problems keeping them lit usually 1-3 relights. Is there anything you can suggest that would help me keep these blends from going out so frequently?

A: Generally, when people have trouble with a tobacco not staying lit, it’s the result of packing it too tightly. Oriental tobaccos, and especially latakia, do not burn as easily as virginia and burley varieties, and can sometimes be a little finicky. The usual advice is that they should be packed somewhat less tightly, and I’ve always found that to be true. I’m assuming you’ve had similar problems with other mixtures as well, but as mine are not cased with sugars or treated with chemicals to keep them “fresh,” coincidentally helping them burn, they can sometimes be a little more sensitive to packing pressure. Once you get it sorted, this is actually a good thing.

I find tobaccos very rich with latakia, like Westminster and Abingdon, challenging to keep lit on those occasions, more frequent than I’m proud to admit, when I pack them with too little attention, but I haven’t experienced the difficulty you mention with Chelsea Morning or Sextant. So, try packing with a somewhat lighter touch, and see if things aren’t set right for you.

Jeff wonders about perique: I’ve noticed that the flavor profile of Perique seems to fall into two categories – spicy/peppery and dried/dark fruit – depending on the blend it is present in. I’ve tried to reverse engineer this by examining the other varietals present in each blend, the percentage of Perique used, and even moisture content, but the particular reason for this dichotomy still eludes me.

What are the variable(s) that cause either of these two flavors to predominate? I’m aware that not all tobacco bearing the name is actually processed in St. James Parish, and I wonder if that may have something to do with it? 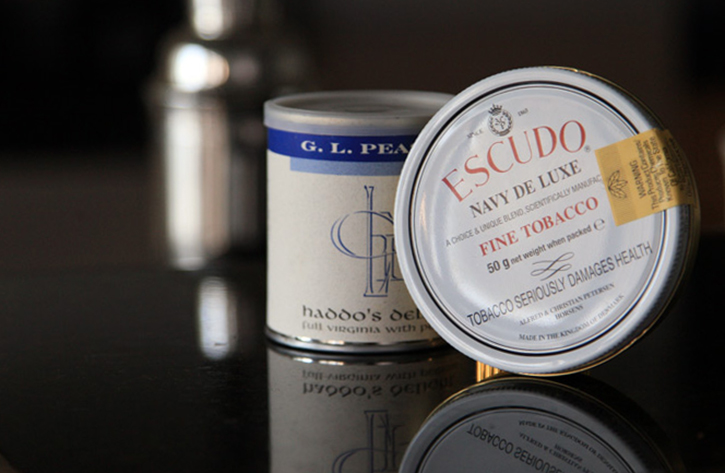 A: Perique is a wonderful and somewhat mysterious substance. Your guess is that the other components in the blend have a strong influence on the way perique presents itself is spot on, but the amount of perique present also can make a significant difference to the overall experience. Think about it in culinary terms. A pinch of salt in a dish can enhance the flavours, stimulating the palate to perceive nuances more readily. Add still more, and the salt itself becomes noticeable. Still more, and the dish becomes salty. The same thing can be said for some of the warm spices, like cinnamon, which can go from sweet to pungent with only a small change in the dosage.

Perique performs similar parlour tricks. A little bit tends to enhance the characteristics of other tobaccos present, smoothing out the rough edges, and amplifying the sweeter, fruitier notes without calling attention to itself. A bit more, and its essence begins to shine through the cracks in the curtain. More still, and it will make quite an entrance. All the while, the other tobaccos in the mix will shape the overall effect.

Add to this the fact that “virginias” vary widely, and you’ll recognize how the complexity of things like this can grow. A lovely high-sugar, relatively low-nicotine bright from the Carolinas will offer something very different from a dark African or Indian flue-cured variety, which tend to be higher in nitrogenous compounds (including nicotine), and are generally perceived as “spicier,” or a Brazilian leaf that might be considered “earthy.” These tobaccos will interact with perique in ways to either intensify or subdue some of these characteristics, again, depending on proportions in the mix.

MORE READING  Ask G.L. Pease! He Knows More Than You Do!

Finally, the perique itself can possess slightly different characteristics, depending on the crop, the processing, the way it’s handled after it comes out of the barrels. With something like a virginia tobacco, different crops can be combined to produce a relatively consistent product from harvest to harvest. Perique is different. Each vintage may express itself differently, in the same way that wines do, and and each farm’s leaf may offer something a little different from that of its neighbors due to the influence of microclimates and terroir. Because perique is a boutique product, it cannot be easily homogenized in the same way that virginias can. Fortunately, our producers are delivering perique of exceptional quality, and the leaf that we, and most others use, is exquisite, and has proved to be quite consistent. I realize I’ve not offered a definitive answer, but that’s the nature of this thing we call “tobacco blending.” There are rarely easy answers to difficult puzzles like this, and anyone claiming otherwise is either trying to fool you, or themselves. 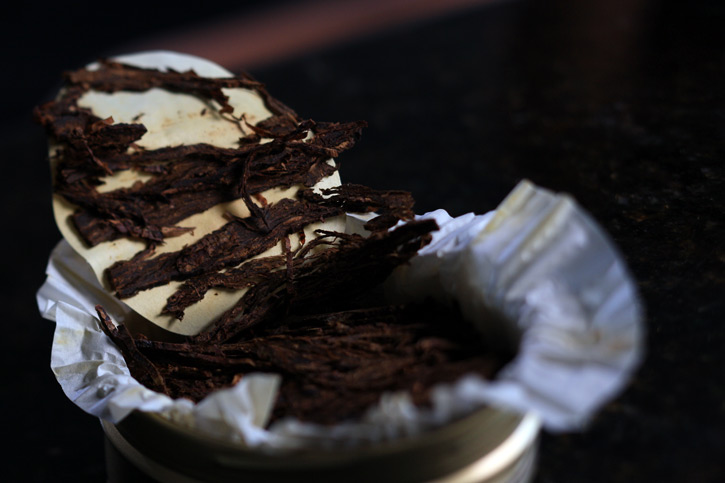 A: There will certainly be some difference over the long term, but even with 40% of the air evacuated from the tin, there’s still plenty of oxygen present to fuel the microbes that sail through the tobacco leaving wonderful byproducts in their wakes. One of the results of their metabolic processes is the production of CO2, which in a sealed environment will ultimately cause their own doom. This is when anaerobic microbes start to do their thing. In a vacuum-sealed tin, this second stage of aging will likely start sooner. Is this good or bad? That’s hard to say. Much depends on the blend itself, the storage conditions, and so on.

One thing I, and others, have observed is that using those vacuum bag contraptions that can turn the contents of a tin of ribbon-cut leaf into a little tobacco brick is not ideal for long-term aging. These take out too much air, and the process never seems to gain traction, or is at least radically slowed. The same tobacco tinned at atmospheric pressure and sealed in an evacuated storage bag over a several year period will result in a very different product. Personally, I prefer tobaccos to be stored in un-evacuated tins for long term storage, but others seem to like getting rid of some of the air.

Tim asks the most important question in all of pipedom: What kind of pipe does Santa Claus smoke? I know it seems early in the year but by the time this is published it will practically be December. So you are all knowing and seeing about all things pipes, what does he smoke? I assume you have met him at pipe shows or at least communed with him through your articles etc. And don’t try to sell us on one of your toady nosewarmers – his beard would catch fire. Thanks and Merry Christmas!

P.S. While you’re at it, you should let your readers know what kind of pipe Frosty smokes too.

A: The second question is easy, Tim, so I’ll answer it first. All we have to do is consult Frosty’s theme song for the answer. “With a corncob pipe and a button nose, and two eyes made out of coal…” Clearly, Frosty smokes a Missouri Meerschaum, specially treated to withstand the temperature extremes of life in the snow, of course. One thing is certain: Frosty has damn good reason to worry about his pipe smoking hot; a little inconvenient tongue bite for us would be a catastrophic melt-down for him. I suspect he’s got his technique very well practiced.

Santa’s pipe is a bit more problematic to pin down, as he’s smoked a great variety of them over the years. He smoked clays for a time, having adopted the custom in the 17th century, but has over the past hundred years or so, adapted well to the briar, and more recently he can sometimes be found smoking modern, hand-made pieces, as well the occasional figural meerschaum, intricately carved with scenes of reindeer and sugarplums. I suspect these pipes are usually gifts from pipe makers seeking his favour after a year of their being naughty. One thing is fairly certain. Santa does not likely smoke a Bo Nordh when he’s ringing his bell relentlessly outside the big box store, pandering for a few coins to be tossed into the cauldron. Then again, thanks to the draconian smoking ordinances in most places these days, he’s not likely smoking anything in those cases, unless he and his cauldron are at least 25 feet from the doorway.

That’s it for this month. May your pipes bring you happiness and the warmth that will help you to stay cool during the holiday rush. And, as always, keep the questions coming.
-glp