About three months ago, I picked up this Servi meerschaum with the lions head in a claw. http://pipesmagazine.com/forums/topic/new-lion-in-claw-meer I've been asked a few times for an update on the coloring. I had planned to post more photos tonight. Then Carolinachurchwarden posted photos of one his with coloring. I thought I'd wait. He insisted.... so here it is :mrgreen.
There's a lot going on with this pipe, as far as the carving, and I'm guessing that has a lot to do with how it's been coloring. I had a conversation with Chasingembers some time ago, when it first began coloring (and it began coloring quite quite quickly) about where on the pipe it began coloring first. I noticed it seemed to be coloring first in the lions snout, not the shank, and the front 2/3 of the lions mane and the ears. Then the underside and the talons. And then the front portion of the shank. I assumed the rest of the shank, the thicker portion closest the stem would begin to catch up. The smooth oval with Servi's name began coloring before rest of that portion. Very interesting to me, as I assumed originally it would begin to color at the rear of the shank and then move forward and then the bowl would begin to slowly meet it.
This thing seems to defy the norm.
Much of the coloring was within the first month, smoking it at least once a day for about three weeks. After that, I've smoked it a bit here and there, sometimes a couple times a day, and sometimes a few times a week. And then I left it alone for at least 3 weeks. And then I picked it up for a smoke again last night.... and again tonight. I really love this pipe.
I'll post a couple photos of it when new, and follow up with photos I just took tonight. Prepare to be mindblown :mrgreen:
New, virgin, snow white meer...

And the coloring process so far... 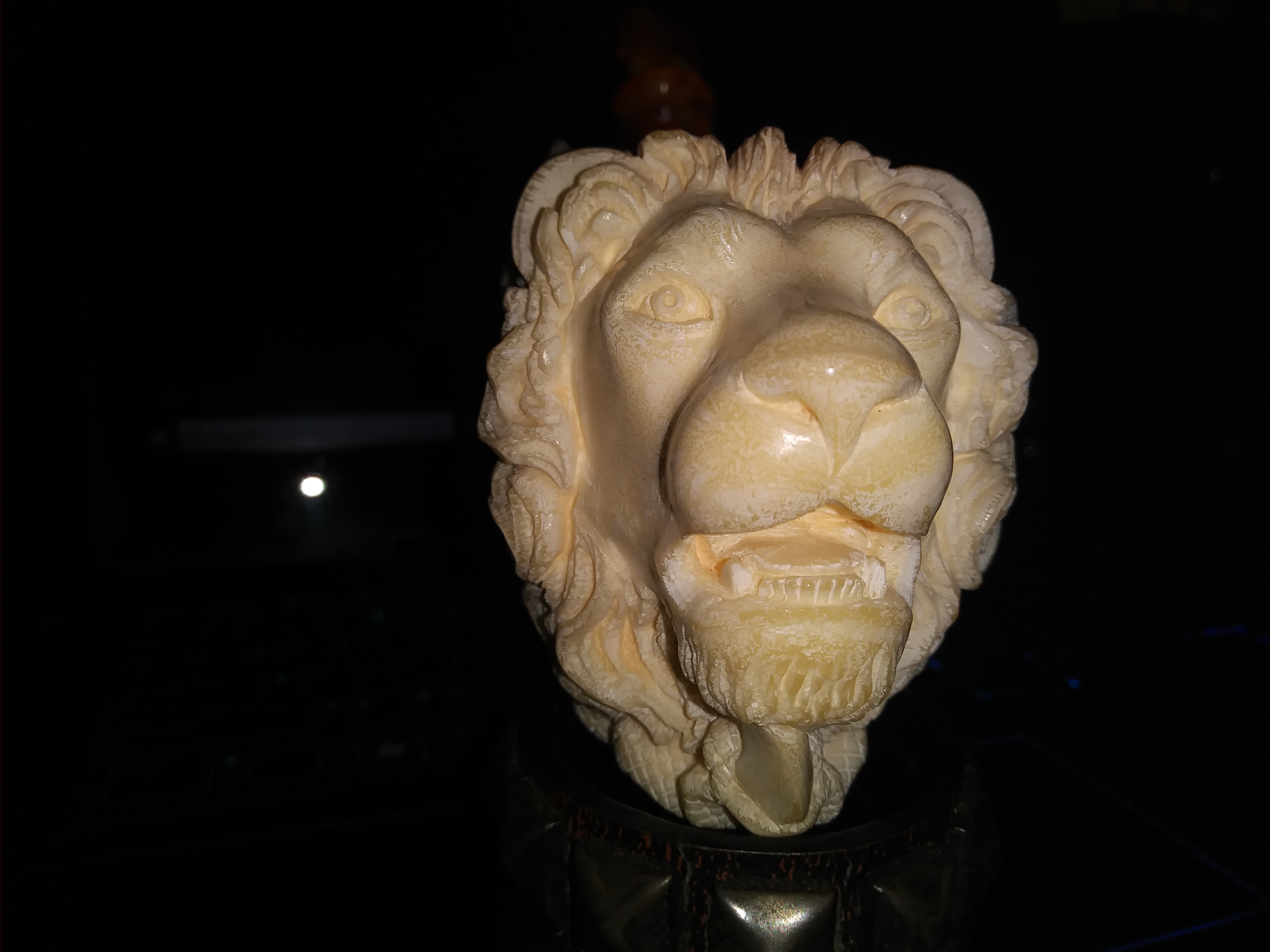 It is currently being smoked with a new blend only me and Chasingembers knows about.... because I don't want all you scallywags buying up all my supply :nana:

Oh man, she looks great!
It really is hard to fathom how far the coloring reaches to make it out to the surface. Yours has to travel a lot farther to the surface than mine does, yet it's picking up about the same amount of color. I also like how, like mine, it's getting this yellowish color to it first, before it'll pick up the tan and start moving on to the brown. Just absolutely gorgeous. Still love that carving, mate!

Thank you. :D
Thanks, Carolina. It's been a blast watching this thing color. I always look at it before every smoke, and again after every smoke after immediately buffing with a microfiber cloth. I'm almost certain I notice the change with each smoke. Whether that's all in my mind or not, it's certainly fun watching it change. :D

Very nice.
What does buffing it with a microfiber cloth do?

Very nice.
What does buffing it with a microfiber cloth do?
Click to expand...

Strong work on the coloring, Anthony. That is badge of honor. It only gets better.

I have a meer, never smoked it. Maybe I'll break it out.
Actually, I have another, Strambach, gurgles like hell. It seems to gurgle at the stem connection. I hope I don't have those issues with my other one.

Mine gurgles on occasion there too, but when it does, a couple taps toward the front will usually drop it down into the bowl so it can soak into the meer.

Actually, I have another, Strambach, gurgles like hell. It seems to gurgle at the stem connection. I hope I don't have those issues with my other one.
Click to expand...

Any time I get gurgle with any pipe, I just put a pipe cleaner down the stem. It soaks it right up. It doesn't happen often with me, but I always keep a few cleaners on hand just in case.

Very nice progress. I like watching how the details start to pip as they color. I got that heavy coloring on my claw by a lot of nightly smoking during the Summer over a few years.

As before, I absolutely adore that lion face, and the whole pipe. It's coloring amazingly, already getting that mottled appearance in the face.

As before, I absolutely adore that lion face, and the whole pipe. It's coloring amazingly, already getting that mottled appearance in the face.
Click to expand...

The carver did a fantastic job of capturing a lion in this. I've seen few as well done. I'm absolutely loving this pipe. It's been my main smoker again for the better part of this week, and I'll probably keep it up for another week or two before I pay attention to some of my other pipes :rofl: