Good afternoon guys,
Thought I would ask you for your help defining the pipes used between 1550ad and 1625ad. I am also wondering about the tobaccos they smoked in this time period.
Thanks for your help
John

What country? And, while really none of my biz, why do you ask?

European,I play with a Medieval group and would like to have a pipe during the day.
John

Here's a discussion on the subject from several years ago.
http://pipesmagazine.com/forums/topic/the-oldest-available-pipe-tobacco-blend

Id probably guess a Clay Pipe or a hand carved reed stem pipe but with out knowing what country/region and actor i.e. pesant, Nobleman, Knight..etc...

@pagan in the group I am a minor noble. As for region would be England/Ireland.
John

I would recommend something like this clay pipe, seeing how tobacco was fairly new in that period the lower class probly would not have tobacco avilable to them, and if they did it would likely e smoked in a hand carved wooden pipe with reed stem, also a link to a site were you can get one cheap and an interesting article on Pipedia, hope this helps

Ah, then you'd be smoking peat in a clay pipe..... Sorry, just being lightheaded. I would guess a clay would be right, but no idea what was even available in the UK in 16th-17th C.
Edit: Apparently Virginia our Eastern state, provided tobacco to England, according to the link pagan supplies above. So, a Virginia tobacco (most of which is grown now in Africa, (!) should do nicely.
You can rub ash all over the clay pipe to make it look like it didn't just come out of the shop....

This image is from 1595, supposed to be the earliest image of a European smoking a pipe. 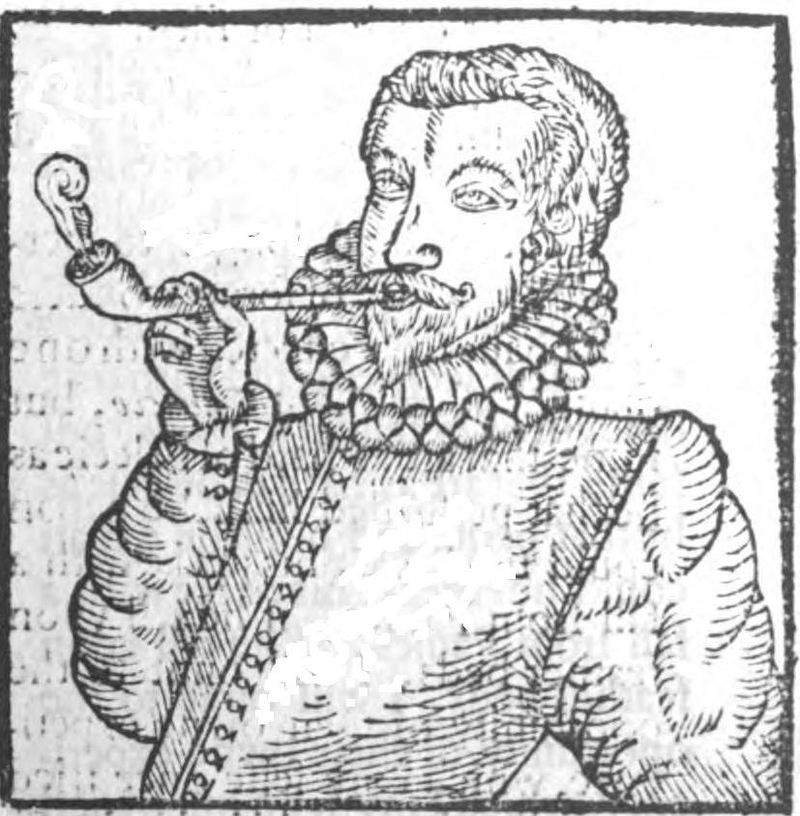 I read somewhere that the early Portuguese and Spanish explorers brought back tobacco and calumet pipes (not sure what those actually looked like in the 16th century, but they'd probably look kind of odd paired with a late medieval costume).
Here's Sir Walter Raleigh's pipe c. 1617:
http://tobaccopipeartistory.blogspot.com/2013/03/sir-walter-raleighs-pipe.htm
Raleigh was English, but he spent plenty of time in Ireland, so that works geographically.
Here's an odd looking pipe found at Jamestown:
http://www.cbsnews.com/news/400-year-old-tobacco-pipes-found-at-jamestown/
And here's probably what would be the more typical Elizabethan-era pipe:
http://www.historywiz.com/exhibits/james-johnrolfe.htm

Tobacco from Virginia was the first introduced to Europe so the blend of choice for your role play I would recommend getting some straight Virginia blending tobacco
http://www.pipesandcigars.com/pipe-tobacco/112875/lane-virginia/

Here's a 16th-century image of a Dutchman smoking a pipe with what appears to be a twist of tobacco on the table in front of him. Some kind of rope would probably be most authentic for late 16th and early 17th century then.

What a great discussion your question has engendered! Thank you...

I was reading a thread at another forum recently, you may find this of interest,
http://www.dawnmist.org/pipesale.htm

@jpmcwjr, Im sure you can dig up some art of period smokers like @pitchfork posted, might be helpful, and interesting

I'm not so hot at digging up art photos- you and Ed Green are the tops!
But here's a photo of an exhibit at the Greenwich Museum in London: Doh! Forgot the last link with the twist tobacco.
http://www.alamy.com/stock-photo-16th-century-dutchman-smoking-a-long-stemmed-pipe-with-another-pipe-50047939.html

Thank you for the dawnmist link! I don't own a clay pipe as of yet but I know where I'll be getting my first. :

Now that I have an idea which pipe I should find. Now since I enjoy non aro Burley blends which would you suggest? Or would it be better to go with a Kake or a plug/rope?
John

Pipe tobacco would have been available in Europe beginning in the early 16th century with the Spanish discovery of the New World. The tobacco that the early Spanish explorers found the Native Americans cultivating was a much harsher and bitter tobacco that didn't appeal to European palletes. So from it the Spaniards began developing a milder and sweeter variety and for nearly 100 years maintained a monopoly over the commodity that began taking over Europe by storm and made huge profits for Spain. As a matter of fact, the tobacco seed was so well guarded that it was punishable by death for a Spaniard to sell the seed to a non-Spaniard. However, that monopoly came to an end in the early 17th century when John Rolfe was able to secure some of the Spanish tobacco seed that he would call "Orinoco" and then began cultivating it in Virginia.
In regards to pipes, the Native Americans not only smoked long ceremonial pipes consisting of a carved stone or a clay bowl with a long reed stem, but they also smoked shorter stemmed hand-rolled clay pipes that were smoked by individuals. The Europeans appear to have copied these smaller Native American clay pipes for their use. To facilitate production, European clay pipe makers developed press molds rather than the Native American hand rolled techniques. 16th and early 17th century clay pipes had very small bulbous shaped bowls as tobacco remained a fairly expensive commodity and so pipe smokers of the period could only afford to smoke a "pinch" at a time. Clay pipes were produced all over Europe but Bristol in England and Amsterdam in the Netherlands were two of the largest pipemaking centers in Europe during that period. My company produces a couple models of 17th century clay pipes, but they date to around the mid-17th century. You might want to check out Heather Graham's clay pipes from her Dawn Mist Studio in the UK (www.dawnmist.org). She makes clay pipes that date back to the Tudor period in England up through the 19th century.

Dawnmist are a decent company to deal with.

Bought 2 clays from them recently.