I was lucky enough to come across this:

The 'hallmarks' look like Faux-jobbies to me - at least, are nothing I recognise as genuine hallmarks, so they tell me nothing about age of pipe.
So, my questions are these:
Is that a Ben Wade?
Does anyone know anything about 'The Champion'?
Can anyone cast any light on the Hallmarks?
If it's not a Ben Wade, no matter - it's a gorgeous looking pipe. 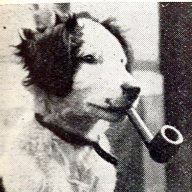 Hi Klause,
I'm traveling again so this will be brief.
"Champion" was indeed a Ben Wade pipe. I can't see enough from the pictures to even guess at dating yours, but I can tell you that the Champion was made at least through the thirties if not beyond. Before the second war Ben Wade clustered their offerings into three price points: "Ben Wade" included the higher end pipes (eg the Larnix, Super Grain, Selected Grain, etc), "BW" included the mid-level pipes (eg Statesman, Natural Grain, County, etc), and "BWL" were the least expensive (eg Hurlingham, Adelphi, Tense Grain). Champion was in the last group, and in the 1930s at least retailed for 2/6.
The Champion disappeared during the War when the Ben Wade line was materially slimmed down, presumably to reflect difficulties of supply. The name continued to appear in brand directories st least through the early sixties, however it's unclear to me whether production was actually resumed.
As always you have an eye for beauty; enjoy your new treasure!
Best,

As a post script, at 2/6 it seems unlikely to me that the band would be sterling. If that's right it would explain the odd "hallmarks", but I can't see the pictures clearly enough on my phone to really say .

Jon, I think this pipe should have been named for you! Thanks very much for the info - its very enlightening, and very much appreciated.
The pipe has literally just arrived on my desk - It's very small, light, and exceedingly elegant - really quite beautiful.
The hallmarks are indeed faux - W, I or X, D.
The stem is Orific, so pushes the date back to pre-war? It's also tooth mark and chatter free - a well cared for pipe!
Still, for 2/6, it was a bargain - I'm really looking forward to spending an hour in the company of this pipe.
Thanks again, Jon.

Very nice Klause. I love some of those older Ben Wades.

Thanks, Peck - appreciate it. These old pipes are very special.

May I ask where you found it?
Pax

Brass, it was purchased on eBay.

Hi Klause,
As far as the orific bit is concerned, I think that definitely pushes the date of mfr back a bit. The earliest mention I have of a Champion being made by Ben Wade is 1927, but there are gaps in my info and it's entirely possible they started making the pipe earlier.
Jon