Tobacco Cellaring – There’s an App for That 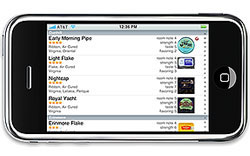 “Pipe Tool not perfect, but still a must buy for pipe smokers” – When you choose a hobby for its traditional nature, for the way it harkens back to a time before technology became king, then you do not expect to find it represented on your electronic devices. Online pipe forums were a welcomed surprise for those enjoying a pastime that encourages meditative solitude more frequently than face-to-face interactions. But it may be even more shocking to find that, when it comes to the leaf and briar, there’s an app for that.

Pipe Tool for the iPhone is the first large-scale app designed for pipe smokers. The simply designed program offers three main functions. First, it acts as a listing of tobacco blends, sorted by blender. Second, it provides reviews (from TobbaccoReviews.com) for those blends. Lastly, and most importantly, it lets the user input the contents of his or her tobacco cellar. The overall effect, bringing a wealth of tobacco knowledge to the fingertips, is very empowering. The ease and convenience of inputing tobacco while standing in front of the tins and jars makes it easier and more pleasurable to update the database than waiting to hit the computer while getting caught up in picking the perfect briar for the tobacco you just grabbed.

So many tobaccos you’d never have thought to put in an app are in this app, but not all of them are there. I found two out of three of my South African blends on the list, and adding the third was incredibly easy. Unlike so many other inventory programs, if you add a new Cornell & Diehl blend, it is actually sorted with the company’s other tobaccos that are already on the list. Volumes are the same way. All the standard sizes are already included, but if you have the odd 25g pouch, you can add a 25g volume. You can add 7.239 ounces, if you like to be overly specific. The flexibility is rather enjoyable. 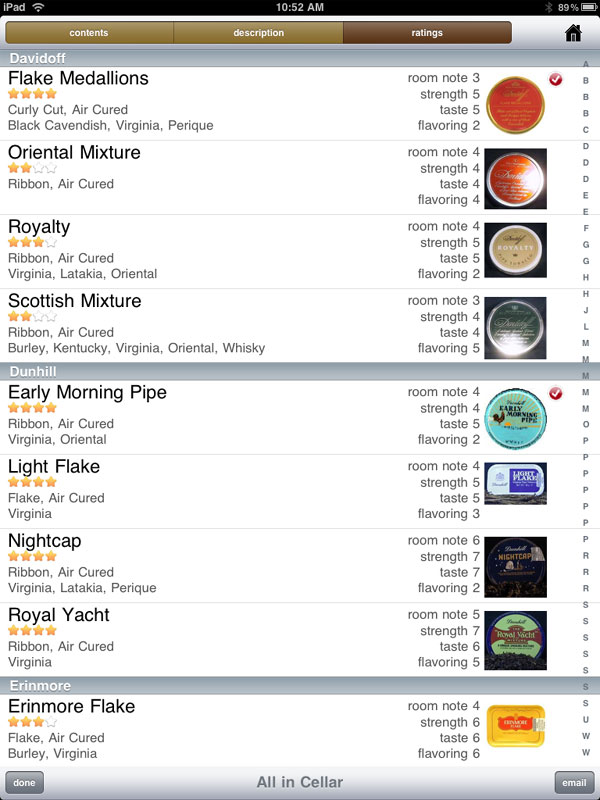 But while this is an enjoyable, useful app, it is not perfect. Because the app is self-contained – it does not connect to the internet outside of the ability to email a list of your tobacco – it can be used in the most remote of places that have never seen even an electrical outlet. That’s not a bad thing, but I’m guessing that most of using our iPhones aren’t cellaring our tobacco in a place civilization hasn’t reached. The downside is then that the app doesn’t automatically update. New tobaccos, while easy to enter – and, really, there aren’t a whole lot not represented, although I found a few – must all be entered by hand. And if you want a description, you have to enter that by hand too. And you can’t enter the reviews yourself.

The last issue is the price. At $7, it really is at the high end of the app scale. I can’t say that it’s not worth that much, especially because it is a one-time fee, but I have to say that I expect more from an app in that price range. Specifically, I want a prettier app. Pipe Tool is bare bones, and so is its style. Adding some round edges, some textures, some more dynamic color schemes might be enough to help smokers justify the expense. A trial version wouldn’t hurt either, while we’re at it. As it is, $5 probably should be the maximum price.
But is it worth it? Maybe. Is it worth keeping an eye on? Definitely. This is an app with potential. It could potentially become something quite special and regularly used by all iPhone-toting pipe smokers, and it could potentially be the forerunner to an app market catering to those who actually use their pipes to smoke tobacco. In both cases, it is a worth early entry for the genre.

Now that I’ve said all that, I still do want to urge all iPhone-using pipe smokers to buy this app, and I’m asking that for only one reason. If this app sells, more will come. If we create the demand, the market will proved a supply. The price is no more than a cheap tin of tobacco, so instead of buying an extra tin, buy the app and track the tins you already have. When someone creates an app to search for and buy pipes at your fingertips, you’ll thank me.

At a glance:
Functionality – 6/10 (A few tweaks would make add a couple points. Automatic updates would take it the rest of the way.)
Style – 2/10 (This app is no looker.)
Utility – 9/10 (This rating is for pipe smokers only, but if you are one and have this app, you’ll be using it every day.)
Value – 7/10 (The price is a little high, but with a little more work, the price could be a little low.)
Benefit to the smoking community – 10/10 (If smokers buy this, other developers will come. Other apps will come. Others will have to respect our hobby.)

Editor’s Notes:
– When contacted about some of the above issues the developer informed us of the following: There is an update for Pipe Tool on the way which will allow it to automatically download new tobaccos from Tobacco Reviews. The update will be free, should be available in two or three weeks.
– The Pipe Tool App works on the iPad as well as the iPhone.

–Pipe Tool App is Available in the iTunes Store Here