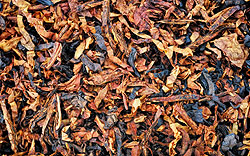 Most pipe smokers are familiar with the various types of tobaccos that are used to make up the blends on the tobacconist’s shelves, but the tobacco itself is only part of the story. The manufacturing methods and processes are very influential in the end product, so, in no particular order, let’s look at what can be done to tobacco to change the flavor, aroma and burning characteristics.
Flavoring- Today, flavoring (sometimes referred to as “scenting” or “infusing”) is probably the most common process applied to pipe tobacco. The most common flavors are food-based or liquor-based, with liquor, fruit and confectionery flavors being used most frequently.

In large manufacturing, industrial machinery is involved where the agents used for casing or top-dressing (more on this a little later) are introduced to the tobacco while being tumbled under pressure or vacuum and with heat. This opens the pores of the leaf and allows the flavoring to penetrate.
The main differences between a casing and top-dressing are the base and when they’re applied to the tobacco. Casings are usually water-based syrups or suspensions applied after cutting. Once the casings are worked into the tobacco, the cut leaf is usually heated, toasted or run through a drying chamber to get the humidity back to a usable level. Top-dressings are often alcohol-based, and are flavored the same as the casing, or are compatible with the casing. Casings are introduced to change the taste of the blend, whereas top-dressings are used to affect the aroma of the tobacco.


Another way to case and top-dress tobacco is to use a combination of heat and pressure, as is done with traditional Cavendish method tobaccos. The result is similar to a flake, but the sliced tobacco is usually tumbled (or “rubbed out”) so it looks like a short ribbon or broken flake. The Cavendish method generally does a better job of integrating the flavoring, but is more labor and time intensive.
There are other ways of accomplishing the flavoring of tobacco, but many of the processes are proprietary and vary from company to company, and will change based on the agent used (syrups, extracts, concentrates, liquor, etc.).
Heat- There are a number of ways that heat can be used to affect the flavor, aroma and burning characteristics of a blend, but each process is different, achieves a particular result and does something unique to the tobaccos.
Heating or cooking tobacco is usually accomplished by using lower heat for a long period of time. This process is useful when trying to dry out the tobacco or evaporate out undesirable elements without drastically changing the flavor of the leaf. The heat is almost always under 200 degrees F, and the time will vary from less than an hour to a day or more.
Steaming tobacco is useful when trying to introduce a flavor or essence into a tobacco (as it opens the pores of the leaf), and can be used before pressing to help the tobacco to stick together better. The addition of moisture to the heat makes the process more gentle on the tobacco and helps keep the moisture content in the leaf. Steam-toasting is when tobacco is steamed first and dried out back to its desired humidity by using dry heat (baking). I like this method when trying to caramelize the sugars in a tobacco.

Toasting is using moderate heat to alter a tobacco. Sugars caramelize, the color darkens and flavors change as dry heat transforms the leaf. Toasting is used extensively in most types of tobacco (except for cigars) and has a dramatic effect with Burley, and a significant influence on Virginias and Orientals.
Stoving is an extreme method of heat processing tobacco. Usually, stoving takes place on a tray or sheet of metal, with copper plates being the most traditional material. The most common tobacco to stove is yellow Virginia. When fully stoved, the result is jet black tobacco, and the flavor goes from citrus (in its yellow form) to spirits-like (like the sweetness of Bourbon, for example). The flavors also tend to intensify quite a bit when a batch of leaf is stoved. McClelland’s excellent 5105 is the most prominent example of a stoved Virginia.
Pressure– There’s a lot of pressure in making pipe tobacco, and, thankfully, most of it’s not on the blender. Rather, pressure is one of the most common processes used in many blends. Pressure is used to make flakes, cakes, ropes and roll cut tobaccos. This serves two general purposes: 1) to mature the tobacco (artificial “aging” by the use of pressure, most of the time with some heat involved), and; 2) to marry the flavors much more quickly.
Flakes are made by doing the initial processing and then layering the leaves (normally after being de-veined) and using a screw-type jack or hydraulic jack to put the tobacco under immense pressure, after which it is sliced and packaged. Cakes (also called crumble cakes) use the same basic method as flakes, but are made from cut tobacco rather than leaf. Ropes are twisted from large pieces of leaf and roll cuts are extruded (drawn tubes of tobacco under pressure) and sliced into “coins”. For all of our cakes, I use a 20 ton press to make the blocks (we call them “bricks”), and then the bricks are cut lengthwise and fed through a guillotine cutter. Many times cakes are sliced thicker than flakes, as cakes then to rub out much easier than flakes.

Additional benefits to pressing tobaccos is that they tend to be more stable in long-term storage and are a bit less prone to mold and drying out as compared to loose leaf blends. Also, all pressed and sliced tobaccos give the smoker a little more freedom in controlling the burn rate of the blend. If the flakes, slices or coins are stuffed more or less intact into the pipe, the tobacco will burn more slowly and cooler, but won’t deliver quite as much flavor. Rubbing the pressed tobaccos out will increase the flavor, but it will tend to burn a bit hotter.
Component aging– One of the biggest issues in blending is the consistency from one year to the next. Each year’s crop will have subtle or dramatic changes, and this can create issues that the smoker will perceive as quality control problems. One way to avoid drastic differences is to store tobaccos of the same type together, even though they’re from different years. The flavors will “marry”, making each more like the other (a milder yellow Virginia will become stronger, and the stronger one will mellow out). In my case, I will also use 90 to 95% of the vintage that I have been using, and blending in tobacco from the newer crop, changing the percentages gradually throughout the year. The combination of aging the tobaccos together and then blending them makes the transition less noticeable.
My purpose in pointing out these processes is not so much to let any “secrets” out publicly as it is to show that the tobacco is not the only factor that makes one blend different from another, and that every blender and company has their way of putting their own signature on the products they make. So the next time you light up, you might have a little more appreciation of all the little things that go into creating a product that you can enjoy.
If you have specific questions that you would like to address in a future column, please email me at russo@pipesandcigars.com, and I’ll address them as soon as I can.
MORE READING  Oh, The Things We'll Do for Pipe Tobacco
Post Views: 833