The Basics of Tobacco Blending 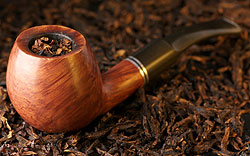 A lot of people have contacted me over the years about learning how to blend tobaccos, and, in fact, we have been considering doing some two day seminars for those who have the interest. The truth of the matter is that tobacco blending is both simpler and more difficult than it seems. What I’m going to attempt to do is give a guide to making your own mixtures, or, at the very least, give you an idea of how to alter or “tweak” a blend you already enjoy. But let me start by clarifying what I mean by the simplicity and complexity of blending.

Blending is simple– Once you become aware of the characteristics of each type of tobacco, blending becomes a lot easier as you can figure out what to add or subtract from a blend to make it sweeter, spicier, richer, etc.
One of the most frequently asked questions I get is “How do I know how much to add?”, and that is simple as well- start small and increase as you go. It’s always possible to increase the amount of an individual component, but it’s impossible to remove a particular tobacco from the blend once it’s mixed, so try adding 3 to 5% at a time. Most importantly, it’s all a matter of taste, so you already know what appeals to you and that’s where to begin- use the tobaccos that you enjoy in various proportions until you get what you’re looking for.
Blending is complicated– The very thing that makes blending easy (your individual tastes) can make it difficult as well. Until you become comfortable with the traits of each component, you don’t know how an addition or subtraction will affect what you’re working on, and your perception of a particular variety of tobacco can mislead you because, in combination with other varietals, a given tobacco, the taste, aroma and burning qualities can change drastically. 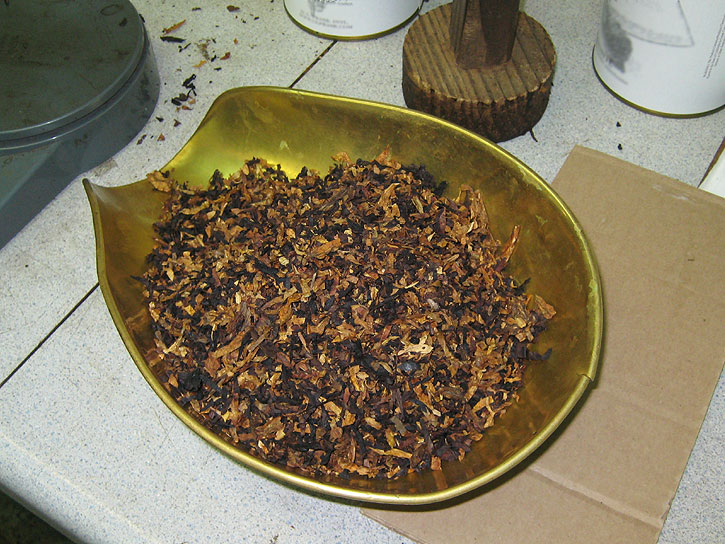 To give you a “jumping-off point”, let’s look at the fundamental characteristics of each type of tobacco you’re likely to use-
Virginia– This is, probably, the most commonly used type of tobacco for pipe blends. It is used in everything from aromatics to English and Balkan mixtures. Its basic characteristics are: sweet, toasty, citrusy, tea-like (will vary depending upon where it’s grown, the color of the leaf, the way it’s processed and other factors. Use Virginias where you’d like a tangy or yeasty sweetness. Please remember, though, that Virginias can burn a little hot for some people due to its high sugar content.
Burley– Burley is high in oils and low in sugar and has the ability to add a nutty, earthy, and sometimes a spicy note. The darker the Burley, in most cases, the deeper, fuller and more lively the flavor. Burley is a fairly cool smoke due to the low sugar levels, but it is one of the stronger varieties in terms of Nicotine content. Most modern aromatics and almost all of the old foil-pouch blends are Burley based.
Orientals/Turkish– This is a trickier area as the different strains of these tobaccos have widely varying flavors and aromas. Some are very deep, rich and musky, whereas others have a lighter, sweeter flavor with herbal or floral notes. These are among the more difficult tobaccos to obtain, but they also have an incredible impact on the taste of a blend. Among the Orientals, some of the better known include: Izmir, Smyrna, Xanthi, Bashi Bagli, Yenidje, Basma, Drama, Samsoun and Katerina. Overall, there are 40+ strains of these tobaccos, and Latakia is made by hanging Oriental leaves in a building with wood smoke. In Syria, the tobacco used is usually called Shek-al-Bint, and in Cyprus they normally use Smyrna.
Latakia– As mentioned above, this is a smoked tobacco, and its “campfire” aroma and flavor are very appealing to many. It is also a very cool smoking tobacco. If you want to cool down a blend while intensifying the flavor, Latakia might be a good bet. Just be careful with proportions as it can easily overpower and dominate.
Perique– This is a unique tobacco. Perique (the plant) is only grown in St. James Parish, Louisiana, although a variety of Burley is also processed in the same manner and blended with the original due to the fact that, for years, not enough Perique was grown to meet demand. To make Perique, the tobacco is pressed and fermented for a year. The result is a dark brown to black tobacco with a plum and pepper character. It smokes quite coolly, and a little will go a long way. It’s a real chameleon as well. The flavor will seem to change depending upon the other tobaccos in the blend. Watch the amount used in a blend, as the Nicotine content is pretty high.
Cavendish– Since Cavendish is not a tobacco but a process, it’s difficult to discuss its use as a blending component since it can be made of Burley, Virginia and/or Orientals. One form, however, that is frequently used is unflavored Black Cavendish (also known, mostly in the UK) as Brown Cavendish. This is a toasted tobacco with a mild brown sugar-like flavor and aroma which can show up in Burley blends, aromatics, English and even Virginia blends.
So, how do you get started? Use the following guidelines as a starting point, and go where your tastes lead you.

Here are my “sketches” to get you going–
English– Virginias and Latakia should be the major players. Some Orientals can be added as well as Perique, Black Cavendish and Burley (although some will say that the Cavendish makes it a Scottish blend, and Burley will make it an American English).
Balkan– Think of this as an English where Orientals are the secondary note with Virginias (if you use any) as more of a background influence.
Virginia– Obviously, the dominant element will be Virginias, but just about any other tobacco can be used to enhance the blend. It will still be a Virginia blend as long as the “spice” tobaccos are a small enough percentage. If you use Virginias with Perique as the secondary note, the blend is called a Virginia/Perique or VaPer.
Burley– This is, again, obvious. The bulk of the mixture should be Burleys with others added in small quantities so they don’t become dominant. If flavoring is added in minor amounts just to slightly influence the flavor and aroma, it is still a Burley blend. If enough flavoring is added to become prominent, it becomes an aromatic.
Oriental– In this case, Oriental or Turkish tobaccos are in the spotlight, while Virginias and other tobaccos are in lesser amounts. If Latakia is used, it should be around, or less than, 10%, or it becomes a light Balkan.
If you have specific questions that you would like to address in a future column, please email me at russo@pipesandcigars.com, and I’ll address them as soon as I can.