So Much for My Career As a Scientist 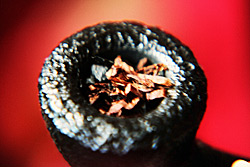 I recently had an idea (which is usually a sign of impending doom) regarding how we perceive the taste of pipe tobacco and cigars. I was aware of the theory of taste bud “zones” on the tongue, with sweet sensed on the tip, salt on the front sides, sour on the middle sides and bitter on the back of the tongue. Additionally, harsh spice seems to be sensed most in the back of the throat. This thought has recently been modified to include savory flavors (often referred to as “umami") being detected in the center of the tongue (see illustration).

The initial problem is that not everyone agrees that these zones even exist. If they do, then it should be possible to change the tasting experience by directing the smoke stream at different parts of the tongue. If these zones, however, are just imaginary, then the concept won’t work. Since I don’t have the equipment, a number of testers to work with and/or a set of protocols to use as a guideline, I used what, for me, passes as logic.

For the purposes of this test, just about any pipe will work as the aperture of the stem for virtually every model on the market is small enough to easily direct the smoke at a small area. Cigars are a bit more problematic as the ring gauge and the size of the hole will impact the result. For that reason, I only used a lancero or panatela and I punched them with a golf tee (which I would normally never do, but I did for the purposes of this test).

My pipe tobaccos were– a straight Virginia (McClelland’s 2010), a Latakia blend (Hearth & Home Magnum Opus), a Virginia/Perique (Hearth & Home Louisiana Red) and an aromatic (Cornell & Diehl’s Autumn Evening) . My cigars were a Joya de Nicaragua Lancero, a Punch Largo Elegante, an Ashton Panatela and a CAO Moontrance tubo. I used tepid green tea to cleanse my palate between puffs, and bread and cheese between cigars or pipes.

My methodology was simple, I held the opening of the pipe or cigar in front of one of the zones and took 2 long slow draws with the smoke hitting the area proscribed by the chart. I would take a sip of tea and would repeat, a total of seven times with each cigar or pipe to allow the smoke to hit all the zones. I would write my observations, have some bread and cheese and proceed to the next smoke. I set up my tasting schedule so that it alternated between cigars and pipes, starting with the mildest and moving toward the strongest flavors. 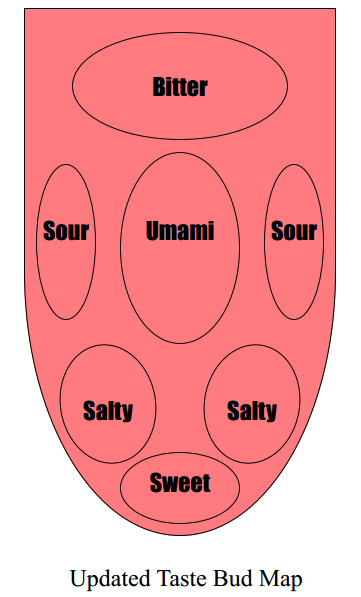 After completing my tastings, I analyzed my notes to try to put together a decidedly unscientific conclusion. Frankly, the result actually caused me to have more questions than answers. But I’ll give you the rundown.

When directing the stream of smoke at the tip of the tongue, the smoke definitely showed a change in flavor, but not necessarily a sweeter flavor. Certainly elements of sweetness were there, but it didn’t dominate. The salty zones revealed little, but I had surmised that that would be the case as saltiness isn’t commonly found in cigars or pipe tobacco to any degree. The sides of the tongue did detect sour notes, but, once again, the sourness didn’t dominate the taste, which I had expected (or hoped) it might. I picked up bitterness in the back of the tongue’s surface, but because of the proximity to the throat, the “catch” that one gets in or near the throat was more noticeable than the bitter. I did get some savory tones from the center of the tongue, but not enough to call this conclusive.

It then occurred to me that the problem might have more to do with the fact that smoke is made up of particles suspended in a gas, which means that the flavor-producing bits move around too easily to isolate. To that end, I tried small drops of sugar water, salt water, vinegar, Angostura Bitters and the liquid part of chili to test the same areas. Unfortunately, this didn’t fare much better as the flavor isn’t very noticeable until the tongue touches the palate, which pushes vapors up the back of the throat and into the sinuses, so when the tongue hits the roof of the mouth, the liquid spreads around, and the results become mostly inconclusive.

Did I notice a difference in flavor from one zone to another? Yes. Could I describe the differences? Not really. This was the frustrating part- I had a result but couldn’t give it a name. Frankly, I now tend to lean toward the camp that disbelieves the zone concept. The reason is that, for example, I detected more than just sweetness from the tip of my tongue, so my assumption is that, while it’s possible that the tip of the tongue has more sweet receptors, there are probably tastebuds attuned to other categories mixed in there as well.

At the same time, I found it intriguing to move the direction of the smoke around as I noticed some unusual aspects of the flavor as the smoke hit certain spots, and it made the pipe tobaccos and cigars more interesting as they exhibited characteristics that I had never noticed before.

MORE READING  Tobacco Cellaring - There's an App for That

So, my conclusion is this- I learned some things that I hadn’t noticed before, like just how impactful the role of the sinuses play in being able to taste different flavors and that moving the tongue across the roof of the mouth while tasting creates a variety of flavor notes that I hadn’t really paid attention to. But, ultimately, I wasn’t able to fine tune a technique that would allow me to enhance or dull a particular type of flavor element, which was my focus. But it also showed me that other sensations, like the tingle and burn in the back of the throat from a spicy cigar or dark Burley can really enhance what my taste buds are actually sensing.

Throughout my life I’ve been repeatedly told to “stop analyzing everything and just enjoy it” or I’ve been asked “why do you always over-think things?” Maybe the people who nagged me about these things were right after all. But I’m sure as hell not going to give them the satisfaction of saying so. Now all I have to do is to keep them from reading this.