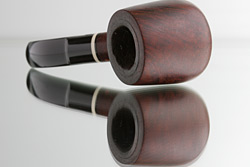 I used the word "ruminations" in the title of this piece. The word begins with "rum". Coincidence? I think not. To give you some insight into the way my mind, such as it is, works, I’m the kind of person who thinks about things like this: When people are looking for a lost item, and they finally find it, the typical comment is- "It’s always in the last place you look." Duh! Why would you keep looking once you found it?

So that leads me to a collection of unrelated thoughts that I figured I would pass along. If you find them interesting, then you must be as confused and bewildered as I am. And if you find them strange, then you’re probably safe from being committed, at least for the time being. So let’s venture forward.

The burning characteristics of tobacco are, obviously, very important when putting together a blend. The best tasting mixture in the world would be useless if it burns too hot, or won’t stay lit. That’s why in a blend like my Rolando’s Own, I included a bright Virginia with a chunkier cut, to keep it from burning quite so hot. 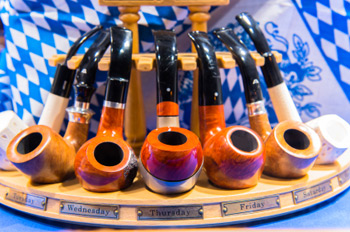 That got me thinking about the truism regarding chamber diameter as it relates to the type of blend. I’m sure you’ve heard people say that narrow chambers are best for Virginias, and wide ones work better for Latakia blends. So, just for curiosity’s sake, I tried some plain, ribbon-cut bright Virginia in a 5/8" chambered stack, and also in a pot that has a ¾" opening. As I expected, the flavor was better in the stack, while the pot had some charry notes. That certainly made sense. If the extra oxygen going into the pot increased the temperature, the sugars would burn, which would be less enjoyable.

I repeated the test using ¼" wide bright Virginia strips. It bore out the concept, as the tobacco tasted better, to me, in the pot, this time. The wide, long ribbons burned much slower, and the flavor in the stack was very thin, but developed better in the pot.

This reinforces one of the old saws of pipe smoking, and gives me a better perspective when working on new blends. I’m really glad, though, that I chose to do the test the way I did. If I had decided to use a fine-cut Virginia in that pot, I’d probably still have blisters on my tongue.

I’ve written about tobacco (and cigar) pairings with beverages before. I’ve claimed that alcohol, tannic drinks (like tea) and carbonated beverages work well, because there are elements of each that help to clean the residue of the smoke and distillates from the mouth and tongue. One day, it had occurred to me that the opposite might be true- i.e. a drink that coated the tongue would probably decrease the flavor of a smoke. The beverage that I felt might exemplify this best, is milk. So, in the cause of furthering science, I tested this, even though I felt that I would dread the results. Once again, Captain Obvious was correct. Not only did the fat from the milk insulate my taste buds from the flavor of the tobacco, when the smoke particles combined with the film from the milk, the residue was one of the most foul-tasting messes I’ve ever encountered. Sometimes I regret being so curious. 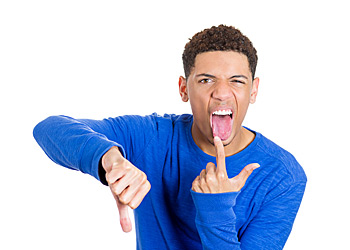 And speaking of milk, why in God’s name, when someone is pouring milk, and (s)he sees chunks mixed in with the liquid, would said person then proceed to smell it? Chunks=curdled, and curdled smells bad. Yet, people do this all the time.

There’s a packing method that recommends using a multi-flame torch lighter to ignite the tobacco. This runs counter to everything I’ve ever been told about pipe smoking. The idea is to keep the temperature low, for the best flavor. A triple-flame torch lighter can burn at temps above 2000 degrees Fahrenheit, which is more than double that of, say, a match. Besides, the forced flame can cause little sparks to fly around and burn your clothing. Those lighters serve a purpose; to light cigars in windy conditions, but they’re not good for pipes. As a side note, I’ve seen a number of pipes returned because of a burnout, and based upon the location of the burned spot, It’s fairly apparent that a torch was used, repeatedly, to light it. On a number of occasions, when we’ve sent them back to the manufacturer for replacement, they’ve refused, because of the location of the hole.

One of the most commonly asked questions I’ll get from customers is whether it’s worth it to spend more money for a pipe, based upon the maker. This is a hard question to answer, but my response is always the same. I have a 30+ year old Canadian with a meerschaum-lined chamber that I paid $25 for, and I have never had a bad smoke from it. It has fills, and isn’t particularly good-looking, but the bit is comfortable, and it always gives me a dry, cool smoke. That said, I’ve had a number of other basket pipes that I’ve stopped smoking after one or two bowls. Of the more expensive pipes I’ve purchased, there have been a few clunkers, but at the end of the day, my thought is this- spending more money doesn’t guarantee a better smoking pipe, but it definitely increases the odds. In spite of that…

Because of a project I’ve been working on, I’ve been smoking blends in a number of corn cob pipes, lately. While I’ve always appreciated and enjoyed a cob, my respect for these pipes has grown even more while doing my due diligence for this effort. Smoking a corn cob pipe is similar to buying a used car at a good price, and it lasts for ten years. The major difference between the two is that I’ve seldom had a bad cob, but more than one bad used car.