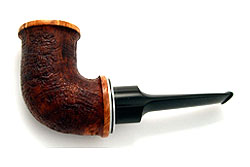 For those who are unfamiliar with upstate New York, it’s probably far different than one would think. A number of people I talk to for work seem to believe that upstate is just a concrete-and-steel extension of New York City. Actually, most of this area is forest, mountains, lakes, farms and smallish cities, towns and villages. One other thing that surprises people is that the upstate region is home to a number of well-known pipe makers. In the area around Albany (the state capital) downstate to around the midway point between the capital and NYC you’ll find Paul Bonacquisti, Joe Skoda, the Kaywoodie/Yello Bole/Medico facility and the subject of this profile, Rolando Negoita.

On a recent Sunday, I made the hour-and-a-half trek from Albany south to the Catskill Mountain area to pay a visit to Rolando and his lovely wife, Alexandra. The last 20 or 30 minutes of the trip are through narrow, wooded roads that are spotted with homes and farms, but little traffic. 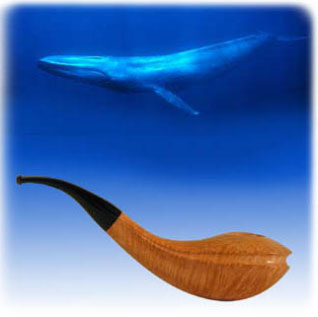 Please don’t expect me to be objective when talking about Rolando. We’ve been friends for a number of years, and I’ve marveled at his work for an even longer time. I was first struck with his work when I saw a picture of one of his pipes, which was carved to look like a blue whale. The fluid lines and the use of the wood’s grain to enhance the shape of the pipe just stunned me. Little did I know that I would soon meet Rolando and that due to being in reasonable proximity to each other and running into each other at pipe shows, we would become friends.

We sat in the workshop which occupies the entire bottom floor of his home. The area is packed with lathes, bandsaws, vacuum equipment, workbenches and display cases with examples of his pipe crafting and metal work. We were relaxing over a couple of pipes and the comforting glow and warmth of the wood stove.

Rolando and Alexandra are originally from Romania, where he began learning sculpture. Around the same time, he became intrigued by pipe smoking, but pipes and tobaccos were contraband, and were very difficult to procure. He started to make some pipes from fruit tree woods, as briar was unavailable in his country. Around 1990 they decided to come to the U.S., where Rolando decided to concentrate on his jewelry-making, as he saw very few pipe smokers here. Living and working in New York City, he eventually discovered Ed Burak’s Connoisseur Pipe Shop, where he picked up some inspiration from Ed’s work, and Rolando began to make pipes.

If you’re unfamiliar with his work, take the time to visit the galleries on his website, www.atelierrolando.com, which was designed by his wife, Alexandra. If you scan the galleries, it’s obvious that Rolando’s design influences are decidedly organic. Beside the aforementioned blue whale, he has created pipes that have been inspired by the nautilus, walnuts, trees and other natural items. He also has taken visual cues from the art deco style, and he has merged elements from different art forms, rather than from traditional pipe shapes. That said, he still turns out some time-honored styles as well, and they always seem to have remarkable balance and fluidity. In thinking about why Rolando and other pipe makers turn out the classics, I’m reminded of something that Tonni Nielsen said a couple of years ago- "If you can’t repeat the same shape, you’re not a pipe maker." What he was referring to was the ability to make a classic style that had the right symmetry and lines, and I’ve found in talking to some of the finest carvers that they regularly turn out a standard shape as a way to stay sharp.

Because of his metal-working background, Rolando frequently uses silver, copper, titanium and other metals in his designs, as well as making some incredibly beautiful and functional knives. He has even merged the two with his well-known pipe that he calls the katana, as it is shaped and finished with wrappings just like the Japanese sword.

One of the reasons that I dropped in for a visit is that Rolando wanted to me a new concept that he has been working on, called the Conducta series. This idea, which is also being delved into by a number of other pipemakers including Tom Eltang, uses a secondary chamber between the tobacco chamber and the mouthpiece where the smoke enters, swirls, cools and extracts the moisture before the smoke reaches the smoker. To do this, the stem has a very wide, but short tenon with a two degree bias that allows for a snug fit.

Rolando handed me a short rusticated pipe that looks like a section of plumbing. He had made this one for me to try. The pipe, even though it’s rather chunky, is a featherweight, and it only measures 4 ¼ inches in length. He wanted me to really push the smoking characteristics of the pipe, so I loaded a full bowl of my new Virginia Memory #10, and lit up. I had expected a good smoke, but I was in for a big surprise. The first few puffs greeted me with flavor so much more intense than I figured on that I took a couple more puffs to verify that I wasn’t imagining it. This short pipe not only delivered incredibly sweet and smooth flavor, but did so while being far cooler and drier than most pipes I’ve smoked. In fact, I smoked two bowls back-to-back (the second was my other new blend, Virginia Night), which is something I rarely do to avoid damaging my pipes, but that’s what Rolando wanted me to do. Because I tend to push and pull to keep a dying pipe to come back, the heel of my pipes are usually damp enough that I dump the last 1/8th to 1/4th of the bowl. I smoked both bowls clean and dry to the bottom, which I have never been able to do in the past.

MORE READING  What is Cavendish?

We talked a while longer about things like fills and flaws (he doesn’t allow pipes with fills to leave his workshop) and pipe shows (he and Alexandra will be at Chicago and Las Vegas this year, for sure), and enjoyed homemade crepes with fruit filling and ice cream along with coffee, and as I sat there, it struck me that only a few years earlier, I was starstruck to have met Rolando, at yet today, we are friends. But our friendship hasn’t clouded my admiration of his work, and having had the time to visit with him a few times, I’ve seen enough to be even more impressed.

From Romania and little knowledge of pipes to the American Dream of following one’s own path to success doing something that inspires passion, Rolando Negoita’s journey has been a fascinating one, and we’ve been the beneficiaries.