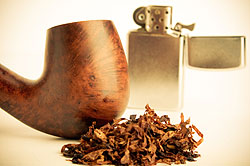 Recently, after a long, but productive day at work, I came home and ordered a white pizza with clams. I sat down and ate my pizza, which I like to dip in peanut butter, along with a chocolate shake and smoked a heavy Latakia blend with Perique, while watching some reality TV.

When my eyelids began to droop, I headed off to bed. I fell asleep very quickly (a rather unusual occurrence for me) and was blissfully relaxed and dreaming (something to do with the GEICO gecko trying to figure out where to put a pipe, pouch, tool and lighter when going out), when my slumber was rudely interrupted by a slapping sound.

I sat bolt upright in my bed to see three men in non-descript black suits, white shirts and black ties and shoes and RayBans. One had his hands in his pockets, another was checking his cell phone and the third was absent-mindedly slapping a rubber hose into the palm of his opposite hand.

I politely asked them "What the hell are you %#*@^!! &*@$##* doing in my room, and how did you get in here?" Pocket-Hands said, "How we got here is classified, and the reason we’re here is for information and your cooperation." I told them that an email or phone call would have been a more professional manner in which to communicate. Cell-Phone Guy said that that would depend upon one’s profession. I asked for ID, but they simply said that they don’t have ID and didn’t need any. All I needed to know was that there would be dire consequences if I didn’t cooperate.

"What do you want to know? I’m a pretty ordinary guy, and I don’t have any secrets as far as I can remember." I stated. Rubber-Hose said in reply "First things first…are you an MOD?" "Manager on duty?" I asked. "No, idiot, Merchant of Death!" 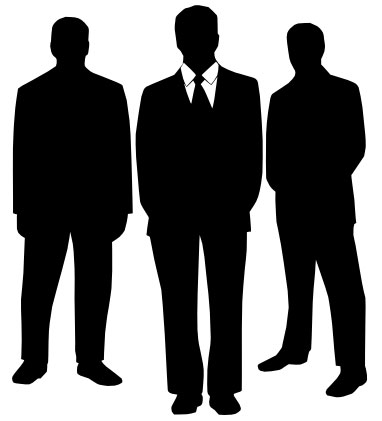 I was stunned. "I’ve never killed anyone. Hell, I don’t even step on bugs if I can avoid it." was my response. He peered at me over the top of his sunglasses and said, "So you deny that you make and sell tobacco?"

"No, I don’t deny it, but the last I looked, that wasn’t against the law." I said. "You’re absolutely right about the legality, but the Morality Police aren’t concerned about laws" was his reply.

"No, sir, we’re the people who know what’s good for you because you’re too stupid to make your own decisions." said Cell-Phone Guy.

"So, what exactly have I done that I deserve to be threatened?"

"You sell tobacco, and continue to come up with new blends to tempt people to smoke." said Pocket-Hands. "That’s true; that’s what I do for a living, but I don’t go out and give tobacco to people who aren’t smokers or who are underage. I make tobaccos and sell them to adults who are capable of making their own decisions." was my reply.

"No, they’re not. If they were capable of making decisions, they wouldn’t smoke."

I finally got fed up, and didn’t care about the consequences. "Who gives you the right to decide what’s right or wrong? You anti-smoking zealots don’t know the difference between cigarette smoking and pipe and cigar smoking, and you use junk science to "prove" your points. Hell, the chemicals used to tan the leather in your shoes are probably more dangerous than anything that I make, so why don’t you wear canvas sneakers?", I replied, stepping off my soapbox.

"They don’t look good with the suit. Besides, we don’t have to know that what we say is true; all we have to do is trust our superiors, who are much wiser than anyone else we know. " was all I got. "So, are you going to cooperate?"

"I haven’t heard a request, mandate or proposal. What am I supposed to do to cooperate?" I asked.

"Make a public statement that you finally realize that what you’re doing is wrong, that you’ll be giving it up and you encourage anyone who hears your statement to quit smoking." I guess they figured that my hearing that from the guy with the rubber hose would be most persuasive.

I paused before giving my reply. "I break out in a scaly rash if I lie, and if make that statement, I’ll spend the rest of my life looking like an armadillo. I don’t suppose that if I ask nicely, you’ll leave, huh?"

"’Fraid not. We have a job to do. You have two choices: do as we ask, or disappear."

I thought about it for a moment and replied, "Actually, there’s another option." I reached out to my nightstand and took a humongous Ardor full-bent egg from the rack which holds about a half-pound of tobacco and loaded it up with Larry’s Blend. I then grabbed a Bernz-O-Matic torch I keep nearby and lit up. As the room filled up with a blue-white cloud of Latakia-rich fumes, my visitors all went for their government-issue handkerchiefs and covered their noses and mouths. 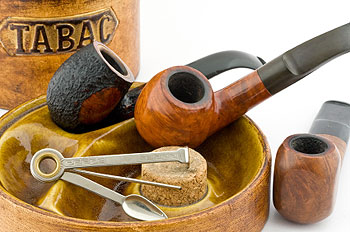 "Too late," I said, "according to the most recent proclamation by the Surgeon General, you’ve already been exposed to enough smoke to alter your DNA. By tomorrow, you may all turn into iguanas or amoebas. Since it’s obvious that you believe every word you’re told by your superiors, I would suggest that you all go out for a nice meal and a few drinks, because you’re almost certainly going to die soon."

Rubber-Hose took a couple of menacing steps forward, and…

Then I woke up in a puddle of sweat, heart pounding while thanking God that it was just a nightmare. And I thought about the morality of what I do for a living. At worst, I help people get through their day with a little less stress, and at best, I bring some pleasure to folks who are looking for a respite from life’s difficulties and worries. My moral crisis was over.

However, I think I’m going to change my stance on the wisdom of combining a white clam pizza, peanut butter, a chocolate shake and a Latakia/Perique blend. Or maybe it was the reality TV…