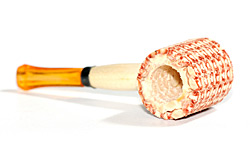 Last month, when writing about some random thoughts, I mentioned that I had been smoking corn cob pipes frequently as of late, because of a project I was working on. Since that article appeared, we broke the news, here on PipesMagazine.com, that the project was the development of four tobaccos that will be sold under the Missouri Meerschaum name. I was honored to have the opportunity to help create new products bearing such an iconic brand name, and I gave myself the added challenge of trying to make blends that would taste their best when smoked in a corn cob pipe. Once I had completed my work on the project, it got me thinking about cobs, and I thought that I’d share my memories and thoughts with you.

When I began smoking a pipe, I stayed exclusively with briars. As I think back, I can’t recall, for sure, why. The most likely reason is that my father only smoked briars in the house. The only time I saw him with a cob was when he was fishing, so I guess that I must have assumed that the reason he did that was because they were inexpensive, and he was concerned about dropping his pipe in the water. Of course, I didn’t think about how light the pipes were, and that with a slightly softer stem, they were much easier to clench than most briars, but I was a novice, and didn’t really give it much thought. My real exposure to corn cobs didn’t begin until a while later. 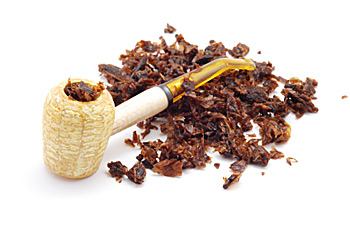 After a few years working in a tobacconist’s, in the late seventies, I took a job as a wholesale representative for a number of tobacco-related product lines, including a brand of cobs. At that time, I believe, there were still three US companies making corn cob pipes, and I’m fairly sure that they were all in Missouri. The company I represented was Buescher. Since I had never really smoked cobs, I took some samples to smoke, and wondered why I had never tried one before. The smoke was dry, cool, and there was a hint of buttery sweetness that I had never noticed in a pipe before. These inexpensive pipes quickly became a regular part of my rotation. Buescher has long since gone the way of the dinosaur, but my enjoyment of a corn cob didn’t skip a beat, because of the continued existence of the biggest brand, and the only one still operating—the Missouri Meerschaum Company.

As I smoked them more regularly over the years, I learned a few things that helped me enjoy them even more. I found that not allowing a cake to build up made for a more enjoyable experience … for me. Many people prefer to build some cake in their cobs, but I enjoy them better without it.

If I’m outside with a corn cob pipe, it will almost always be with a windcap in place. The only cob that ever burned out for me was one that I smoked on the golf course regularly, and the course I usually played was wide open, so it was windier than courses with a lot of trees. The only thing I could attribute the burnout to was the steady breeze.

Very few blends seem to suffer greatly when smoked in a cob, and I found that intriguing, so I tried to determine what the reason was. Most people describe a cob’s influence on a blend as neutral, but as I noted earlier, I detect a warm and slightly sweet addition to most tobaccos I’ve smoked in one. It makes perfect sense to me, as corn has sugar in it, so it stands to reason that the cob retains some as well. Therefore, when I worked on the blends, I attempted to keep them from being too sweet. They’ll smoke fine in a briar or a meer, but that added flavor from the pipe really makes them better in a corn cob. 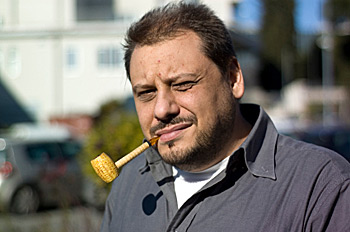 Before I became involved with this project, even though I had sold corn cob pipes to distributors decades before, there was a lot that I didn’t know about what goes into making them. By now, most pipe smokers know that the strain of corn grown by the Missouri Meerschaum Company was developed specifically for their purposes. The cobs on the ears from that strain have a thicker, woodier core, and grow somewhat larger than most types. One thing I wasn’t aware of, until recent communication with Phil Morgan, the General Manager of Missouri Meerschaum, is that they actually grow the corn themselves.

Partly due to their affordability, people have experimented with corn cob pipes to customize them in various ways: using pipe mud (a mixture of cigar ash and water) to fill in the bottom of the chamber, opening the bottom of the bowl to fit it with a hardwood plug to extend the life, or by buying aftermarket stems made of vulcanite or acrylic which are more durable than the originals. But most of us just load ’em and light ’em. The appearance of the humble corn cob befits the way they’re used. They’re rustic, and seem to be at their best when treated with less than kid gloves.

I still love my briars. The grain can be stunning, and sandblasted and rusticated finishes are often as beautiful, in their own ways, as a tight straight grain. I still marvel, after all these years, at the often intricate craftsmanship of a finely detailed meerschaum carving. But after spending a good portion of the last year with a corn cob pipe within an arm’s reach, I’ve gained a whole new appreciation for this simple, but amazingly functional, development in pipe smoking, and there will always be a bunch of them in my collection, but now, they’re treated with a lot more respect.

If you haven’t smoked one lately, or ever, it’s time to give one a try. It may seem like a quaint anachronism, but a cob is much more than that. It’s a fully serviceable smoking instrument that can deliver years of enjoyment.

I’ve been playing around with an idea that I’m going to talk to Phil about. When, and if, it’s ready, I’ll let you in on the concept.