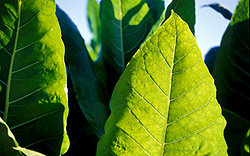 As with just about any subject, there are a lot of common fallacies about pipe tobaccos and how they’re made. It’s a shame, really, as, through the years there have been many good books and magazine articles that have addressed these inaccuracies, but most pipe smokers have never read them. So I will try to dispel some of the falsehoods about the noble weed.
1) Latakia is made by hanging tobacco in a barn over a fire made with camel dung.

This is probably the most common of all the old-wives’ tales about pipe tobacco. Looking at it from a logical viewpoint, it’s easy to understand where the rumor got started. Half of the statement is true. Latakia is made by hanging tobacco in a building. The tobacco used in Syria is Shek-el-Bint (var.), and in Cyprus, it is made from Smyrna. The leaves are hung and a fire is built, but that’s where the truth and fiction diverge. No camel dung is used in making Latakia. The fire usually uses oak (Syria) or aromatic woods like Juniper (Cyprus). That’s the reason for the “campfire” or “beef jerky” aroma. The rumor started because camel dung is used as heating fuel in the Middle East, just as buffalo chips were used by Native Americans. It doesn’t take much of a stretch to see where someone trying to be funny or attempting to be a know-it-all would make such a comment. To put it to rest once and for all, there is no poop-flavored tobacco currently made.


2) Cavendish is a tobacco.
There is no tobacco plant called Cavendish. These tobaccos were originally made by pressing tobacco leaves together, sometimes using heat as part of the process, and frequently by adding flavorings (liquors, syrups, etc.). The tobacco was usually allowed a fair amount of time to mature, marry and assimilate the flavorings, then it would be cut like a flake, and normally tumbled out so it looked like a ribbon cut or a broken flake. Black Cavendish confuses the issue further by using cut tobacco that is typically treated with sugar water and then toasted until nearly black, which caramelizes the sugars and gives the tobacco a brown sugar aroma. What’s confusing is that most of the tobaccos we know of as Black Cavendish (Lane’s BCA, Altadis ZBC) are toasted Black Cavendish with flavorings added, which makes them moist, whereas toasted Black Cavendish tends to be dry. Making things even worse is that through common usage the term has come to mean any tobacco that has been flavored with a casing and/or top dressing. For the record, Cavendishes are usually made of a Burley or Virginia base (often using both) with the possible addition of some Oriental tobaccos as well.
MORE READING  Savor the Flavor

3) Virginia and Burley are grown in the U.S. and Orientals are grown in Greece and Turkey.
Although a good portion of both Virginia and Burley tobaccos are grown in the mid-Atlantic states of the U.S., they can, have, and continue to be successfully grown in many different places throughout the world. African Virginias are used by many of the European pipe tobacco companies (like the Lakeland tobaccos), and Mexican Burley shows up in a number of well-known blends. In recent years, much of the U.S. Virginia crop comes from Maryland and states other than Virginia. Orientals are certainly grown in the area where Turkey and Greece meet (especially the area known as Thrace), but they are grown in a number of the former Soviet bloc countries as well. The only thing about Orientals is that planting them outside their original growing region changes the climate and soil conditions which seems to affect these varietals more so than other strains. In fact, at one time, because of the growing popularity of cigarettes containing Oriental or Turkish blends, an attempt was made to grow these tobaccos in the United States. The experiment was a failure, however, as the plants yielded tobacco that was virtually identical to Burley, due to the American climate and soil. The only tobacco I can think of that is only grown and processed in only one country (other than certain strains of cigar leaf) is Perique, which is grown in Louisiana (St. James Perique) and Tennessee (Acadian Perique) and processed strictly in St. James Parish, Louisiana. (More on Perique in, “The Mystique of Perique“.)

4) Moist tobacco is fresh, dry tobacco is stale.
The correct statement would be- “Moist tobacco is moist, dry tobacco is dry.” The first point is that no one that I know of enjoys smoking fresh tobacco. Tobacco needs time to properly dry and cure before the processing even begins, otherwise, the resulting blends would be unpalatable. The notion of moist and fresh being desirable started with advertising for blends that came in sealed tins and pouches, which tended to be more moist, especially those made with a significant amount of casing and/or top dressing. I find that tobacco stays lit better, delivers more flavor and actually burns cooler if it’s a bit on the dry side. Moist tobacco requires more frequent puffing to get the burning temperature up high enough to keep damp tobacco lit, which leads to hotter smoke, which also contains a significant amount of steam, which is more likely to burn the tongue. Also, adding moisture to tobacco is cheaper than adding more tobacco, so you get more for your money with slightly drier weed. I know I’m not alone in this, as Craig Tarler of Cornell & Diehl and I have discussed this subject and are in agreement.
5) Tinned tobacco is better than bulk.
Put simply, there are some tobaccos in tins that are of average quality or less, and there are some excellent quality bulk blends. Would anyone call McClelland’s 5100 or Cornell & Diehl’s Pirate Kake low-quality? I would hope not. All of my own Hearth & Home tobaccos are available in bulk and tins. What’s the difference (other than cost)? One is in bulk and the other is in a tin. The tobaccos are identical. But here is where I think the misconception, at least in part, comes from. When you tin a blend, it takes longer to get to market because of the time it takes to package it, and sometimes due to shipping. Since the tobacco has had more time to age and marry, people may detect a difference and assume that there is something about the blend itself that has changed. In fact, if you put the bulk in a clean jar for the same amount of time as the tinned tobacco, the blends should be virtually identical.

These are just a handful of “urban legends” about pipe tobacco, and I hope you’ve found them informative. If you know of any other mistaken beliefs about tobaccos or pipes, please email me and I will address them in a future column.
Whatever you do, have fun!