Burley – The Rodney Dangerfield of Tobacco 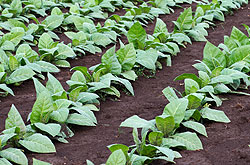 "I don’t get no respect, no respect at all!" If you’re 30 or older, you can’t read or hear those words without seeing the image of Rodney Dangerfield straightening his tie. Well, from my perspective, Burley is the tobacco equivalent of the late comic. Let’s take a look at this mistreated leaf.

Burley is another strain of nicotiana tabacum, which includes virtually every type of tobacco used commercially. The leaves of this plant are moderately sized, and the plants are grown widely from the mid-Atlantic region of the U.S., through the south and into the Midwest. In addition, Burley is cultivated in Canada, Malawi, Brazil, Mexico and Argentina.

What characterizes Burley are its low sugar content, high oils and moderate to high nicotine. The dark strains of the plant are earthy, spicy and cigar-like, and have a heavy vitamin N jolt, whereas the lighter Burleys (generally referred to as White Burley) are nutty, sometimes with a bit of a cocoa note, and a more moderate nic kick. 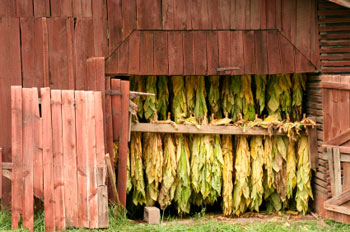 Most types of tobacco are cured primarily using a single method of curing, but Burley is an exception. Burley is usually air-cured, meaning that time and the movement of air through the barn are what dries and cures the leaf. Dark Burley used in cigars (like DeNobili and Parodi) are sometimes fermented after curing. Another type of dark Burley is dark-fired (most often referring to Kentucky Burley), which is cured over an open fire, and the tobacco is flavored with the smoke, similar to the way that Latakia is made.

Even though some pipe smokers look down upon Burley as the least common denominator of tobaccos, it certainly is not. In fact, it is the most versatile of all tobacco strains, in my opinion. It’s used in pipe tobacco, cigarettes, cigars, snuff and chew. It also has the unique property of being able to absorb flavorings readily, and the white strain is mild enough in flavor to allow the flavorings to take center stage. Almost certainly, Burley’s ability to readily absorb casings and top dressings are one of the reasons that it became so popular with the advent of the "aromatic era" starting in the sixties.

Burley sort of straddles the line of demarcation between the light and "black" (cigar) tobaccos. In its milder versions, Burley has a slightly sour note, sort of like a walnut, but a relatively neutral flavor, so when flavors are added, they are more noticeable than they would be with a tobacco with a stronger native flavor. With the darker strains, there’s a spiciness (caused by the higher nicotine level) that will tend to cause a "catch" in the smoker’s throat, along with an earthiness that is very reminiscent of cigar leaf, especially Honduran leaf.

Because Burley tends to have a bit more Vitamin "N", it’s routinely used when a little more kick is wanted. Most of the powerful blends from the British Isles use dark Burley to fortify them. The same principle is used when Burley is incorporated into cigarette tobacco, chew, or snuff. In fact, there are at least two blends that I can think of that probably weren’t blends at all, but straight dark air-cured Burley. That kind of tobacco would have a very cigar-like flavor and a kick like a Missouri mule.

One of the caveats with the use of Burley is that it has an alkaline nature, meaning that the smoke will tend to have a pH above 7, and one of the things that will cause the body to absorb nicotine more readily is an alkaline (or basic) matrix, which makes sense if you realize that nicotine belongs to a group called alkaloids. Caution has to be used when working strong Burley into a blend so the end result won’t be overpowering. 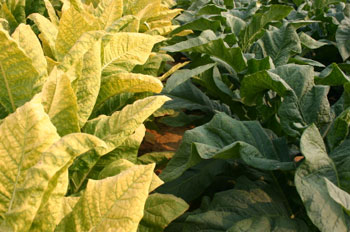 Burley is also used in more different forms than any of the other types of obacco. You’ll regularly find it cut into shag, fine and wide ribbons, flake-cut, crimp cut, pressed into plugs, cakes and flakes, along with an old favorite, cube cut. Just about every form of chew (loose, plug, moist snuff (dip)) contains some form of Burley. In this particular usage, the ability of the leaf to take on flavorings is even more apparent. That’s why chewing tobacco often has a very distinctive flavor, typically confectionary or fruit, and often in combination with base sweeteners like molasses and licorice (yes, licorice can be considered a sweetening agent).

There have been a number of legendary Burley-based pipe tobaccos, and none more so than Edgeworth Slices and Ready-Rubbed. These blends had minimal flavoring and a rather neutral aroma. The flavor came across as cocoa and roasted nuts, with a remarkable amount of depth considering that the tobacco was pretty much straight Burley.

Besides facilitating the absorption of nicotine, the alkalinity of Burley has an additional effect- the possibility of tongue bite. Of all the different types of tobaccos, the one most likely to cause bite is Burley, but it’s important to understand that tongue bite is a biochemical reaction, not the same as "leather tongue" which is what one might get from smoking too much or too hot.

When tongue bite attacks, it feels almost like a cramp. Because the reaction is caused by the high pH of the smoke, having something to drink that us somewhat acidic, like a dry wine or even soda can help fend off the discomfort. Additionally, the acid will help slow down the absorption of nicotine so you’ll be less likely to have to deal with hiccups, headache or queasiness. And although this is a little off-topic, try to keep some candy or sugared soda around when smoking anything high in nicotine as nicotine will cause your blood sugar to initially rise and then drop. That precipitous fall is what causes most of the nicotine issues.

As a blender, I learned long ago not to look down upon any tobacco as they all have a purpose. That why I have always found it amusing when people express a strong anti-Burley sentiment as it can be one of the useful and versatile tools in a blender’s bag.

Pipe Tobacco – it’s not all the same