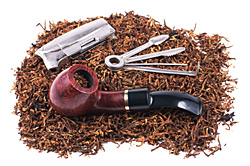 Lord knows that I have been called a "tool" by a number of people (along with a plethora of other choice epithets) but what the title refers to is the frequency with which we, as pipe smokers, have to serve as a tamper (your choice of finger), because we’ve misplaced a pipe tool.

Over the last 39 years (has it really been that long?), I’ve been given or purchased dozens of various pipe tools. From simple pipe nails and Czech tools, to smoker’s knives, ornate tampers, screw-apart tools, and tampers made of antler spikes, empty brass cartridges and the simple wooden dowels used in slow-smoke contests, I’ve found a way to lose just about all of them. I’m of the belief that pipe tools are somehow related to socks, because, just as a clothes dryer is an inter-dimensional transport device for the other sock, my pockets must open up a window into an alternate universe to which my tools are sent, never to be seen again.

The one I had for the longest time was a Sheffield knife. I owned that for over 30 years, and I loved the way it felt in my hand. The main reason I didn’t lose it is because I’d always forget to take it with me. Since it almost never made it into my pocket, it couldn’t be transported into the Twilight Zone. Finally, I decided to take it with me to work. At this point, I’m sure that it’s being well-used by a pipe smoker in the Andromeda galaxy.

I prefer simplicity as it refers to tools. I like a tamper/pick combination, and don’t like blades. I rarely use the scraper/spoon/blade, as I prefer to use the pick. I like things that are compact and less likely to poke holes in my pocket and my thigh. Fortunately, there are a lot of items that fill the bill.

As far as the tamper goes, I like angled heads, especially for smaller chambered pipes, so I can "manicure" the ash. I also like concave tampers for a similar reason — I like to tamp around the perimeter with just a light tap on the center.

Since all of these devices have a proclivity for time/space travel, I have been relegated to using the following as a tamper from time-to-time: nails, bolts, screws, pens, markers, knife handles, screwdrivers, swizzle sticks and even cigars.

Most of the pipe lighters I’ve bought in recent years (it’s a roll of the dice as to whether I’ll lose a lighter before it craps out), have had pipe tools integrated in the design. The Old Boy styled lighters have a pull-down tamper that can be removed to use as a pick. The problem with this utilitarian design is that, since the tamper is, in effect, a pipe tool itself, you can guess what happens. I now have two of these lighters with no tamper. 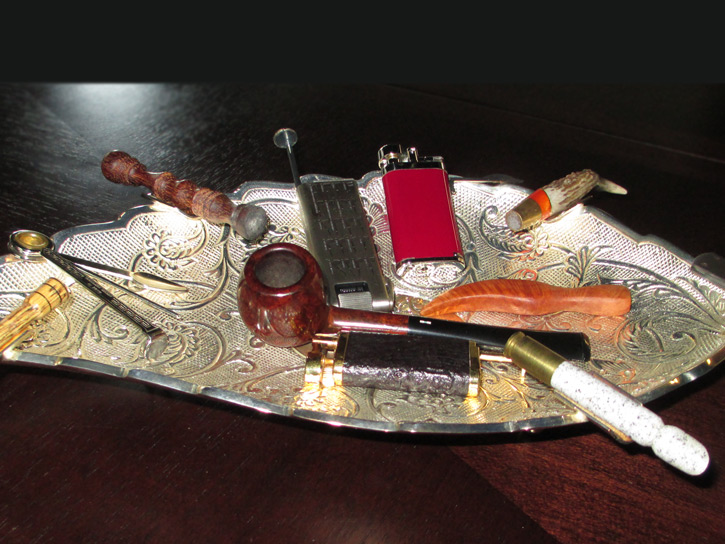 Other lighters have, essentially, a Czech tool that swings out of the side of the lighter. For most pipes, these will work just fine, but for deeper chambers, the tools won’t reach the bottom.

I just briefly looked at the pipe tool section of our website. We have about three dozen different types of tools/tampers, and when you count the one-of-a-kind items, the number skyrockets.

I have a number of acrylic tampers in a wide variety of colors and patterns and beautifully integrated brass feet. We had a gentleman who has made tampers for us turned from a variety of woods, but he couldn’t figure out how to affix a brass foot or cap on the end. After a lot of head scratching, I had a thought, went out and grabbed something and asked him if it would work. It was a brass hinge pin from one of the doors in the store. He laughed when he saw how simple the answer was. He just drilled out the tamper and epoxied the pin in place.

The one made from the antler spike was a gift from one of our customers. It came along with a very nice note, and he explained that he shot the whitetail himself and had crafted the tamper in his shop. He said that he made one for himself and that it didn’t need a metal end because the material was very heat resistant. Although I’m not a particularly sentimental guy, I never used it as a tamper and had it mounted, along with the note in a shadowbox.

I have a few tampers made from spent brass cartridges, but one was especially neat because the person who made it into a tamper carved a "bullet" which served as a pick. I took it a step further. I pulled out the pick and ground the edge so I could pull off the pick and use it as a cigar punch — it’s now a three-in-one.

Someday, I may find myself falling into a rabbit hole and landing hard at the bottom. If I’m lucky enough to have put a lighter in my pocket that actually has fuel in it, I will light it. I’ll realize that I’m in a room full of all the pipe tools that have ever been lost. As happy as that would make me, I’ll want to find my way back, so I’ll open the door in front of me, looking for an exit. Unfortunately, it leads to the room where all the missing socks went.

Now that I’m pretty much finished with this little missive, I’m going to light up an experimental blend I’ve been working on, in a brand-new pipe. Now if I can just figure out where the hell I put my tamper.