A Tale of Two Syrups – Casings and Top Dressings 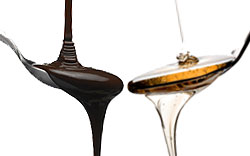 Most pipe smokers are familiar with the terms "casing" and "top dressing", but what are they, how are they used and how are they different from each other?

First, contrary to legend, most tobaccos that contain Virginia and/or Burley (which is the vast majority of blends) are cased, including some that refer to themselves as "unflavored". This, in essence, can still be true as some casings are as simple as sugared water. Casings are mostly used to lessen the negative qualities of a tobacco. If a Burley has a high pH which can lead to tongue bite, a casing (with or without a flavor) containing some sugar will help to bring the smoke back toward the acidic side, and will reduce the chance of bite. Some Virginias can be harsh or ashy, but with the right casing, that can be mitigated as well. Mostly, though, casings are not used to flavor the tobacco as much as to prepare it for other processing, much as a mild marinade is used to prepare meat for cooking and to tenderize it more than to flavor it.

Casings should be of a compatible type of flavor to the base tobacco. For example- white Burley has a nuttiness about it, and would go quite well with chocolate or molasses. Both of those are commonly used casings for Burley. The casing syrup usually has sugar in it (added to the chocolate, but actually a part of the molasses) which will help to control the higher pH of the Burley.

Casing syrups (or sauces, as they are commonly referred to) are typically water-based. The tobacco to be cased is put into a machine that somewhat resembles a large, elongated clothes dryer, and is tumbled during the process. The casing is then heated and is injected into the chamber and through the use of tumbling, steaming and vacuum pressure, the casing works its way into the leaf.

The tobacco is removed from the chamber and moved to a conveyor belt that passes through a drying unit. Heat and air movement bring the moisture level back down to a useable point. The next step will be determined by what the blend is supposed to be. If the final blend is intended to be a (mostly) unflavored blend (like a Virginia, Virginia/Perique or Latakia blend), then the base tobacco is ready to use right after coming out of the drying chamber. The tobacco will be moved to the container in which the finished blend is mixed, combined with the other components, blended and packaged. If the “unflavored” tobacco is a plug, flake or rope, then the process starts with raw leaf (whole leaf that has had the main stem (or “rib”) removed) that will be cased in the above manner. After coming out of the casing machine, leaf may go directly into the press (higher moisture is needed to get a good pressing) or may go through the drying procedure and then re-hydrated to the correct level.

If the end product is an aromatic, there’s another process that is normally used, and that is the application of a top dressing. Top dressings are flavorings that are applied at the end of manufacturing (most of the time), and are responsible for most of the pouch aroma and room note of an aromatic pipe tobacco along with the signature flavor of the blend. Top dressings are usually alcohol-based, and a quick examination of the method shows why. When the casing (water-based) is applied, the drying process will bring the tobacco back down to where it belongs, humidity-wise. But at the end of the process, the maker doesn’t want to use heat to finish the job, so by using an alcohol-based flavoring and allowing the tobacco to sit for a day or two, the carrier (the alcohol) will dissipate, or “flash off”, leaving the concentrated flavor behind with little additional moisture. 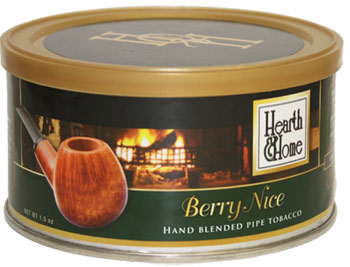 Let me illustrate by using a couple of my Hearth & Home tobaccos as examples. Our Berry Nice is an all-black Cavendish blend with a rather intense medley of berry flavors. We begin with an unflavored black Cavendish which is made by toasting Burley that has been treated with sugar water. The sugars caramelize (which is why toasted black Cavendish smells like brown sugar) and the tobacco turns dark brown to black in color. At this point, the tobacco is fairly dry, almost like corn flakes. In this case, the sugar water is the casing, and the toasted black is the result of casing and drying. The flavors (in this case, strawberry, blackberry, raspberry and currant) are mixed with a carrier and sprayed on the tobacco. The resultant mixture has the kind of moisture that one usually expects of pipe tobacco, has a rich berry aroma in the container and when smoked, and the flavor is a noticeable one, although not quite as apparent as the aroma.
Our Egg Nog uses a mildly cased Burley that is flavored with rum and vanilla, and a black Cavendish prepared in much the same way as Berry Nice, but is flavored with cinnamon and nutmeg. The two tobaccos are then combined to create an aroma and flavor similar to that of the Holiday beverage.
This brings me to my final topic– why don’t most aromatics taste like they smell? This is made a little more clear if you look at flavored cigars. When you smoke a Flavours by CAO, they taste and smell similarly, but most cherry pipe tobaccos don’t taste like cherry. Why? Because, in the case of the cigars, the flavoring is applied to the wrapper, and your tongue touches the top dressing, so you are in direct contact with the flavor. This never happens with a pipe as you are separated from the tobacco by the pipe itself. To taste the flavor, pipe tobacco has to be heavily topped, and you can only use so much top dressing before the tobacco becomes overly moist and sticky.
I hope this gives a better picture of the use of flavorings in pipe tobacco, and I’ll gladly field any further questions if you’d care to leave a comment.