A Smattering of Pipe Terminology 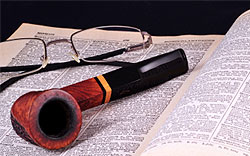 As with most hobbies, we pipe smokers have our own lexicon. Most people believe that our terminology exists to allow us to express complex concepts in shorthand, but the truth is that we use this slang to exclude those who are not among the cognoscenti. For the sake of clarity, however, I’m going to throw out some definitions of terms that one might happen upon in these pages and elsewhere.

DGT or Delayed Gratification Technique- To achieve the DGT, pack a pipe, do the charring light and tamp and then set the pipe aside for enjoyment at a later time. I’ve used this method and have gotten a number of excellent smokes as a result. Although the origins of this technique are unclear, I’m willing to bet that it started with a pipester loading up a bowl, lighting it, getting distracted and forgetting what he did with the damned pipe. 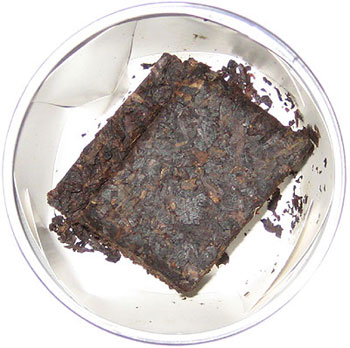 Crumble Cake– 1) A pressed tobacco using cut tobacco rather than raw leaf. It is then sliced so it can be prepared however the smoker prefers- rubbing out, chopping, folding and stuffing, etc. 2) What happens on a pipe smoker’s birthday because there are too many candles on it.

Shank– The part of the stummel (see later) that goes from the bowl to the stem with the drafthole going down the center; or, a part of an animal that the doctor says we should no longer eat; or, what happens every time I take a 5 iron out of my golf bag.

Stummel– The part of the pipe consisting of the bowl and shank, as opposed to those little German figurines that Mom or Grandma used to collect.

Button– The very end of the stem which goes into the smoker’s mouth and is where the drafthole terminates; alt.- The thing that goes flying across the room after sitting on the couch following Thanksgiving dinner.

Calabash– A pipe made by fitting an oversized meerschaum bowl into the wide end of a curved, hollowed and dried gourd, or any pipe with a similar appearance. Also, the pipe that Sherlock Holmes NEVER OWNED…DAMNIT!!! Read all 56 short stories and four novels, and you’ll never see a reference to a calabash. In a future article, I’ll write about the Great Detective and his pipes, but a calabash WON’T BE one of them.

Dublin– A pipe which has a bowl that is wider at the crest than at the bottom; sort of the inverse of a volcano; or, another great city where you can’t light up a pipe in a pub. 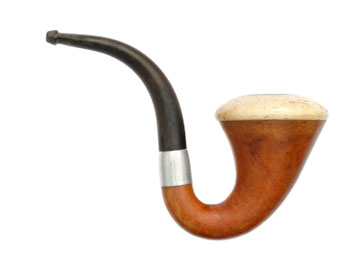 Pipe cleaners– Twisted wires with fuzz trapped between them that are meant to be run down the stem and shank to remove tars and fluids from the inside of the pipe, but usually wind up being twisted into stick men by your children or grandchildren.

Latakia (lat·uh·KEE·uh)- A black tobacco made in Syria from the base tobacco Shek-el-Bint or in Cyprus by using Smyrna by hanging the leaf in barns with open, aromatic fires which blackens the tobacco and gives it a very smoky flavor and aroma. Also another word that Brits can’t pronounce properly.

Pressure– Physical force applied to Perique and cake and flake tobaccos to make them stick together tightly by using a hydraulic press, a screwjack or a column press. Alt.- What Kevin Godbee, publisher of Pipes Magazine.com exerts upon me right before my monthly deadline.
[Editor’s Note: Ironically, Russ is always the first one to turn in his articles.]

Corncob– What’s left after removing the kernels from an ear of corn. A very specific strain of corn is grown for the Missouri Meerschaum Company, and when the corn is shelled the cobs are used to make their world-famous pipes by finishing the exterior with plaster and fitting them with a wooden shank and plastic stem. 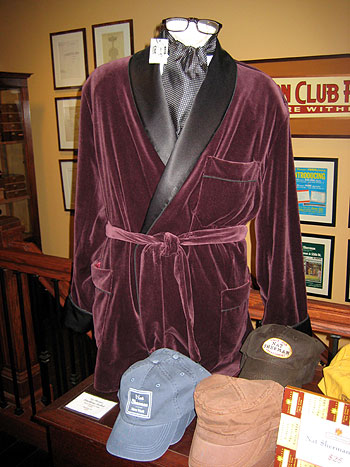 Smoking jacket– A loose fitting jacket (actually more of a cross between a robe and jacket) usually made of satin, velvet and or brocade, meant to protect the pipe smoker’s clothes from flying embers and to keep the clothes beneath it from picking up the smoky aroma; also what one winds up with while smoking a pipe in the car with the window open.

Woodstock– A shape also called a zulu, which has a slight (1/8th) bend and a Dublin-like bowl, with the bowl mildly canted forward. Another definition would be: an iconic American music festival held on a farm in New York State which every living person from the age of 59 to 70 claims to have attended.

Pipe nail– A very useful tool which looks somewhat similar to a nail, with a fairly large, flat head used for tamping lit tobacco, and the other end is usually shaped to allow it to be used as a scraping tool, but you can’t because you keep losing the freaking things.

Match– 1) A tobacco blend created to emulate another existing or extinct mixture. 2) A wooden or cardboard stick which is coated with incendiary chemicals at one end that can be struck to start it burning with the intention of using the flame to light other objects, but absolutely will not work in a wind above 1 mph.

Aging– Leaving tobacco in its tin for an extended period of time, or putting tobacco in a jar or similar container for use at a later time, to allow the flavor to improve; or, the natural process of growing older which makes us think that tobaccos we smoked when we were younger were so much better than what’s available today.