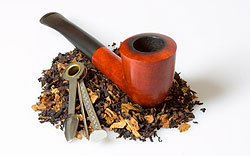 One of the reasons cigar smokers cite for not trying a pipe is because of "all the stuff you have to carry around." Well, although there’s definitely more involved in smoking a pipe, it’s really not that much more than lugging around a cigar cutter and torch lighter. To simplify the shopping list for the newbie, we’ll only address the items that are necessities, and we’ll briefly look at additional items afterward.

Pipes – How many pipes should you have? My recommendation is this – however many bowls you smoke in a pipe on a given day, let the pipe rest for that many days – if you smoke two bowls on Monday, don’t use that pipe again until Wednesday. So, the number of pipes you own should be predicated by the frequency with which you smoke. If this seems fiscally irresponsible to you, remember that a corncob (for less than $10) can deliver a very good smoke without breaking the bank, so grab a couple to allow you to let your briars dry out properly.


Tobacco – There are no "rules" when it comes to tobacco, as you will like what suits your palette. Some people find their ambrosia, and smoke nothing but that one blend, day-in and day-out. In this case, things are simple- load a pouch with your favorite and go. Other folks will almost never smoke the same blend twice in a row, in which case there will be a lot more to tote around, but it’s not necessary to carry a couple of ounces of each blend.

Pouches/Cases – Some people look upon a car’s emergency kit as a jack and a spare tire. For those people, a ziplock bag of tobacco and a pipe in the shirt pocket is sufficient. But if you’re like a father putting together an automotive emergency kit for his daughter who’s heading off to college (including the emergency stove and a three day supply of food), you’ll probably want a pipe/tobacco combo pouch which might have room for some pipe cleaners, or, if you’re more ambitious, a fishing vest with all those pockets for multiple tobacco pouches and pipes. For the well organized, a well-made pipe bag, with space for a number of pipes, pouches and all your accoutrements will be ideal (around our shop they’re often called a "murse" or man-purse). 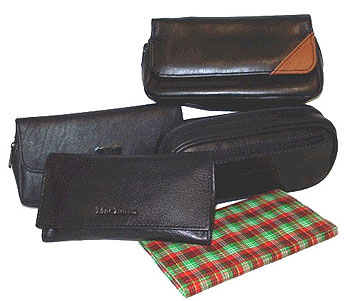 Tools – My father never went anywhere without his favorite tamper- his right index finger. Since my nose is a rather critical one, I avoid this as the smell of burning flesh doesn’t blend well with Virginia/Perique smoke, in my humble opinion. That said, you don’t need to carry around a bunch of items; a simple pipe nail or 3 piece Czech tool will do the job very well. If you do all your pipe maintenance at home, then a pipe nail (scraper at one end, tamper on the other) or plain tamper will be perfect. But if you clean on the fly, the Czech tool or a folding pipe knife/tool will be a better bet, as it includes a pick for clearing the shank, or loosening up hardened dottle. (Find pipe tools here.)

Pipe Cleaners – I usually carry a half-dozen or so regular pipe cleaners to deal with moisture issues and to run through a pipe after finishing a bowl. If you’re carrying a pipe with a larger bore (larger, more open drafthole), you might want to bring along the extra absorbent cleaners. I would leave the bristled cleaners at home, as they’re better suited for a more thorough cleaning, which you would most likely want to do in your spare time. 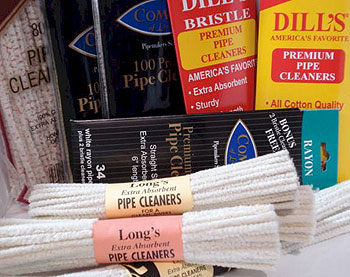 Many people who attend pipe shows come loaded for bear. They carry large, well-made and attractive leather bags with every imaginable item in stock. These people are serious and have everything they need in their kit. On the flip side was my father. He would lay out his roll-up pouch on the kitchen table (after he loaded up with tobacco) and place a few pipe cleaners across the inside of the pouch along with the stem and shank of the pipe, and then he would roll the pouch up and put it in his pocket – ready to go.

Now that I’ve covered what you need, let’s look at other items which you might want to keep around:

Polishes – A wax or oil-based polish for the wood part of the pipe is a good idea, as is a flannel or microfiber cloth for rubbing. I prefer to use an oil. When I want a complete shine-up, I prefer to use Carnauba wax and a buffer (being operated by someone who knows what they’re doing). For stems, there are mildly abrasive polishes. Some people even use toothpaste, baking soda or a Mr. Clean Magic Eraser (I’m not making this up).

Sweeteners – These are fluids used in cleaning the interior of the pipe that can reduce the sourness of a pipe that has become foul. How well they work is determined by how funky the pipe is before you use it. Liquors can also do the job.

Lighters – There are two basic types of pipe lighters- liquid fuel (Zippo or Nimrod type) and butane. Liquid fuel lighters have two major advantages versus the butane type- the fuel lasts longer between fill-ups and they are virtually windproof. Some look like regular Zippos with a different chimney and others look like an oversized nut and bolt (the Nimrod or Sportsman). The downside is that, even with the newer, low-odor fuels, there’s still a taste to the fuel that I don’t enjoy. Butane pipe lighters use a soft flame (normal orange flame, not like the pencil-point blue flame of a torch lighter) that will easily blow out in the wind, but the flame is usually angled to avoid burning yourself while lighting, and there’s minimal flavor and odor to the fuel. Some use a flint and sparkwheel to light the fuel, while others use a quartz mechanism to throw a spark. Even though they’re more of a pain, due to having to change the flint on occasion, I prefer the sparkwheel type, as they’re more reliable. Shop Pipe Lighters Here.

In the future, I’ll address some of the other things you might want to add to your wish list, but for now, this should keep your bank account from getting too full.