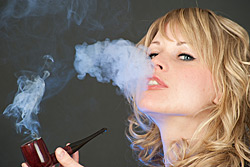 She was a cute one, this girl at the bar. She wasn’t a real beauty, but just the right amount of dimple in her cheeks made her irresistible. And irresistible was good enough for me. Long wavy blonde tresses cascading across her shoulders with a smart black and red hat pinned off to one side gave her a classy look. She wore a simple black knee length dress and had her coat draped across her shoulders.

As I stepped up to the bar next to her I saw a small, straight billiard in her left hand. Drawing on it slowly, her eyes lost to some memory, she sent small clouds of smoke over her head. On the bar in front of her sat a glass of white wine. A Chardonnay perhaps, or a Chenin Blanc. Then I noticed the bottle of Char in a bucket of ice sitting on the back bar. A cute dame, all alone, preparing to drink a whole bottle of wine and smoking a pipe. The night might not turn out too bad after all. Seeing me, the bartender walked over. "I’ll have a whiskey, please," I said.

Mac, the bartender said, "A Jameson, no doubt?"

Nodding to him I said, "You know me well, sir." As Mac walked away I turned to the lady and said, "Evening, ma’am. Forgive me for saying so, but you look like you’ve got something on your mind." Pulling my own billiard from my pocket and taking a match from the box on the bar, I lit up.

As the smoke rolled out she said, "Mmmm, Balkan. I love Balkan, but I ran out. I’m smoking an English."

A woman who knows her pipe tobacco, I like that. "My name’s Sam. Sam Barton, Private Eye. Something on your mind tonight?" She turned toward me and held out her hand. Her perfume was intriguing.

I took her hand and she said, "Jessie. And I don’t think you want to know what’s on my mind Sam. You couldn’t help me anyway." Her hand was small and her skin smooth. 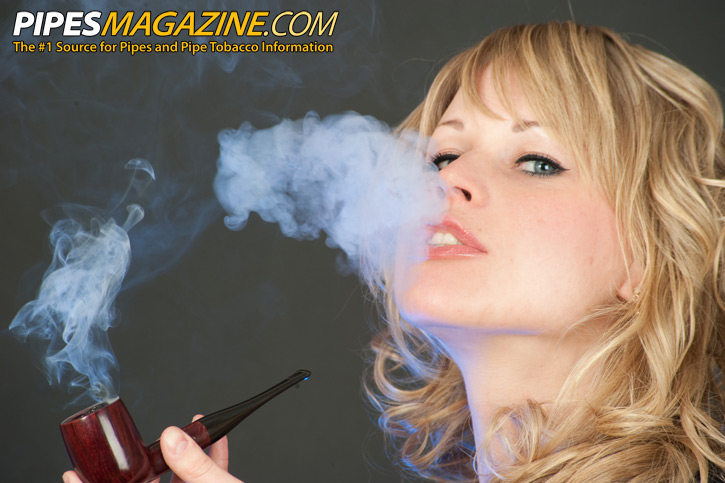 "Don’t be so sure," I said. "I’m a Private Detective, after all. Helping is what I do." Mac returned with my drink.

With a troubled look in her eyes she said, "Well maybe you could help. But I’d have to show you, rather than tell you. Walk with me to the parking lot?"

"And what’s in the parking lot?" I asked.

"My car." Tossing back my Jameson, and throwing some money on the bar I waved at Mac. He winked.

Smiling, I followed her out the door. It had rained earlier and the street lights reflected off the wet pavement as we walked. She went to the passenger side and opening the door, she leaned in. Just then I was grabbed from behind by two large men. Holding both my arms, one of them grabbed me by the neck with a large, meaty hand. "Lets go, pal," he said. As they dragged me backward I watched Jessie run around to the driver side of her car and get in. As she backed out I thought, ‘It’s a set up. She set me up.’

I twisted around and got a look at one of the thugs. He was sweating and looked like a bulldog. "Damn, man, have you always been that ugly?" I asked. As he pulled back his fist to punch me, he knocked my pipe out of my hand. It had been my grandfathers pipe and I sure didn’t want to lose it. The other thug snatched it out of the air. As Bulldog landed his fist into my mouth, I felt a tooth crack and forgot everything for a while.

Coming to, slowly, I kept my eyes shut and sat still, listening. I was tied to a chair, the air smelled musty and damp and I could hear two voices talking quietly. One of them was Bulldog. Then I smelled pipe tobacco. My pipe tobacco. I raised my head and opened my eyes to see Bulldog standing next to my old nemesis, Vinnie Colletti. "Well, Vinnie, It hasn’t been long enough since I saw you last." 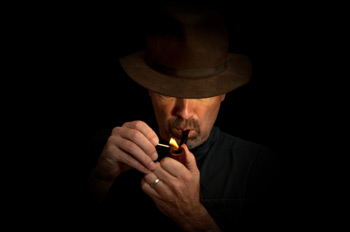 "That is Vincent, Samuel, you know that." Vinnie Colletti was a slime ball, two bit punk that I had had too many dealings with in my life. None of them good. He had a lot of irritating habits. One of which was that he never used contractions and another was that he always used a person’s proper name, never a nickname. He also had the irritating habit of still being alive. And he was smoking my pipe. Holding my billiard in his hand and failing to try to look contemplative he said, "This is fine tobacco, Samuel. You must be doing well for yourself."

"I do alright. Why are you still alive, Vinnie?"

Vinnie cleared his throat. "I will thank you to use my proper name, Samuel. The last time we met Samuel, you tried to turn me over to Federal agents. However, I had a bit of luck. Jacob and Michael here," he said, as the second thug stepped into the room, "were able to distract them long enough for me to get away. Lucky for me, but not so much for you, Samuel. It seems that now, you are, as they say, in a fix, because of my luck."

"So, who was the dame you used to set me up tonight Vinnie?" Vinnie was looking very annoyed and cleared his throat again. I was getting to him which was exactly what I was trying to do, but considering that I was tied to a chair, it might not have been the best idea.

"She is not a dame, Samuel. She is a lady. She is an associate." Vinnie seemed to think that by speaking well he would appear intelligent. As far as I could tell, he had about a third grade education.

"Well Vinnie, why don’t we just get on with this. Tell me what you have in mind," I said, boldly.

"What I have in mind, Samuel, is to have Jacob and Michael beat you senseless and then kill you. But I am enjoying this moment so we will get on with it when I choose to."

While we were talking I had been working the rope that held my hands behind the chair. It had been hastily tied and was coming loose. It looked like we were in the basement of a building. One bare bulb lit the room, there were no windows and only one door out. "Well you are probably right Samuel," Vinnie said, setting my pipe on the table next to him. "I really do not have any more to say to you. Gentleman," he said, looking at the thugs. "You may proceed."

Bulldog was rubbing the knuckles of his right hand with his left as he approached. The other guy circled around behind me and took hold of my shoulders. It appeared that Vinnie was sticking around for the show. As Bulldog stood in front of me I asked, "So, are you Jake or Mike?"

"That’s Jacob," he yelled as he wound up and punched me in the jaw.

Seeing stars and feeling pain ripple up my already sore jaw I shook my head and said, "Damn, Jake. When you hit me in the parking lot you knocked me out. You don’t seem to be doing as well this time. As he pulled back to hit me again, the door burst open, a gun was fired and a hole opened up in Jacobs thigh, spraying blood across my shirt. He grabbed for his leg and fell forward, knocking me and my chair backward into Michael. Landing on top of Mike on the floor, my almost loose hands landed in his groin and I grabbed hold and squeezed as hard as I could. His squeals of pain mixed with Jacobs yelling as I rolled over and jumped to my feet, freeing my hands. Jessie, the blonde from the bar stood with a pistol in each hand. One rested against Vinnie’s neck and the other was pointed at me.

Vinnie, seeming unperturbed said, "You are going to regret this, Jessica."

"Yeah well sue me," she said. "I just couldn’t let you do this to him." Still holding the other gun on Vinnie and motioning toward me she said, "Let’s go Sam." 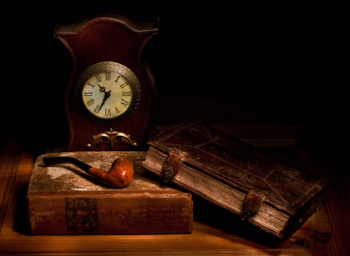 As I walked up to Vinnie I grabbed my pipe off the table. "You never should have put your lips on my pipe, Vinnie," I said while giving him a little slap on the cheek. As I headed for the door, Jessie fired her gun once more, this time hitting Vinnie in the leg as well. He howled in pain and fell to the floor. Jessie and I ran through the second room and up some stairs to a door that led to an alley.

It was raining lightly. At the end of the alley sat Jessie’s car. She leaned against the door and pulled out her pipe. I lit it for her. Sending a small cloud of smoke into the misty air she said, "You better get out of here. Someone could have reported the gunshots."

I looked around. "Not likely in this neighborhood. Who are you, anyway?"

"I’m nobody, Sam. Just nobody." She reached out and grabbing my shirt collar, pulled me in close and kissed me hard. As our lips parted she ran her tongue across her top lip. "I do have one thing to say, though."

Her perfume, mixed with her English blend was intoxicating. "And what’s that?" I whispered.

I sat up, drool running down my chin. As I wiped at my face with my sleeve I realized I had fallen asleep at the computer again. My wife, walking up to me, gave me a concerned look. "You alright?" she asked.

I thought of Jessie and my dream and my face turned red. "Yeah, I’m alright. But I’ll never know what she was going to say."