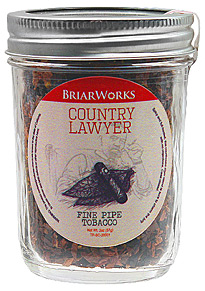 I wish to begin by stating that the Briarworks’ Country Lawyer (as well as the rest of the line) being packaged in jars is awesome. I know the twist-tins, square tins and “cat food cans” are lovely vessels that serve their purpose, but Briarworks introducing this line of tobaccos in canning-type jars is pretty cool. They’re practical, they’re reusable, and they keep tobacco quite nicely; unless you break them, that is. I use mason jars quite a bit for keeping tobacco anyway. This by itself is worthy of attention, if not it standing out on shelves, or for simply being useful. The labels have a charming sketch on each of the offerings, a round cutout that in this case reads:

“Spicy and full-bodied, this courthouse blend is sure to charm the jury with no objections. Case closed. Black Cavendish, Burley, Cigar Leaf, dark-fired Kentucky, Turkish, Virginia.”

That’s a lot of components, your Honor. Now, I must protest in advance I object to black Cavendish. It’s one of those tobaccos that gets to me most unpleasantly. Not being too melodramatic, I’ve come to find that it’s most black Cavendish, not all, that affects me this way. In short, I’m not an aromatic guy. According to Cornell &Diehl’s “The Beast,” there’s black Cavendish in there, too–and I smoked the living hell out of that stuff, contrary to my boorish waffling on its hip presentation. Country Lawyer would have to have to really win me over, jars or no jars. 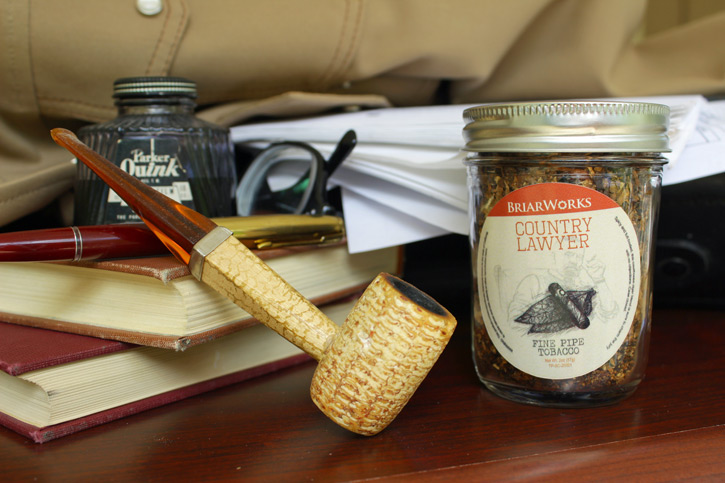 Opening the jar, Country Lawyer lightly smells reminiscent of kiwi soda pop–which concerned me. Is this an aromatic, or not? I imagined actual country lawyers would probably smell like Marsh Wheeling cigars, old books, dusty roads and maybe lemon Pledge. It’s a very spongy tobacco, light but the leaf chunks themselves are thick. I packed a few different pipes smoking this over the last month, from cobs to clean briars, and I found any vessel to appeal to this leaf.

When first smoked, Country Lawyer is a tad sweet on the nose. There are hints of a caramel-hazelnut yet it is somewhat tart and dry on the tongue, it has a chicken-like meatiness. A fairly easy to light tobacco, but it has a thinner smoke than I’m used to. On the tongue, it presents a little spice and some dark fired smokiness once in a while, but nothing overpowering–mostly a suggestion. I’m a big fan of things with cigar leaf included, but it has to be done the right way. Too much, and it becomes rowdy; too little, and it gets lost. In the right amounts, it is noticeable as body and binds the other flavors. In the case of Country Lawyer, I’ll try keep the courtroom quips to a minimum–the cigar leaf wasn’t present during questioning, which was disappointing. Packing a bowl of straight Virginia usually makes for a pretty dense, lengthy smoke, but the sponginess of Country Lawyer (presumably from the burley) filled up a lot of real estate pretty quickly. A full, packed bowl of this stuff I could cruise through in about thirty minutes rather than an hour or more. Nicotine is ho-hum to pushing moderate. 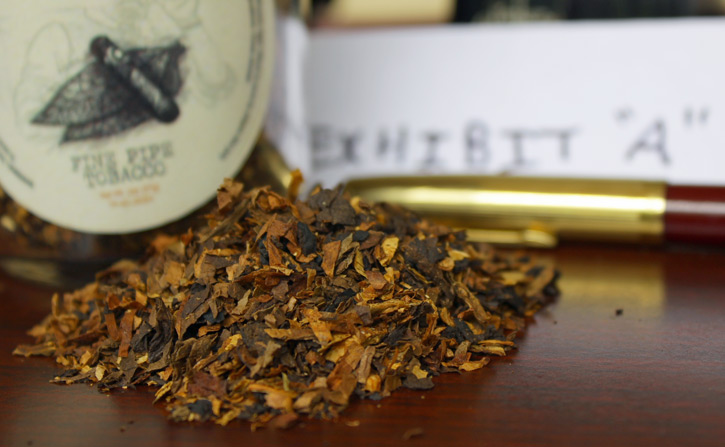 I swear on oath, that Country Lawyer sort of reminds me of a higher-quality, cleaner-burning Carter Hall–which is probably why I kept smoking it. Carter Hall brings back all sorts of good memories of my early pipe smoking. There’s hints of sweet both on the tongue and the nose, which aren’t particularly cloying, but it could present a problem to strict non-aromatic guys (as for me, I don’t mind a challenge). Overall, this tobacco is a component-heavy for being somewhat one-dimensional; a curious non-aromatic trying to convince me it wouldn’t mind being an aromatic. For me, it’s a stretch to call Country Lawyer “full bodied.” It toes the line being pleasant yet distracting, as I tried many times in vain to truly find each of the components and flavor ideas as they were presented. I believe the tobacco could have stood well enough on its own without Cavendish or additional sweetness or topping trying and help it out, and I would have liked a little more cigar leaf especially since the label pictures a cigar so prominently.

In a world where sales matters, I come across many products (not just tobacco) trying to appeal to the broadest audience possible. At times I remember this cliché: “You cannot make all of the people happy all of the time.” There’s a fine balance in giving people what they want, staying true to yourself, and not being too derivative of something else that’s out there. Country Lawyer seems to have not decided if it’s a real cross-examining maverick or just another crossover tobacco.

Members of the jury, I have shown and presented Country Lawyer to be a simple, easy, passable smoke, one I didn’t mind but didn’t love, and a tobacco lacking a little originality in flavor and performance. It is a smoke that I would very much suggest to those looking to post bail on an aromatic misdemeanor, or for those looking for a break from a heavier sentence of bolder leaf.