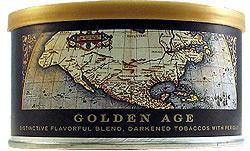 Tin Notes: Distinctive flavourful blend, darkened tobaccos with Perique. From Altadis Website: Perfect for Fans of Elizabethan. We can thank the Golden Age of Exploration for introducing the Old World to Perique. Perique lovers everywhere will marvel at this distinctively flavoured mixture combined with Turkish, Burley, Black Cavendish and Virginia.

When I first approached the Sutliff Private Stock blends, I expected to find nothing but heavily cased, flavoured aromatics. Of course, I was pleasantly surprised to discover that nothing could be further from the truth – while applied flavours do play a large role in many of the Sutliff blends, there are also offerings for those who seek the more "traditional" tobaccos; albeit they are produced with propylene glycol as a humectant.

A blend of Virginias, spiked with Perique and Cavendish, Golden Age is one such offering. Harkening back to the days of the British Commonwealth Tobacco Act, this blend highlights the natural flavours of the constituent tobaccos. As with many tobaccos touted to be a replacement for a blend long-lost, many have stated displeasure with this blend simply for not being an exact replica (something that I maintain is impossible to produce) – however, be that as it may, this is a very fine blend when taken in it’s own right, and I must say I do find it reminiscent of the Deluxe Navy Rolls and Flake offered under the Dunhill logo today.

As with all the Sutliff Private Stock blends, the tin art is spectacular. Golden Age features a recreation of an early Spanish map of North America over the familiar black background and golden lettering. The tin itself is slightly larger than the usual pop-top offerings (ala McClelland, C&D, GL Pease amongst others), and does only contain 1.5oz of tobacco, likely well settled during shipping.

The tobacco ships slightly on the damp side for my liking, however, it can be smoked straight out of the tin with little to no trouble. Personally, however, I would recommend allowing it to air for at least half-an-hour or so as this seems to "round out" the flavour profile (and allows for a cooler, dryer smoke). Packing is a cinch, with this tobacco responding well to pretty much any method and pipe that I tried. I did find the strongest flavour profiles came through when smoked in a wide chamber, using the "Three-Stage" packing method.

A coarse-cut ribbon of tans, chocolate browns, and black leaf. The tin-note holds the distinctive liquor-like aroma of Perique, propped up by muted earthy, almost fruity notes. There is a some indication of heavily stoved and pressed Virginias, as belied by the slightest hint of "ketchup", which continues to develop as the tobacco ages in an oxygen rich environment.

A pre-light draw brings a distinct note of raisin, supported by grassy and brown-sugar sweetness; which does not linger on the palate. Charring light reveals the wonderful subtle grassy sweetness of the bright Virginias underpinned with a rich caramel and honey flavour. The smoke takes on a thick quality almost immediately, and rarely takes more than a single match to char. With true light, the grassy-sweet Virginias continue to dominate, with the honey sweet Cavendish(?) playing a strong second fiddle. Fleeting notes of raisin and fig can be detected on the back of the palate, while an almost brown-butter and rum nuance slowly develop as the bowl progresses.

As the bowl progresses through the half-way point, the brown-butter and raisin flavour continues to grow bolder, while the sweeter tones meld into a wonderful, earthy flavour that is reminiscent of both toasted marshmallow and honey-dew. The fig like flavours of the Perique continue to add depth and character, yet I don’t detect the peppery note that I often associate with the fermented leaf; due, I believe to the leaf being used extremely sparingly.

The bottom third of the bowl brings deep and rich earthy, musty notes of soil to the forefront of the flavour profile while maintaining the muted, grassy sweetness of the top portions of the bowl. The brown-butter flavour also continues to spring forth, while the raisin like notes meld into something closer to currant. Deep, rich, earthy notes of leather and wet leaves begin to take shape, albeit never growing dominant. The figgy notes of Perique continue to provide complexity deep in the background, without ever growing overly bold as I often find happens with Virginia / Perique blends.

The room-note of this tobacco proves to be pleasant for most, both smokers and non. Sweet, hay-like aromas dominate while nuances of leather, butter and sugar waft delicately throughout. At times, an almost raisin like note pops up, although this is very fleeting. If this blend is smoked quickly, a slightly ammonic aroma rears it’s ugly head; although this can be circumvented and does not seem to transfer strongly into the flavour profile (it just doesn’t smell all that great). The latent smoke smell left on facial hair and clothing is not terrible, containing the same nuances found in the room-note; however my non-smoking wife did note that after awhile, it simply smelled like I had been smoking cigarettes.

The "Delayed Gratification Technique" yields an interesting change in the flavour profile, with the sweeter notes growing more muted whilst the dark, rich earthy notes grow more prevalent. The smoke takes on an even thicker and creamier mouth-feel; and even seems to grow more satisfying.

The burning qualities of this tobacco, like most of the Sutliff Private Stock line, are excellent. Little attention is required from charring-light through heel, and negligible dottle is left behind. This blend can be pushed fairly hard before it bites back, but when it does, it does so with a vengeance. In both bowls that I took to the point of biting, I noticed a marked change just prior to the discomfort setting in; whereby the flavour profile grows markedly acrid and ammonic, with an extremely steamy feel to the smoke stream. If one smokes this blend directly out of the tin, evidence of the humectant can be found both in the ash, and often in the amount of dottle remaining.

I find this blend meets my nicotine addled needs – which is to say that I can avoid cigarettes by smoking this blend, however if you’re looking for a nicotine induced bliss, look elsewhere. I should also note that when it comes to Perique, I turn into a light-weight; something about the fermented leaf forces my nicotine receptors into overdrive. Although this blend seemingly contains a very small amount of Perique, it could very well have skewed my perception of the nicotine level.

Despite the fact that we have grown few and far between, and are often treated as social pariahs by our peers, many a pipe-smoker has stated that we are currently experiencing a "Golden Age" for pipe-tobacco. Indeed, with literally hundreds of blends, from dozens of blenders encompassing all manner of flavour and aroma, this would appear to be an apt statement.

And yet, even with all the choices offered to us in this "Golden Age", I often find myself returning to the simpler flavours. It is in this vein that I find Sutliff Private Stock Golden Age; mild, yet flavourful; simple, yet complex; and most importantly satisfying, but not overbearing.

Sweetened with a kiss of Cavendish, and seasoned with the lightest touch of Perique, this blend is simple enough to entice the new pipe-smoker, yet complex enough to satisfy the experienced. I do note that as per the internet description, this blend reputedly contains "Turkish"; which to me reads as "Oriental" varietals of tobacco; and while I won’t rule out their existence, I can also not confirm that they are in fact a component of this blend. However, as a wonderful introduction into the world of "natural" flavourings for the aromatic smoker, to Perique for the un-initiated, or as a simple change of pace, this blend should find a home in most cellars. 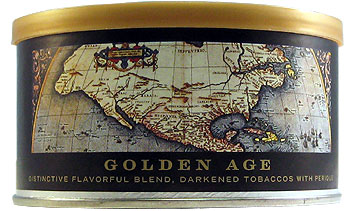