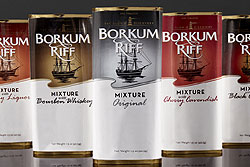 The Borkum Riff line of tobaccos has a pedigree that dates back to the early 1960s. It was formerly produced in the Mac Baren factory on an exclusive production line for Swedish Match. Now it is produced in-house at STG’s Orlik factory after the two companies merged in October 2010. Burley-forward Cavendish blends, they still enjoy prominence in the mass-market, or "OTC", pipe tobacco category, and with good reason. Five blends were sampled for this review, and all of them offered smooth and consistent smoking, genuine tobacco flavor, and varied Danish-style aromatic casings that distinguished them well.

From the Editor: With the change in production of Borkum Riff now being produced in Scandinavian Tobacco Group’s own Orlik factory, a few items are note-worthy.

The flagship of the line is Borkum Riff Mixture Original. (introduced in 1982) The Danish style plays well here, with its delicate vanilla casing evidenced quite softly on the palate and room note. In the pouch, it exhibits a pleasing mottle of Virginia and Burley, predominantly dark leaf interspersed with light blonde streaks, and exudes a subdued aroma of vanilla bean amongst the earthier tobacco scent. A bit moist to the touch, it fares better with a short drying time, and keeps quite well in the pouch for extended periods. Taking to the light quite easily, it starts off with a short sweet burst of familiar Virginia Cavendish brightness that quickly settles into an almost metronomic quality of tempo—smooth, light, and steady as a ship in a cool breeze on calm water. It certainly avoids cloying sweetness and a too-heavy hand on humectants, and delivers exactly what it promises—a soft texture with the subtle enhancement of vanilla, burning dryly and easily to the bottom of repeated bowls. Available in a 7-ounce tub or in 1.5-ounce pouches, this is one of the easiest all-day smokes out there, with enough nicotine to refresh and enough flavor to keep it interesting.

Pouch Description: The original recipe consists of 60% Black Cavendish from The Philippines and Africa, mixed with 40% Virginia from Brazil, India and Africa.

Borkum Riff’s most popular blend is the Bourbon Whiskey, introduced in April of 1962, and aimed at the American market’s palate. Another Virginia-burley Cavendish blend, it shows an even 50/50 mix of light and dark ribbon with a faint aroma that is indeed evocative of our American whiskey. Like the Original blend there is a brief burst of sweetness after the light, which settles into a slightly more complex variety of flavor. The Virginias come through a little more with this one, a little sharper, and serve to highlight the bass notes well for some contrast. Throughout the bowl, the flavor of tobacco is mild and smooth, and the whiskey top-note an ever-present solo voice weaving through. Some care must be exercised when chasing this flavor, as excessive puffing may provoke the tobacco’s slight tendency to nip. Not surprisingly, it excels in a Missouri Meerschaum cob, where the sweet corn amplifies perfectly the liquor’s flavor. Bourbon Whiskey is also available both as 7-ounce and 1.5-ounce packages.

Pouch Description: The Bourbon Whiskey recipe consists of 35% Black Cavendish from Africa, Europe and The Philippines, mixed with 65% Virginia from Brazil and Africa, and as a final treat, genuine Kentucky Bourbon Whiskey is added.

Moving a notch up the scale on strength and body, the Black Cavendish (introduced in 1975) offers a richer and darker smoke with a surprising complexity, owing to the addition of dark-fired Kentucky burley to the blend. The dark brown packaging reflects the darker leaf within, interspersed with only occasional streaks of brighter lemon Virginia, and offers the aroma of nougat and nuts very characteristic of heavier Cavendish. Casked and fermented for an extended period, the earthier flavor is more prominent and plays well with the sweetness of the lighter leaf. It perhaps demands a bit more attention than the previous blends, and with proper consideration it rewards with a great deal of depth in which to let one’s palate wander, touching on woody low notes, a musty vegetal sweetness of truffle, a drop of honey here and there, and sweet tea high notes. Its performance was magnified in a century-old clay, and paired exceptionally well to a Darjeeling first flush tea and a viewing of John Huston’s Moby Dick with its brilliant Philip Sainton score.

MORE READING  One Bourbon, One Scotch, and One Beer

Flavor: A hint of prune and plum.

Next up is the Cherry Cavendish in its deep red packet, (introduced in 1979) also blended with dark-fired Kentucky burley and aged in casks. The cherry and vanilla aroma is sweet, certainly, but just refrains from cloying, and is a dead ringer for a Cella’s chocolate-covered cherry. Like the Black Cavendish, it is a predominantly dark blend with only a sprinkling of lighter leaf, and of an equally nuanced complexion when smoked. While not as strong as many cherry-topped blends, it is certainly an aromatic that will ghost a pipe, so does best in dedicated instruments of narrow chamber. It definitely delivers on flavor, both in its casing and its high-quality base components. The Kentucky and Cavendish are rich and ripe with chocolaty, nutty overtones that complement the dark cherry dressing, making for an excellent dessert pipe to be enjoyed at leisure with a cup of coffee.

Pouch Description: The Cherry Cavendish recipe consists of 50% Black Cavendish from Africa and The Philippines, mixed with 50% Virginia from Brazil, Argentina and India. On top of that, sweet cherry taste is added.

Noticeably lighter in body and casing is the Cherry Liquor blend (introduced in 1972). It is perhaps the most prominent in Virginia Cavendish, with much more bright ribbon and appreciably lower nicotine content. The cherry topping is milder and quite distinct from the Cherry Cavendish blend, strongly reminiscent of a hard candy flavor. After some time in the pouch, it faded a bit and became almost an afterthought in the flavor profile, though not in the room note. On par with the Original Blend, it smoked easily and with an even tempo that allowed for repeated bowls throughout the day, with no tendency to bite at all, while the Cherry Cavendish had a bit more inclination to tire the mouth in that regard.

Pouch Description: The Cherry Liquor recipe consists of 40% Black Cavendish from Africa, Europe and The Philippines, mixed with 60% Virginia from Brazil, Africa and Europe. On top of that, cherry liquor is added.

Scandinavian Tobacco Group is delivering well on its mission to preserve, maintain and even improve on the blends under its charge, and this is demonstrated admirably with the Borkum Riff marque. Scouring through older reviews of the blends, it is apparent that they are now avoiding the pitfalls that tend to give aromatics a tarnished reputation—the leaf is of excellent quality, with very little stem or clumping; the casings and toppings are expertly joined with, but very subservient to, the taste of the tobaccos; and the overall presentation and consistent quality of smoking characteristics make for a thoroughly enjoyable addition to the rotation. Personally, I found them to be superior smokes in a well-used cob for when I’m behind the wheel. They all present ready-to-load straight out of the pouch once they’ve had a little time to air out, smooth and dry to smoke to the bottom with only a few relights, and while uncomplicated enough to allow my attentions to be focused elsewhere, they all delivered much more than a simple nicotine fix, with enough flavor and variety to maintain interest and enjoyment over repeated, all-day smoking. Having worked my way through five blends—nearly a pound of tobacco—in under a month, I can confidently recommend them all as solid performers in their category of mass-market aromatics. 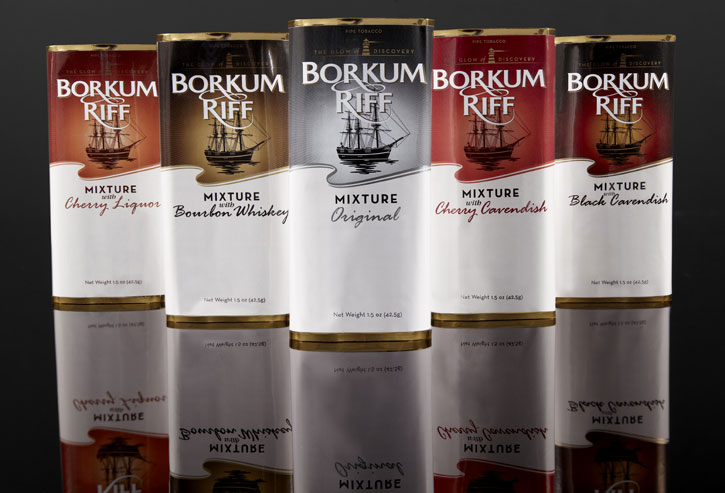