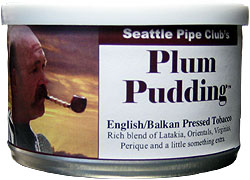 Tin Notes: English/Balkan Pressed Tobacco Rich blend of Latakia, Orientals, Virginias, Perique, and a little something extra. Say Hello to Plum Pudding! Ahh, what an exquisite tobacco! This Seattle Pipe Club Blend was created by our own blending guru, Joe Lankford. Plum Pudding is simply a legend in our Club. Many members say it is their perfect tobacco. Delicious, smoky, spicy and positively addictive. Problem was, Joe nearly wore himself out blending so many special requests. So our friends at PipesandCigars.com are blending the precious mixture to Joe’s exacting specifications. Now our Club treasure is available to the world – in limited quantities. We hope you enjoy it as much as we do. Available in 2oz tins and bulk by the ounce.

When I think of Plum Pudding, I am immediately taken to the holidays. Not the holidays as they are celebrated now, however, but the holidays of a simpler time, a time gone past. I think of the family gathering in the kitchen on "Stirring Sunday" to add trinkets to the pudding and make their wish. I think of sacs of pudding hanging in the cellar, with rich odours of spices emanating from the bags. 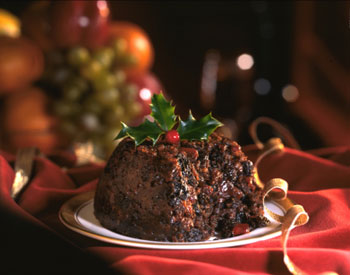 My mind conjures up images of Christmas morning, with the rich pine smell wafting gently from the tree. Images of excited children, and exhausted parents. Wisps of wood smoke slip from the fireplace. Fleeting remembrances of holiday feasts dance across my subconscious. The family in their Sunday best, gathering around the table for an evening of laughter and merriment; capped with a rich, spicy Plum Pudding. The oohs and ahhs of the children as the pudding is flamed with brandy. I hated that damned pudding.

But yet, the pudding is a symbol of the proper English Christmas, full of traditions instilled by forefathers long gone.

But what does Seattle have to do with an English Christmas, you ask? Not a whole lot, I will grant you; with the exception of climate, the Pacific Northwest is about as far from England as you can get (well, outside of Victoria). But at the same time, the fine fellows at the Seattle Pipe Club have created a proper English blend modeled after the venerable, rock hard pudding; and unlike its namesake, this blend is very pleasant, and destined for more than re-gifting, use as a doorstop or beating the snot out of your little brother with.

Presented as a hard crumble cake which reputedly resembles a flamed Plum Pudding, my samples (tin and bulk – 2011 offerings) both arrived appearing more as a rough ribbon with small chunks of cake remaining; interspersed with tobacco dust (anyone familiar with C&D Cakes will know exactly of what I speak). I should note that my tinned sample was provided to me via a friend, rather than direct from a B&M; it is conceivable that they abused the block prior to shipping. I did not notice a discernable difference between tinned and bulk, outside of moisture content, with the bulk was slightly drier and more beat-up upon delivery.

A closer look at the cake reveals a high concentration of black leaf, interspersed with dark browns, coppery reds, and golden tans, all coated with a fine black dust.

I find this tobacco responds the best when bone dry, and as such, I like to let it air for a couple of hours before packing. I found this blend handled well no matter the chamber shape; and took to meerschaum like a duck to water. The prevailing tin note in this blend is the rich smokiness of Latakia, supported by earthy undertones akin to wet-leaves. As the blend dries, the peatyness really blossoms, masking the other leaf in the blend.

The pre-light draw brings the strong peat-rich, camphor and tire-fire flavour that is consistent with Latakia leaf, underpinned by a sweet-spiciness from the Oriental leaf. The charring light would lead one to believe that this blend is a stout Latakia bomb, full of rich flavours of cedar smoke and peaty-camphor – not so. In my opinion, this is caused by the dust used as kindling on top of the bowl; but I digress. The rich Latakia flavours are marked with a salty-tanginess and hint of sugary-sweetness; not unlike plain salt-water taffy.

Through the first third of the bowl, this blend brings a salty, slightly earthy, musty flavour, with hints of leather, sweet hay and caramelized brown-sugar. The Latakia leaf quickly settles down from the prominence shown on the false light, at times becoming almost undetectable, while at others coming to the forefront.

As the bowl progresses through the mid-way point, the peat-camphor flavour of the Latakia leaf takes a back seat – in fact, it becomes almost underwhelming. The herbal flavours of the Oriental leaf take on a bold role, while the earthy notes meld into a nutty, milk-chocolate like sweetness. A slight peppery tingle is barely discernable on the back of the palate and tongue.

As one approaches the heel of the bowl, the Oriental leaf remains at the forefront, with the rich-cedar smoke and peat flavours of the Latakia leaf once again return, albeit in a supporting role. The saltiness noted on the charring light also returns, while the earthy notes meld into a rich fig-like flavour, supporting the rich, chocolate and nut flavours wonderfully.

This blend takes fairly well to the delayed gratification technique, with very little bitterness to speak of after two or three puffs.

The room-note, while pleasant enough to me, probably will not win you any friends. The rich smoky peat notes prevail, interspersed with hints of leather and wet-leaf. I would rate this a 4/10 on the wife-scale; putting it about average for "Light/Medium Balkan" blends.
The blend burns "cool", and can be pushed fairly hard without biting, and burns well, requiring minimal attention. The nicotine level in this blend is moderate; it (probably) won’t put anyone over the top, but it will satisfy the cigarette smoker.

To summarize, this is a pleasant blend with a rich flavour profile. Mild enough for all day smoking, yet rich enough to satisfy; this blend works. A great introduction into the world of Latakia blends, and something I will definitely keep on hand for a change of pace from the usual. A welcome addition to the cellar. I recommend it.

Give us your review, or read others reviews – Seattle Pipe Club Plum Pudding Tobacco Reviews 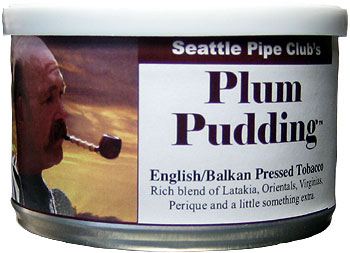