Seattle Pipe Club: Luxury Blends Unlike Any Other (Part 2) 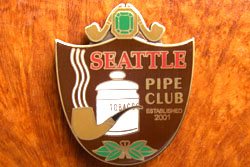 Welcome to Part Two of my look at the original eight Seattle Pipe Club blends. In Part One, I discussed how the club was founded, and how master blender Joe Lankford became involved in creating home made mixtures that eventually led to the luxury blends for which he and the club became famous. 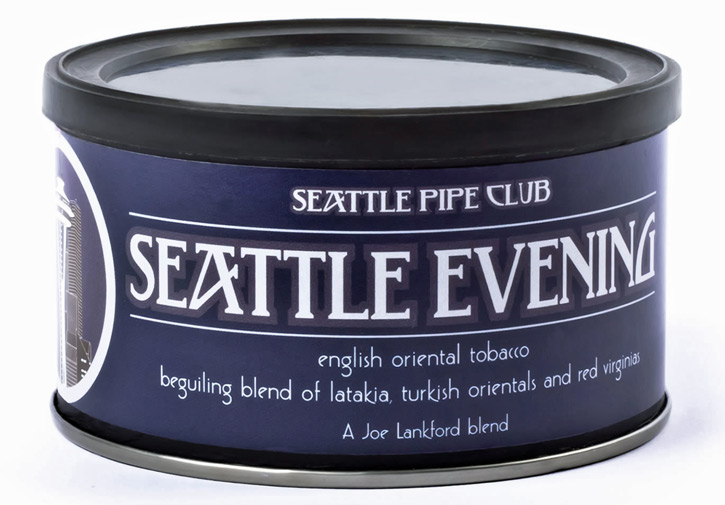 During one of the early annual club dinners, it occurred to Joe that the club should have a special "dinner blend" for the attendees. That idea resulted in Joe creating Seattle Evening. Despite the blend being comprised of 40% Cyprian Latakia, Joe developed a mixture where that particular varietal would not dominate the overall flavor. This goal led him to construct Seattle Evening with a lighter touch in the field of SPC English tobaccos while retaining enough character to continually hold the interest of the smoker.

The lead varietal in Seattle Evening is Cyprian Latakia, which offers a mildly smoky, musty, woody sweetness. The lightly tangy dark fruity, earthy red Virginias also sport a few grass and citrus notes as they form the base of the blend. The Turkish/Orientals are woody, dry and lightly buttery sweet with a touch of spice and a hint of savoriness in a secondary role. It’s mild on the nicotine. The strength level is in the center of mild to medium, while the taste falls just short of the medium threshold. No chance of bite or harshness present. It burns at a moderate pace; cool and clean with a well balanced, consistent flavor from top to bottom. It leaves little moisture in the bowl, and requires few relights. You will experience a pleasant after taste, and the room note lacks the pungency usually associated with Latakia-forward products. An all day smoke that is designed for those who want a tasty English mixture with a lighter touch than others in the SPC series. It also serves well as an entry level blend to the genre. 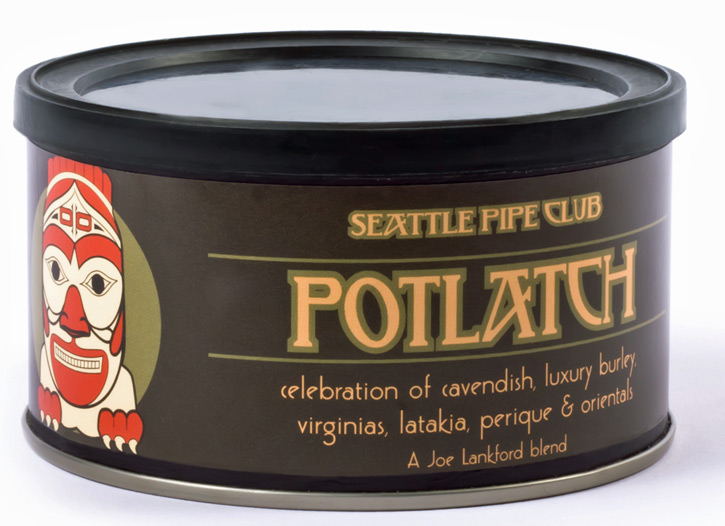 Potlatch: JimInks Rating 4 out of 4 stars

Potlatch is an entertaining medley of choice tobaccos that include a higher proportion of burley than Joe had ever used in blending. The challenge of getting the most out of this leaf proved elusive for a while. Joe said "I had tried burleys for a long time and didn’t like them. They were either too harsh or too heavily cased. I wanted a plain burley flavor. Eventually, I obtained a batch that suited my needs, and experimentation led to creating Potlatch."

The nutty, earthy, lightly molasses sweet burley takes a small lead with able support from the other ingredients. The floral, dry, spicy, woody, earthy, lightly sweet and lightly more sour Turkish and Orientals are an ever present condiment that play above that threshold due to their richness. The smoky, woody, musty sweet Cyprian Latakia is a secondary player at best. Tangy, vinegary ripe dark fruit and earth from the red Virginia vies with the Latakia for attention. The citrusy, grassy bright Virginia lightly whispers to the taste buds. The mostly plummy, raisiny, Acadian perique offers a pinch of spice deep in the background. The brown sugar from the unsweetened black cavendish adds a smoothing sweetness. The strength level is medium, while the taste is a step past that mark. The nic-hit is just past the center of mild to medium. It won’t bite or get harsh, but does have an occasional hint of a rough edge. Burns cool and clean at a reasonable pace with a deep, though at times, lightly inconsistent flavor due to the complex interplay of the burley, Turkish and Orientals. It easily burns to ash, and doesn’t need many relights. It leaves virtually no moisture in the bowl. It has a pleasantly lingering, sweet campfire after taste. While not quite an all day smoke, it’s certainly repeatable, and veteran smokers may consider this to be a constant companion during their waking hours. 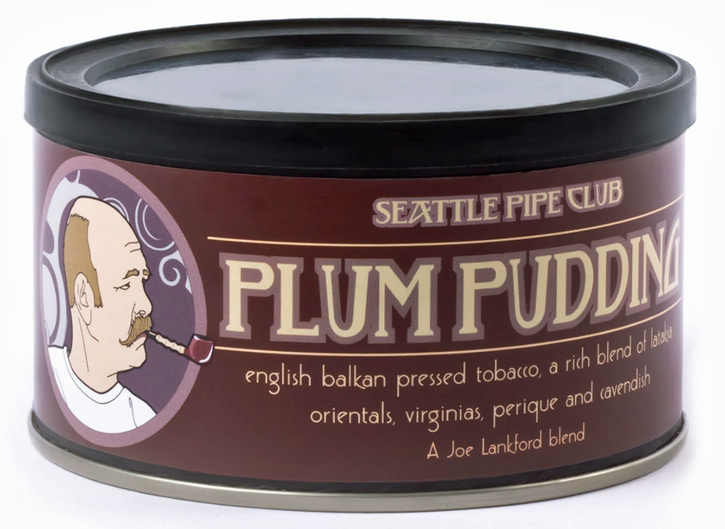 Joe’s close friend and fellow SPC member Matt Guss was the original inspiration for Plum Pudding. Recently, Joe told me that "Matt likes Latakia, so I made it for him. I took the first batch to dinner one night where it was so well received by all the members that we immediately decided to market it. I was thrilled when Matt told me it was his favorite of all my blends."

In Plum Pudding, the Cyprian Latakia is smoky, woodsy, musty sweet, and is a team player with the Orientals and Virginia even though it is the lead component. The Virginias have a little grass and light citrus along with a bit of earth and some tangy, piquant dark fruit with a touch of "barbecue". The spicy, raisin and figgy perique is a minor player that lurks in the background. The unsweetened black cavendish adds some smoothing brown sugar, and seems at times to hold the overall flavor together. A pinch or two of gold cavendish barely adds any toast. The nic-hit is just past the mild level. The amount of strength leans more toward medium than it does mild. The taste does reach the medium mark. It won’t bite or get harsh, but does sport a slight rough edge here and there. The expert blending provides a consistent flavor from first draw to final puff. If you break it up a little, but leave it in small chunks or layers, you’ll get more of what you’re supposed to get in addition to a slow, cool burn, though you’ll have a fair amount of relights. Regardless of how you prepare it, there won’t be much dampness in the bowl. The pleasant, smoky after taste will linger a little, and stronger room note lasts a little longer. I would not classify this as an all day smoke, but this is a blend you can repeat with ease. 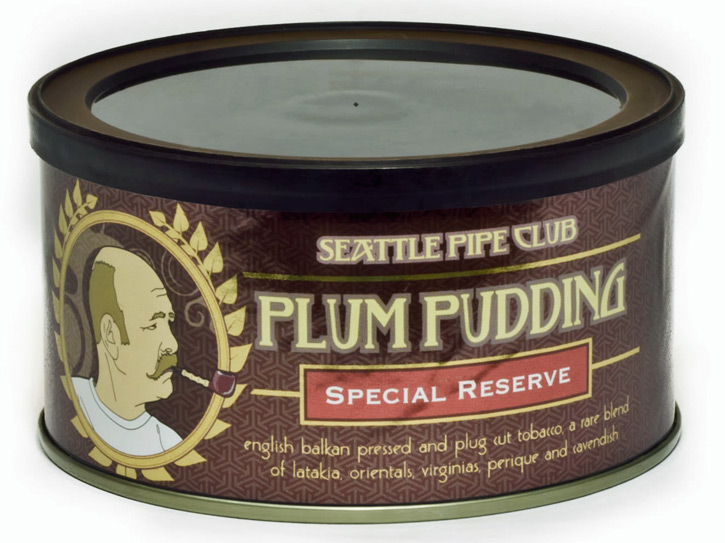 In 2016, Joe got his hands on some rare sun cured Orientals and blended them in with the other Orientals to create a lightly fuller, more nuanced version of Plum Pudding. "I had an opportunity to see what affect those rare tobaccos would do for a blend. As Plum Pudding is one of our most popular blends, I thought they would add another dimension to create something special." And so Plum Pudding Special Reserve was born.

Open the tin and you’ll find an old fashioned 4oz plug cut kake. Though it is true that the smoky, woody, musty sweet Cyprian Latakia is the most important component, the other constituent tobaccos synergistically combine to form a cohesive, multi-dimensional flavor. The black stoved and red Virginias are also upgraded leaf especially for this Reserve blend. They offer earth and a little grass, fermented tangy ripe, stewed dark fruit and citrus with a light barbecue essence. The sun cured Orientals not present in the original Plum Pudding add a bit more sweetness, depth and dimension to the complexity. The dry, buttery sweet and sour, wood and smoke from the Orientals also sport a pinch of salt in the background, a little less so than they do in the other version due to the upgraded Turkish leaf. There is a continual undercurrent of spice, raisins and figs from the perique, though the spice is lightly more obvious. The unsweetened black cavendish provides a brown sugary smoothness in a small support role. The nicotine status is a shade closer to medium than it is to mild. The strength and taste positions are medium. It won’t bite, and any chance of harshness is tamed by the black cavendish. The pressed kake plug is easily broken apart. The tobacco is a little moist, but I did not feel the need to dry it. I recommend not totally rubbing it out. I broke off small pieces and dropped them into the bowl. It burns a bit slow, cool and clean with a very consistent and intricate, deeply rich and creamy smooth, smoky, woody sweet taste from start to finish. It requires some relights, and leaves just a little moisture in the bowl. It sports a very pleasant, lingering after taste with a stronger room note. It’s not quite an all day smoke, but is certainly repeatable.

Aside from the previously noted differences from the original Plum Pudding, Special Reserve is a little sweeter, deeper, smoother and richer in flavor, with nearly the same strength and taste levels. Its sweetness has a mildly more fermented character, and the "barbecue" note is a tad more pronounced. Well balanced, you’ll notice virtually all of the inherent aspects of the tobaccos in every moment of the experience.

Initial reactions to the blends were very positive and sales grew to make SPC blends some of best selling pipe tobaccos in America. People quickly took to the internet to discuss and praise the blends on pipe forums and TobaccoReviews.com as well. "It completely surprised me", Joe remarked. "I knew my fellow club members enjoyed the blends, but the depth of mass market support was something I had not anticipated. Forum discussions, YouTube videos… it was an amazing thing to see."

One of the most fascinating things about Joe Lankford is his creation process. Joe spends a lot of time thinking about what the next blend ought to be, and what tobaccos will work best together. Once he answers those questions to his satisfaction, Joe creates the blend. Sounds simple, doesn’t it? It isn’t. Unlike most blenders, none of the Seattle Pipe Club blends went through a long development process. All of them were completed in one try! No tweaking, nor redos. They either make the cut or they don’t. Their sustained popularity in the marketplace is ample evidence that they do indeed "make the cut".

Joe smokes up to ten bowls of pipe tobacco daily. He continually invents new blends for his own amusement, and as he says "Occasionally, I use the club members as guinea pigs." To date, over a hundred of Joe’s private mixtures have been shared with his fellow SPC members. When I asked him what blend he was proudest of, Joe replied, "Mississippi River, because it was the first decent blend I made, and it’s my go-to smoke. I’m pleased that my blends continue to have a wide appeal and fan support. I feel like my efforts were validated".

When I asked Seattle Pipe Club leader Jim Westmoreland about Joe’s legacy, he said "Joe’s ability to blend tobacco so that specific leaf characteristics or the interplay of leaf combinations are featured clearly on the palate in a way that is unmatched. Each of his blends are master examples of the ‘Joe Lankford’ style". Jim further states that, "Beyond the obvious financial benefits, the blends have added awareness and prestige to our club. When I travel and interact with other pipers, and I state that I am affiliated with SPC, the first question is always ‘Do I know Joe Lankford?’ Joe is one of the kindest, sweetest people I’ve ever met. At pipe shows, there are three things from Seattle that everybody knows: Boeing, Microsoft, and Seattle Pipe Club tobacco." 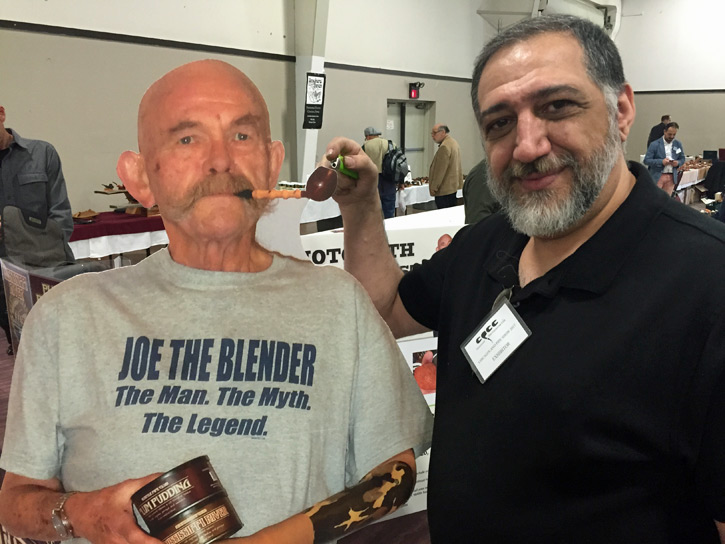