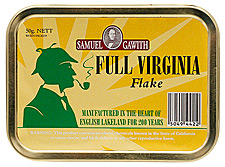 What do you get when you mix a beautiful day with a tin of a nine-years-old pipe aged tobacco? Contemplation. You get contemplation.

Do you remember when Sam Gawith Full Virginia Flake was a thing? Remember when it was
the thing? Hell, for that matter is it still a thing? When I got seriously into pipes and pipe tobacco, roughly seven years ago, there was a gold rush for small square, brass tins with a golden label. Forum acronyms like “FVF” and “TAD” were thrown around in threads where guys were either praised or chastised for divulging when a particular website had hard-to-get tobacco in stock. Everyone, it seemed, was jumping on the hype train of unobtainium, joining the herd of hear-say, and loading up on the current must-have, tobacco darling. Nowadays, though, it seems the supply has met the demand, or quite simply the demand has dwindled. We now have limited releases of small-batch tobacco where even as recently as when I started really getting into the pipe, folks had to deal with a shortage and that was exciting enough for them…

…April 2008. That’s what this tin of Samuel Gawith Full Virginia Flake said. To be honest, I don’t recall ever buying my own tin of this stuff. It was, like most of my more curious corners of my tobacco cellar, a gift from the countless, generous pipe guys that roam this planet (aren’t we all, though?). I’m not one subject to hype; I don’t go to opening-night movies, I don’t “hurry, while supplies last.” I am not more interested in a popular restaurant just because others go there, and I couldn’t care less about the newest phone technology. Like anything, pipe tobacco has its darlings and its demons, as well as the shooting stars and the sinking ships. SG’s FVF is one of those that developed a solid following as well as a bandwagon fan base. To be honest, this is and is not the first time I’ve smoked this tobacco: a few years ago, it was available in fresh-as-could-be bulk and was about as close as some could get to getting any of this tobacco. The fresh bulk wasn’t much to write home about. Being more interested in actually smoking than acquiring, I bought and stashed handful of tins then I quickly lost interest after the masses made it largely unavailable at the time. 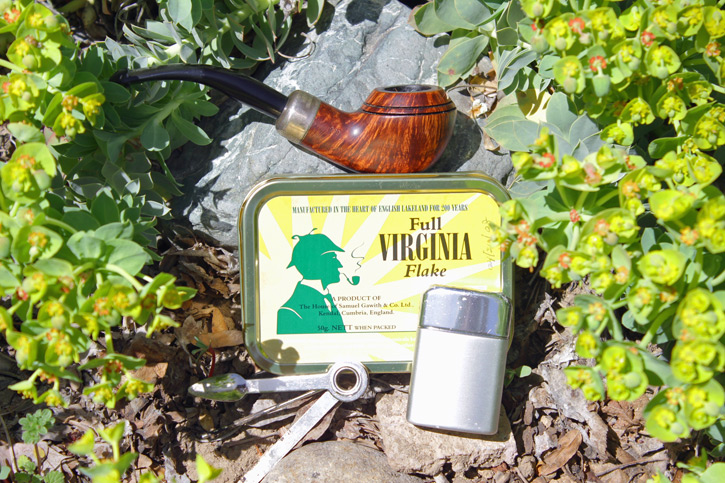 Popping open this nearly decade-old tin of FVF I found what pretty much looked like tobacco bacon inside. This is one of the delights of flake tobacco: it is beautiful. The kaleidoscope of earthy colors, the sparkle of crystals and plume from the aging process, the obvious look that a crafty human once laid hands upon to produce, the feel of the flake itself, and then joyfully preparing the tobacco and lighting it up. Like most Sam Gawith flakes, it’s a bit on the moist side, and I dried out the rubbed-out pieces a bit as I’m wont to do (you don’t have to). I have a few select Peterson pipes I only bring out for Virginia tobacco, and I haven’t seen these beauties since the end of last summer. As I lit my pipe, which was effortless by the way–moisture or not, I was cheerfully greeted by both morning sun and these mellow Virginias.

The thing that sets this tobacco aside from nearly any other flake I have smoked is the aroma. It truly isn’t often we get to smell the steely curls of smoke coming off our bowls, or as the gentle cloud spreads throughout the room. It’s sweet in the most natural tobacco way, nearly baked-bread kind of good. The nose from the other end out of the palate picks up on this while puffing, and the tongue is delighted with complex and subtle honeys, treacles and a light spiced loaf. Any traces of grassy notes I experienced when I smoked this stuff from un-aged, gigantic bulk strips is long gone. This is the richest tobacco that I can truly call “un-meaty.” All of this is experienced in the first part of the bowl. If that doesn’t entice and encourage one to go further, please check your pulse.

I’m not swayed easily, but I do have a good sense of hesitation when something, hell anything in life, starts out this good. Music albums, peach cobbler, a first date, a new bottle of scotch–we’ve all been there when things are going smashingly and the too-good-to-be-true senses start tingling. FVF isn’t this kind of experience. Perhaps it is the age that took out the problems and guesswork out of getting to know the tobacco, but the middle of the bowl got even better. The richness nearly doubled, and the gravity-increasing properties of the nicotine sunk me into the chair further, and I happily wasn’t going anywhere anytime soon. This tobacco’s warmth comes in part from (and I’m guessing here) one of my favorite tobaccos, red Virginia. I’m a big fan of Red Virginia for its ability to cut through the sharpness of bright Virginia, and to meld solidly with just about anything else it comes in contact with. The other part of red Virginia is the tongue-tingling spice that while different than an Oriental/Turkish, is more Marrakesh than picante-hot. The whisper of molasses in between these factors, which I very much sense in this tobacco, creates a sweet treat that will satisfy even the most sourpuss of anti-sweet guys out there, of which I am quite that. The absolutely simple, just-right sweetness I would say is the surprising star here, with extra points given for pleasure consistency. Performance of this tobacco is flawless. While being a bit moist, it is completely manageable, tampable, and ultimately smokeable. 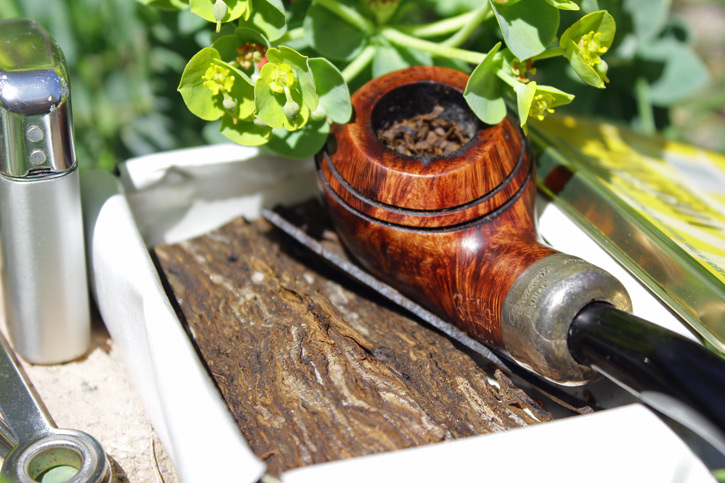 The most difficult part of smoking a bowl of this stuff is the end. The fact there is an end at all is disappointing, because once you get going you’re going to want to keep it up. I highly suggest not loading another bowl right away. Someone wise once told me, with tobacco as with many pleasures in life, to stop while you still want a little bit more. That way, you keep the want-it mentality going for next time, and it becomes something to look forward to. Nicotine is pretty solid in this flake, so don’t smoke it fast. It’d be criminal to miss one moment anyway. Especially on a nice spring day with a glass of iced tea or a light hefeweizen beer.

It’s really tough to do a review on a tobacco that has age on it when new counterparts are available immediately. It’s also tough to talk about one of the most talked-about tobaccos I can think of in recent years. Aged tobacco really has a leg-up on the new stuff most of the time, and there’s always that risk of year-to-year, and crop-to-crop differences adding or subtracting nuances, even over time. In the case of Full Virginia Flake, however, this stuff by accident or design was meant to age. Sam Gawith uses pretty tough square tins that hold their seal nicely, the all-Virginia mix is pretty moist allowing it to make for great aging, and there’s evidently a lot of tasty things the anaerobic “fermenting critters” like to eat in there. My advice? Buy it in the tin. Write a date on it. Wait it out. Let this stuff age like it was meant to. The mellow, warm and pleasant sweetness to the beautiful flakes, and finally the “unfinicky” nature of the performance for anywhere, anytime readiness. The only drawback is the patience you must have to get the FVF to open up to this point, I fear.

Contemplation here may well be complete: did I just do what others did years before me? Did I merely stumble upon a good batch? Did I just jump on the bandwagon for Samuel Gawith’s Full Virginia Flake? Am I a bit late to the party? Maybe, and I don’t care. The idea with anything said to be good is to always be a little skeptical. On the other hand, to be honest with yourself when you’re loving the hell out of something others do as well, hype or not, there’s hardly a damned thing wrong with that. People’s approval or disapproval of your enjoyment be damned. If it’s good: smoke it. If you’re happy, rinse and repeat.