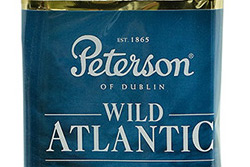 Ever had a hankerin’ for pumpkin pie in July? Mulled wine in spring? Grilling up hamburgers in a snowstorm? Yeah, me too. This was pretty much me with Latakia for the past week. It might be hotter than the devil’s toenail fungus outside, but here I am, seasonally breaking my own tendencies and smoking an English blend during summer.

It all started when I picked up (yet another) Peterson product, this time a sea-blue pouch of something called “Wild Atlantic.” It tempted me away from routine and circumstantial, seasonal dogma–I’m not much for the smoky stuff this time of year. The pouch of this leaf is inexpensive, and I’ve had some pretty good luck with the Peterson line of non-aromatic tobaccos. Generally speaking, I think most of us (especially in the US) don’t buy too much pouched pipe tobacco. For some reason, it suggests the pipe tobacco might not be quite as nice or quality as something in a tin. The last time I had a good tobacco I enjoyed out of a pouch was Warrior Plug–which the only reason why I don’t think they tinned that stuff was because it would sound like a rock rattling in a bean can. 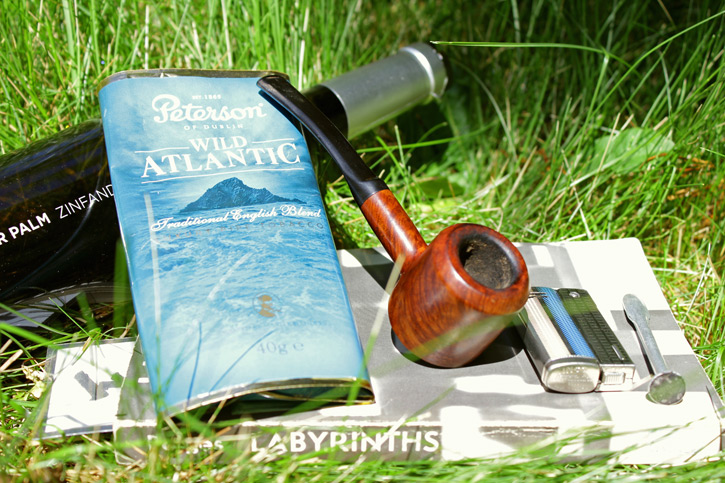 Opening this pouch is easier than with other tobaccos, as many pipe tobacco pouches seem to be sealed for the coming end-times. There is an advantage here, as pouches never leave a person feeling they did something prematurely or wrong once that precious seal hisses when it is opened like a tin. Wild Atlantic’s scent is very English, not too heavy nor light on the Latakia, with a fairly evenly-distributed color of the tobacco between the dark smoky stuff and lighter Virginias. Moisture content is just about where it should be for my needs, not sticky or soaked and not brittle.

When I first lit Wild Atlantic I was surprised–it’s actually very reasonable on the Latakia. For an English mixture, it does a great job showcasing that it indeed has Latakia but never takes over. Since this tobacco is in a pouch, it doesn’t get that “mellowed” action that tends to do nearly any leaf good when sealed in a tin, even for a few months. Bulk tobaccos of the same name and make tend to be very different from their tinned counterparts. Wild Atlantic smokes decidedly smooth, and isn’t particularly wild at all. Which intrigued me further, because I like a bit of edgy character in my tobacco. Far from boring, bowl after bowl, this tobacco settled with me much like Peterson Balkan Delight does, being so simple yet so enjoyable. The character here is much like that, but a more Virginia-forward version. Early in a bowl, here’s hints of meaty, barbecue chicken sweetness on the nose, but savory, sage-like smokiness on the tongue. Later on, it gets a little spicier and richer, beefier and even tinges of salt–either that, or my imagination of inhaling a little brined Atlantic breeze is taking over. It did well with sweeter whiskeys, like bourbon and (not surprisingly) utilitarian Irish whiskey like Powers, but also paired well with coffee. I even suspect a nice sipping-quality red wine might do the trick! Again, I’m not sure why I’m changing things up this summer, but for me, Latakia is cold-weather leaf. It must be the campfire/peatiness that acts like a warm hug for the senses. Hugs are the last thing I want when I’m overheated. 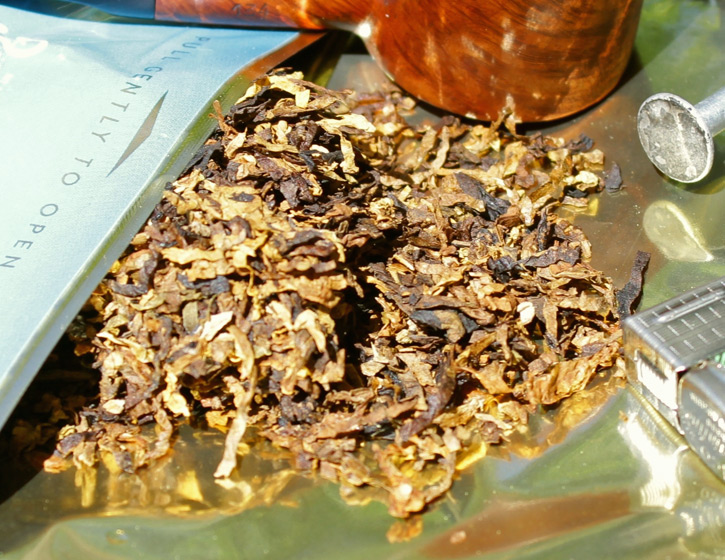 Wild Atlantic’s ribbon cut does well for easy packing, even-burning and takes a flame without any trouble. The nicotine content is barely pushing mid-range, but the blend does deliver some satisfaction. It bears mentioning that keeping this tobacco in its original pouch is probably not the wisest choice for drier climates, as the seal on it is nothing more than folded plastic and mylar held closed by a sticky label. The label eventually loses adhesive, and in my case, tobacco started escaping and ending up all over the place. Get a zip-top baggie for it, a zippered tobacco pouch or even put it in a jar to keep it in its smoking prime.

This is the kind of tobacco I could confidently suggest to a seasoned smoker looking for a great all-day outdoor “doing stuff” smoke, be it fishing, hunting or hiking, or even to the newer guy who wants to try something in the English tobacco realm. The gentle-but-with-character way about Wild Atlantic along with surprisingly quality leaf out of a pouch, low cost and nearly effortless performance gives it very decent marks in my book.

Maybe what I need is a good camping trip up in the mountains, or a day’s drive to the coastal waters of the Northwestern US. As temperatures here continue to climb, especially as an outdoor smoker, I find myself either forced to stay in an air-conditioned nightmare with the walls closing in or sweating something fierce trying my darndest to relax with a bowlful. Maybe that’s another thing our tobacco can do for us: sharpen our wits to our day-in and day-out. If the tobacco is right, but the location is not–it’s easer to move the tobacco to the proper setting than it is the setting to the tobacco.