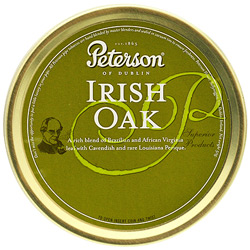 Around the time I thought I wasn’t going to let go of Latakia before it started to snow again, I was reminded of a tobacco I had tried and enjoyed a while back but didn’t really get to know. It’s a curious mixture, one put out by Peterson of Dublin (presumably by Orlik) called “Irish Oak.” You might recall about a year ago I did a spread on Peterson’s Balkan Delight, and I was pretty charmed by it. This is when I tried the last little bit of Irish Oak that was laying around the shop as a sample, and it intrigued me to revisit it one day.

Peterson’s various tins of pipe tobacco sometimes get a bad rap for being some of the stickiest, cloyingly-sweet aromatics out there, as well as not being a very “serious” tobacco. There’s a shred of truth to these assumptions, and not all of the tobacco bearing their name is grand-slam good, but hardly a reason for copy-and-paste prejudice. Those willing to explore really should do so. I’d guess roughly 40% of the Peterson tobacco line is squarely non-aromatic. Perfect Plug, Hyde Park, Wild Atlantic, 1865, University Flake, all of these are worthy of those looking into for a more savory (or more smoky) treat. Irish Flake (K&K?), as it so happens, remains one of my favorite up-and-at-’em morning nicotine rushes out there. I’ve been doing my best to open minds and briars to Peterson’s “sleeper” tobaccos that oft get overlooked. 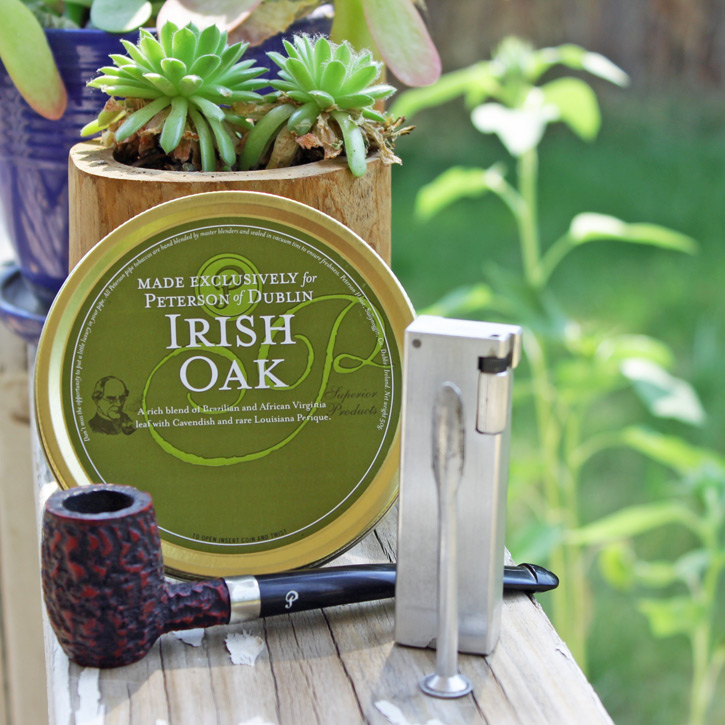 Irish Oak comes in a round tin with an olive green label, sharing not much more than the name and, “A rich blend of Brazilin and African Virginia leaf with Cavendish and rare Louisiana Perique.” Naturally, my first concern was the mention of Cavendish, as I’m not typically a fan. My second concern was for the Perique, which has the tendency to be overwhelming to my senses at times. Popping the tin open reveals a gently mottled mélange of which can only be described as oaky-colored tobacco ribbons, and it smells of light and refreshing fig-grapefruit. Moisture content is about perfect for anyone, those who prefer to it to dry out a tad won’t have to wait long as well as those who prefer a firm-packed and moister leaf.

Packing and lighting Irish Oak is easy. I chose theme here, picking up a Peterson Army 999 and a pre-Republic model 80 which had similar sized tobacco chambers (cobs, which are a thing for me, also did their duty). First lights don’t give off much of a flavor beyond a basic sweet Virginia, but soon thereafter the Perique will tingle the tongue–and not too much, I might add. Cavendish aside, this isn’t at all a sauced or topped aromatic tobacco. After the first quarter of the bowl, this tobacco really comes into its own: not only does the Perique keep the spice volume low, the unsweetened Cavendish lends what it should, a thicker mouth-feel of the smoke. There’s hints of distant sage, a bit of tart apple, and a wheat-like cracker crispness. While this isn’t a completely wild tobacco experience, the flavors being as gentle as they are, none of my puffing was asleep at the wheel. This is a good “companion” smoke, be it an easy day in the yard, a drive, or mindlessly watching a movie. The end of the bowl was perhaps my favorite, as all of the components seem to suddenly all play together and concentrate into a finale–there’s a surprising tarry thickness that emphasizes the varying tart and sweet likeness of the Virginias used, then suddenly, the bowl is ash. Nicotine is moderate and builds up toward the end as well.

Lately I have been making my own effervescent concoctions of homemade seltzer water with plenty of ice and generous shakes of various herbal bitters I have on hand, and these were quite the pairing. If that isn’t your cup of bubbly, I might suggest ginger ale with a shot of good rye (I used Rittenhouse) or a Crabbie’s Ginger Beer. 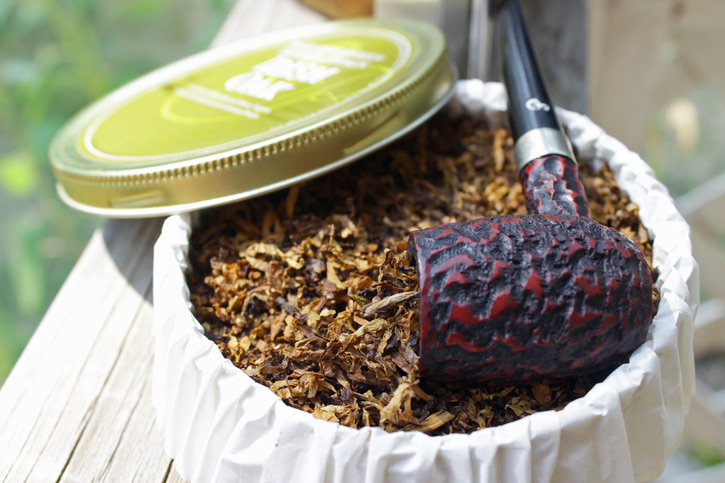 My only complaints about Peterson Irish Oak is it seems to burn relatively fast even if smoking slowly, but not hot, mind you. Either that or I was lost in the various moments. I could have used a little more punch in the flavor department, but I learned to enjoy the mellowness rather than any up-front attitude I might be used to in other tobaccos. I firmly believe if you want a tobacco you can smoke all day, or if you’re a newbie that wants an intriguing way to step away from aromatics, this mixture might be for you. The clean ease of Irish Oak makes up for any criticism I could give to it. This one won’t knock your socks off, but it’s worth picking up a tin and giving a shot.