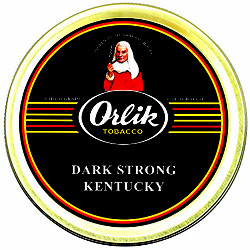 October is by far my favorite month of the year. It abandons the heat and bustle of summertime as it holds at bay the harshness of the wintertime. The fall colors are a treat, the smells are fresh, the mornings brisk, and the afternoons mild. In the Northern hemisphere, most of the harvest is in full swing and much of the good stuff coming from farms and gardens is rolling into farmer’s markets and grocery stores. The first real harvest of grain back in August gets made into beer and spirits, and to make way for new barrels in aging rooms, the aged whiskeys come out from smaller distilleries. Autumn decorations dot the porches of neighborhoods, suburban minivan-moms lose their minds over pumpkin-spiced…everything, and kids strain and gnash on their leashes, eager to overdose on free sugar at the end of the month. It’s the best time of year.

It’s no accident my eye caught the black, red, and yellow graphics on a tin of Orlik Dark Strong Kentucky recently. I’m in the spirit, and back from the dead, STG/Lane has reanimated this once-popular tobacco for us to smoke. Not having an empirical basis to go by on the old stuff, as it was before my time with the briar, I have the easy task of only comparing it to itself. So, set down your lattes and seasonal brews, then pause your ranting at the football game for a moment.

“A unique mix of selected ripe Virginia tobaccos and Dark Fired Kentucky tobacco gives this blend its characteristic and unmatched taste. The flake cut provides a beautiful contrast between the bright and dark tobaccos.” 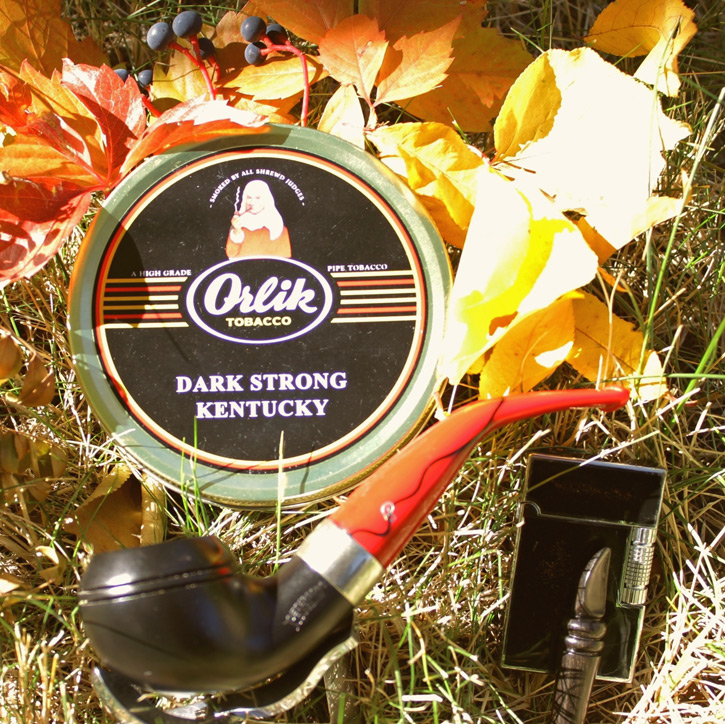 The second sentence doesn’t lie: There’s quite the duality of the two tobaccos upon visual inspection. When I opened the tin, not only did this strike me as interesting, I had to ponder whether the two tobaccos were interspersed well enough to provide smoking flavor and consistency bowl to bowl. For example, GLP Jackknife Plug has been carefully layered in a exact way before pressing and cutting against the grain means more consistent distribution of components. This tobacco had some flakes that had thin areas of bright Virginia “filling” while others had more. Those that were equal, however, looked like strips of pretty tobacco bacon, and I liked that. The smell in the tin is almost treacle-like; a lot sweeter than I had anticipated, to be honest.

This is a dense tobacco. I’m so used to flakes that fall apart nearly instantly, yet Dark Strong Kentucky’s flakes must have used steamrollers as presses. I did experiment with allowing the tobacco to dry a bit before lighting (which I suggest you do as well, which will prevent you needing a blow-torch to get it lit), and instead of leafy strands I got rough nuggets. In all fairness, these were plenty easy to light and get going. Think more charcoal briquettes than loose tinder. My first puffs were surprisingly sweet. This isn’t an aromatic tobacco but there’s definitely a reason why this stuff smelled treacly once the tin was opened. It isn’t distracting or cloying, however, when I’m getting to know a tobacco, especially one with strong components or bright Virginias, I’d rather those greet me at the door when I come a’knockin’.

The first quarter of the bowl of DSK is relatively easy. I’m not spinning out of my chair from over nicotinization and relighting and tamping is unnecessary. I’m not struggling to find the richness of the Kentucky, yet I am missing much of the subtlety the Virginia leaves could provide. To its credit, these flakes make a lot of pleasant, voluminous smoke without a lot of effort, which is a very important thing to me. Unfortunately, the dry, carob and sweet nature of the smoke is making it rather difficult to find much else. In the distance there’s a woodstove fire nose to the tobacco, and a fantastic spice undertone, but how much strain is too much to hone in on those other qualities?

Halfway down the bowl, and I say that almost laughably because of the small pipes I found working best for this product, the sweetness calms itself down a tad. This is a good thing. The experience thus far as been okay in the performance department: cool smoke, even burning, minimal lighting, no tongue-searing nor biting. I continue, however, to find out where the tobacco is. I’m sure you’ve read my slightly abstract way of describing what I like in tobacco when I describe it as “wild.” By “wild,” I’m typically referring to the natural attitude of the tobacco. The kind of attitude that probably makes some people a little sheepish, like a little prickle on the nose and tongue, a helping of compost, a bit of nicotine, a touch of dirtiness. Character. Personality. Something to remind me that what I’m smoking came from the ground and handled thusly, swaddled in soil, bathed in sunlight and caressed by breezes. Wild. Sometimes tobacco is made so easy to smoke the personality has been stripped from the leaves. In the case of Dark Strong Kentucky, I can sense the wildness in it, and I like it: but where’s the structure? The sweetness is part of the issue, the other might be in imbalance of types of tobacco. It’s like putting too much sauce on a brisket sandwich that doesn’t have enough bread. The components are all correct, but in the improper amounts. 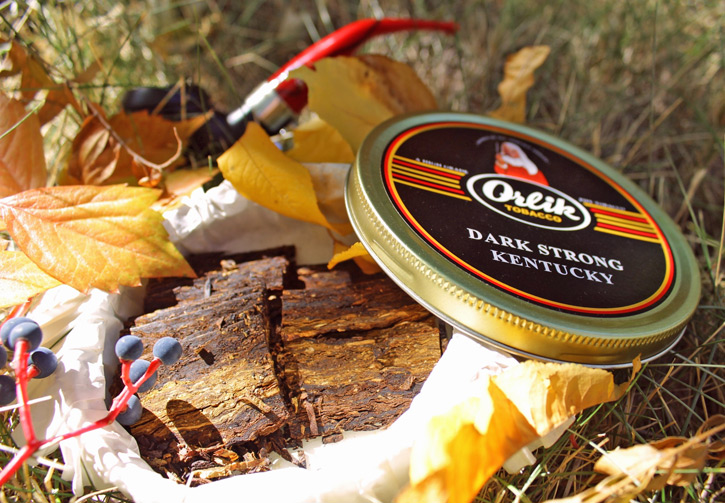 Toward each of the finales of my subsequent pipes-full of this stuff is when I could finally taste something other than molasses and generic subtle spiciness. Don’t get me wrong, there’s a tobacco flavor throughout the experience, it simply goes unnamed and muddled. The end of the bowl is where the magic happens. It’s been a long wait. It’s flavors of cedar, light citrus and a light grassiness. I almost expected to have a finish of red Virginia and its lovely yeast-like and bready nature that I adore so much, but this wasn’t to be had. There is a bit of a dry, pithy and sour attitude at times which is a nice break from the thicker sweetness of the beginning parts of the bowl. Nicotine, surprisingly, stays rather moderate overall. There was also some value in setting down a half-smoked bowl and coming back to it an hour later. I tried pairing various beverages and nothing really stuck. It was pretty ho-hum with whiskey and gin was no-go. Coffee was acceptable but not stellar, and tea was simply too overwhelmed. I’m not much a cocktail maker or drinker, but I might think something like a classic Old Fashioned or a Whiskey Fizz might do okay with this reboot flake.

Wrapping up this month’s experience with Orlik’s Dark Strong Kentucky, I can say I was encouraged enough by the performance and the “almost there” aspect with the product to say, yes, I enjoyed it. In fact, because there is so much promise behind this tobacco from bowl to bowl, I probably became more critical than I normally would, rather than simply dismissing it or blindly praising it. Promise versus delivery, however, are two different things. There are enough qualities to like in this flake to suggest it to newer smokers to explore what Dark Kentucky is all about, however, I think there are better examples out there. Old codgers that have been around the block are probably not going to enjoy it as much, not only because it is a sequel to another tobacco, but that it also lacks a bit of finesse and finish. I was happiest with the way it smoked more than the flavor and the poise though I’m not sure that will be enough for me to buy tins upon tins. Normally I’m relatively keen on what STG/Lane has done with a lot of blends they have adopted over the years, as they seem, to me, to understand the spirit of what makes pipe smoking a joy. This tobacco, on the other hand, could have used a little more beta-testing and tasting before deciding “…this is it!”