Oops, They Did It Again 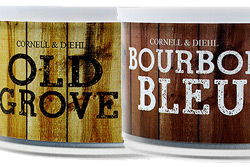 Back in August of last year, we took a look at Cornell & Diehl’s Cellar Series project—blends specifically designed for the hobbyist with aging in mind. [The Joy of Smokes] Perique was and is the driving force for the flavor profiles of the blends, as this condimental tobacco’s propensity to soften and season the mix are well-known and, if not predictable, surely amenable. Virginias of course provide the backbone, with high sugar content giving them the longevity and structure. Then come the supporting players of burley, Oriental and Cavendish, fine-tuning the chorus. The first three entries, Joie de Vivre, Oak Alley, and Chenet’s Cake, were standouts to be sure. The two newest follow-ups, Old Grove and Bourbon Bleu, carry on the high standard of innovation and skillful blending we expect from C&D splendidly. 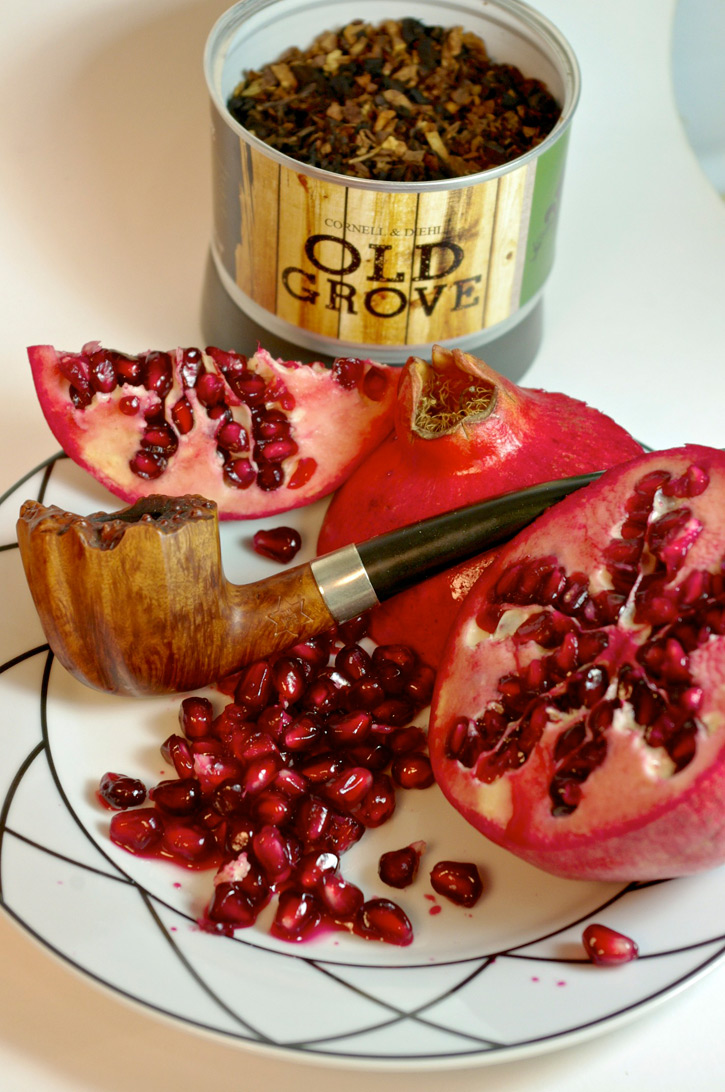 We’ll begin with Old Grove, a most peculiar blend. The tin text notes a mixture of bright and red Virginias, dark burley, Katerini Turkish, black Cavendish and granulated Perique, overlaid with a subtle pomegranate topping. Wait… pomegranate? Indeed, and although it took me a bit to wrap my head around this one, it’s an excellent smoke that I’m very interested to taste with a few years under its belt. Both tins from my review were produced in April of this year, from the first production batch I’d assume, and as such are a bit green behind the ear, as are most blends at this stage.

Opening the fresh tin is, well, anything but subtle. The pomegranate unwraps itself broadly and exuberantly, smelling for all the world like a grape soda. To be honest, it was a bit surprising, and a tad overpowering, at this early stage, and the first few bowls were inconsistent. A week of airing time was in order, so it was set aside to investigate Bourbon Bleu in the meantime. The initial bouquet faded considerably after the first day, and the loosely-closed tin waited patiently for a second chance. Eight days later, palate recharged, we began to reacquaint ourselves on firmer footing. 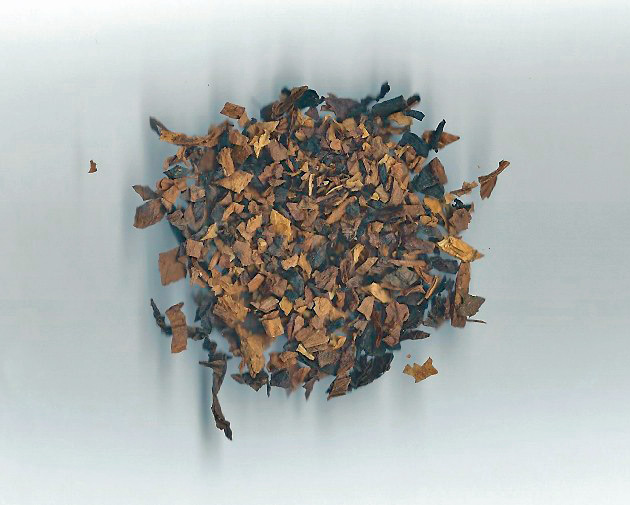 Old Grove is easily a cousin of Captain Bob’s Blend, that developed by Craig Tarler’s good friend and PipesMagazine.com forum denizen "Captain" Bob Coffey. While the latter contains Latakia as well, the initial impressions and flavoring profile are analogous. The early burst of grape soda settled into a more discernible pomegranate aroma after the first day, and as the moisture level lowered, the overall bouquet was tempered with more of the typical tobacco scents coming through. Notable is that although it was very soda-like at first, it didn’t come off as cloyingly sweet, and some air time reinforced this. The added essence is thorough and rides pleasantly atop the intriguing base mixture of tobaccos, evident but not overpowering in the palate and nose, and quite tantalizing in the room note, settling into a smoky wine tone for bystanders. In the tin the broad, chunky ribbon is well-mottled, and though it lacks the Latakia of CBB, the Katerini coupled with the flavoring offer an almost-Syrian Lat aroma, mouthfeel, and flavor. The structure is actually quite complex and layered underneath the surface, which offers real promise for down the road. Thinking in terms of how it will age in the projected 10-15 year timeframe offered on the tin, blends like Esoterica’s Pembroke or Ramsgate come to mind; both are deeply seasoned and a bit on the saucy side when young, but have weathered a decade or two superbly, and with their defining flavorings intact. The fruitiness of the topping will marry well into the Turkish and Perique tobaccos’ natural talents and direct their maturity, while the Virginia and Cavendish will supply the long-term stability. Those new to crossover-style blends or "non-aro snobs" may be off put at first, while aromatic lovers and those who enjoy experimenting will find an engaging orchestra to puzzle out and perhaps broaden their smoking horizons. 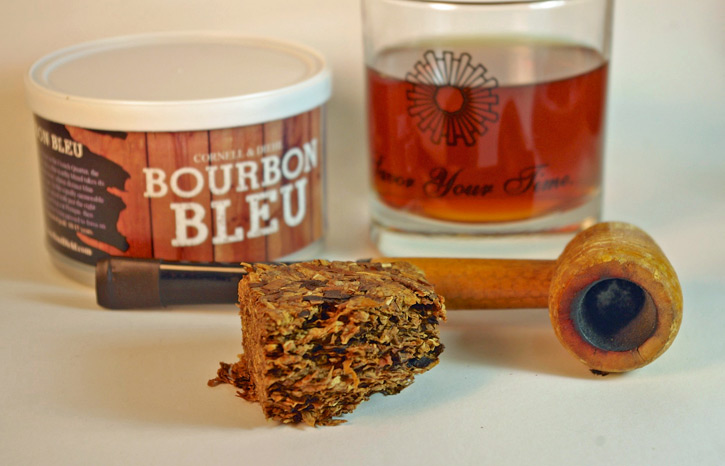 And now a trip down the Quarter to Bourbon Street. Here in crumble cake presentation, which happens to be one of my favorites, is a stout VaPer blend with a shot of whiskey for good measure. The bourbon in this is solid, and comes through on the nose from a freshly-opened tin distinctly and pleasingly; I could practically feel the warmth in my belly that a glass of Basil Hayden’s brings, and it seems only appropriate to spin up some Preservation Hall Jazz Band records from the vault to accompany my tasting.

Not surprisingly, this tobacco is perfectly suited to a Missouri Meerschaum corncob. The spool and country gentleman styles provide a perfect furnace to roast it in, and can simmer along for a good hour per bowl. The nose is quite piquant on opening, like the Old Grove; again, a measure of youthful exuberance for these blends with their consideration for aging. The cake is on the tannish-dun side, speckled through with jet black Perique and dark-fired Kentucky leaf. Crumbling quite easily, the leaf is short ribbon and cross-cut, making packing a full bowl a little on the tight side a breeze. 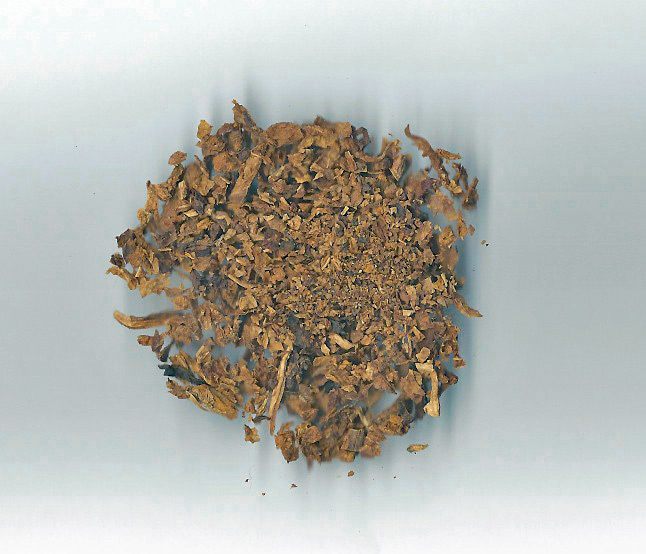 Lighting the char is akin to that first shot of whiskey, with a refreshing burn and bouquet of bourbon—it stays quite evident even after a solid week of airing out, melded perfectly within the leaf. The profile here is much more straightforward than Old Grove; coming with a steady, swinging 2-4 beat, it’s a bundle of spice and bass notes, with sharp Virginia solos ringing like a trumpet above the steady fruity-meets-smoky thump of the dark leafs. The Perique is very tempered here, with its earthy truffle notes highlighted rather than its fruitier ones. Dark-fired Kentucky brings to bear its heavy, woody tone to shape the flavor, and though it never overpowers, it certainly lends gravity to the smoking session. The profile stands firmly in tones of wood and and leather with a salty tang on the aftertaste, and is most satisfying with a sweet tea or, naturally, a glass of room-temperature whiskey.

To peer through the looking glass at what lies ahead for this blend, it will likely sweeten considerably over time with its predominantly Virginia composition absorbing the bourbon and orchestrating the show. The sweet vegetal notes should balance out the heavier smokiness of the dark-fired considerably in as little as four or five years’ time; though it’s a good smoke now, it’s still quite young and eager to mature into a great one. With both blends I’m happy to add a couple of tins of each to the cellar; now that introductory tastes have been recorded, we can revisit to see the journey that they take. 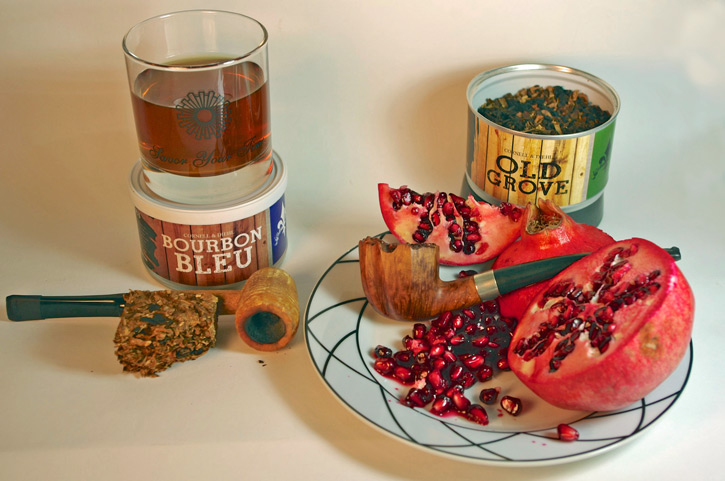