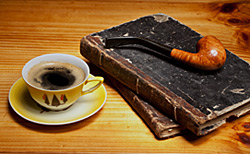 The weather’s turning, and so my open rotation turns with it. Unlike previous years, the temperatures here have been on a gradual and steady decline, rather than their usual frenetic rollercoaster ride, and I’ve been allowed the luxury of stepping back and seeing how my palate acclimates and accommodates week by week. Whether consciously or unconsciously, I think all pipe smokers tend to vary their open rotation, at least to a small degree, in accordance with the prevailing climate. It’s only natural, as our perception of taste is a puzzle that is affected by dozens of variables both internal and external; temperature and humidity are obvious environmental ones, while the amount of sunlight we’re exposed to altering our natural vitamin D production is a less-apparent byproduct of the waning days. Common wisdom holds Latakia blends to be winter favorites, Virginias for summer, and cigars for barbeque weather. Uncommon wisdom, namely mine, likes to buck those trends and pay attention to my palate. 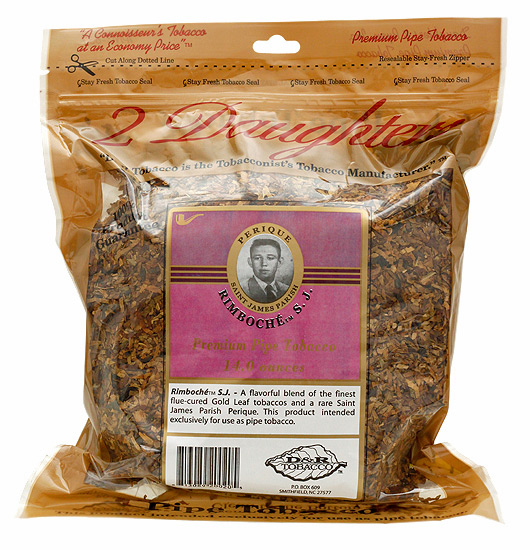 Returning from New Orleans in October, I was on a Perique kick for obvious reasons, and smoked through a few ounces of Daughters & Ryan’s SJ Rimboché. It’s a pronounced, sharp blend; I tend to think of it as the extra-extra-sharp cheddar of the tobacco world. The weather was still warm and mild, with temperatures in the seventies and medium humidity, and the dry, sharp smoke was fitting perfectly. I get my SJ in the 14-ounce bags and then transfer it to mason jars, and with one batch in 2013 I tried a little experiment. First, I added 2 ounces of McClelland Blending Perique to make an even pound; then I steamed the leaf lightly in the oven, spreading it evenly on a cookie sheet on the top rack with a pan of water on the bottom rack at 220F for 2 hours; I then transferred the contents to preheated jars, packed them tightly, and baked them at 350F for another 2 hours before finally sealing them. I also prepared two jars of straight SJ with the steam and bake treatment to act as a control. It should go without saying that I was fastidious about the cleanliness of my operation in order to mitigate the likelihood of mold growth, which I’ve been burned by in jarring experiments in the past. 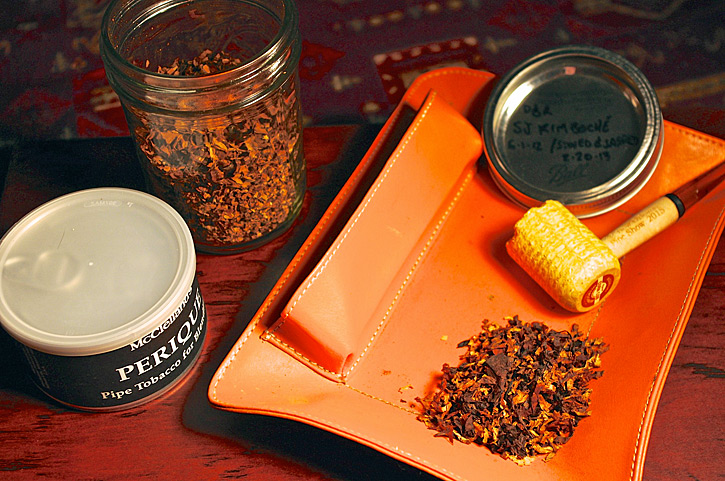 For its two and three-quarter years in captivity, the blend deepened measurably, yet retained all of its sharpness. Opening the jar released an immense stewed plum bouquet that set my mouth watering. But to my surprise, overall it did not sweeten considerably, counter to my anticipations. Both the Periqued-up blend and the control sample still presented a dry, keen, cheddary-sharp smoke. Unadulterated SJ has a lighter-bodied profile, composed mainly of a bright, astringent Virginia riding above the counterpoint of the darker, earthy Perique pepperiness; it’s a smoke that’s rough-edged and acrid in a very good way. My experimental jars retained all of the familiar SJ acerbity, while amplifying the plum and pepper earthiness, rounding out and deepening the mouthfeel and body, and uncovering a not unpleasant metallic tinge to the profile. All in all, not a stellar transformation, but an appreciable difference; the experiment certainly helped my understanding of the effects of time and process with tobacco. I still have six jars resting in the cellar, and look forward to seeing what a few more years bring to the equation. 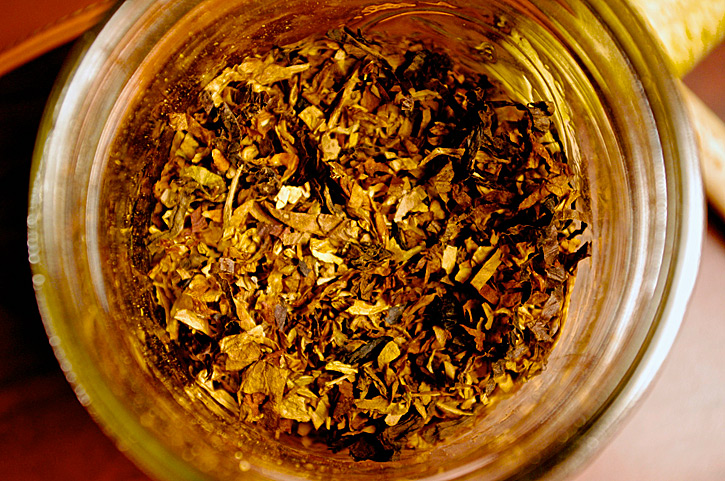 As October marched on into November, the temperatures crept lower each day. Dipping into the cellar for another tin, I came up with McClelland’s Stave-Aged 35, easily one of the most singular Virginias out there. I’d picked up a few tins when it came out in 2012, and though I had sampled some and enjoyed it at pipe club, my own tins went straight to the vault. This one has "summertime smoke" written all over it: straight Virginia blend, bourbon, that luscious McClelland ketchup …yet here I was, pulling sweaters from the closet and enjoying 35 in the brisk mid-sixties weather. 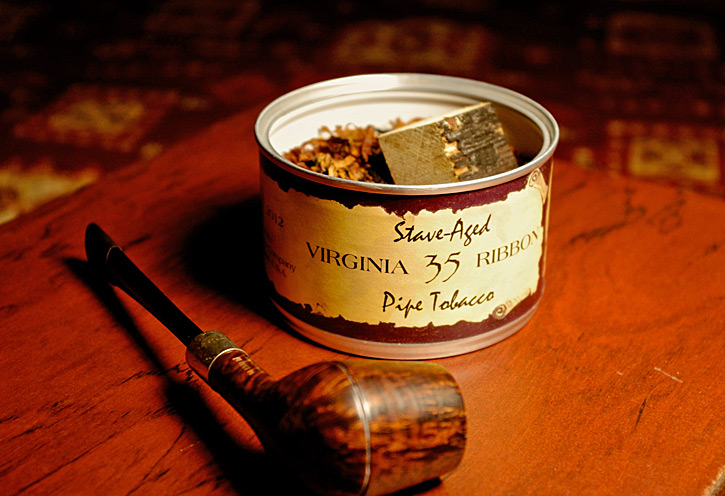 Opening this tin was a real treat, not the gimmick I had originally thought it was. The inclusion of a chunk of a bourbon cask was something I’d dismissed as cute when I first tasted the blend at pipe club, but then I didn’t have the experience of opening the tin myself—my sampling came from a nearly-empty tin that had aired out for quite some time prior. That’s a shame, because the experience is wonderful. In the tin it’s pure barbeque, with the familiar McClelland ketchup slathered on the charred oak and bourbon aromas like a rack of ribs. Short-cut ribbons of mahogany and chocolate, flecked with yellow strands and pitch-black nuggets cushion the one-inch cube of oak; the wood itself is charred deeply on one face, and is redolent with the sweet oaky whiskey flavor along with a good dose of burnt ends. 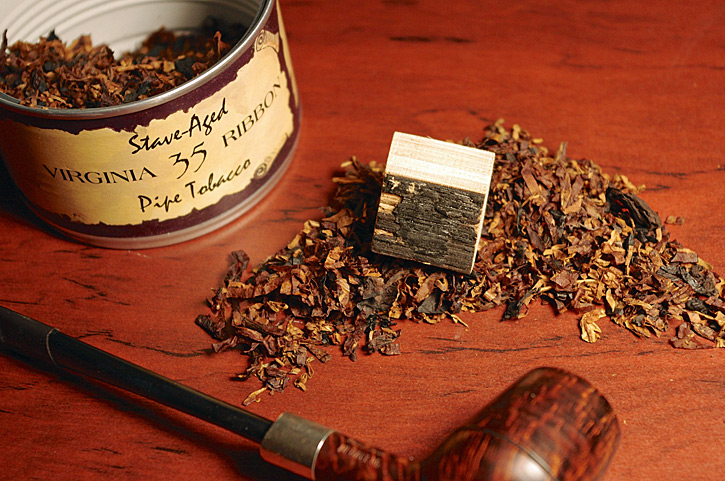 The aroma of the tin translates and expands into the smoking experience spectacularly. Its profile is full and satisfying, decidedly on the savory side but with the perfect hint of sweetness to add definition and illustrate the layers of flavor. The Virginia begins with a familiar hay-like taste, dry and bright, but the undercurrent of smoky bourbon comes through after the initial light and lends an ever-increasing meatiness to the bowl. The mouthfeel tingles but does not bite, and has all the feeling of sipping a glass of whiskey and the frisson of warmth that settles into the back of one’s throat. For all this, it’s the char on the oak that truly makes this blend stand out from being just a bourbon-flavored aromatic. It lends subtle hints of its character to the leaf that float in and out of every mouthful: at one turn, it imparts a Latakia-like incense; a moment later and it’s the crunchy bark of a pointed brisket; a few puffs later and I could swear there were Cracker Jacks in the bowl. Add to that how easy the draw and burn are and the wine-like aftertaste, heavy with oak, and this is one hell of an anniversary blend. Curling up in my easy chair with a mug of Earl Grey and a wool sweater, I don’t mind the weather at all.