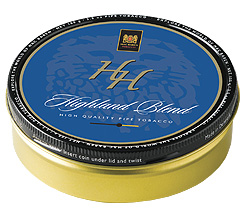 Every year at the Chicago Pipe Show in May, Mac Baren unveils a new tobacco blend of the year. PipesMagazine.com just received a pre-release sample, and here’s the early review on it. This is a new HH series blend named "Highland Blend". Some of you Mac Baren fans may remember the Mac Baren Highland Mixture, but that was discontinued five years ago. I asked Mac Baren what the difference is between the old Highland Mixture (which I have never smoked) and the new Highland Blend.

According to Per Jensen, Mac Baren Product Specialist and spokesman, "The difference between Highland Mixture and Highland Blend is the following. We took the great idea from the Highland Mixture (the topping with a 30 year old Glenfarclas, Latakia and the mix of Virginias, Burleys and the Cavendish), however I have adjusted the blend a bit. The result is a slightly more smoky taste (more Latakia which goes excellent with the whisky) and I have nearly eliminated the possibility of tongue-bite by changing some Virginias and replacing them with some excellent Burleys."

The tin description for the new HH Highland Mixture reads:

Fully matured Virginias, Ready Rubbed Burleys, Latakia and a touch of Fire-cured Cavendish is the recipe. We added one of the worlds finest 30-year old Scotch whiskies, Glenfarclas. The natural flavours from the tobacco and the delightful taste of the Scotch marry perfectly, so when smoked you experience the mellow taste and subtle smoky note of the tobaccos combined with the overtone of a fine scotch. The pouch has a graphic that denotes a strength rating of "3". I asked Mac Baren for clarification on this, and they replied; "Concerning the strength 3, this means it is one of our more "stronger" blends. 1 is the mildest and 3 is the strongest we use. The strength [measurement] is a mix of both nicotine satisfaction and taste."

Upon opening the pouch, the tobacco is loosely packed, but it may come slightly tighter packed in the tins. We will have to wait and see. Mac Baren sells their tobacco in the USA in vacuum-sealed 100-gram tins, but for sampling purposes, I received a pouch. There’s a nice color-mix of blondes, brunettes, and raven-haired tobaccos. I confirmed with Per that the yellow pieces are the Virginia tobaccos, light browns are Burley and the black tobaccos are the Latakia and Fire-cured Cavendish.

Cut-wise, it’s a medium-to-fine ribbon cut, which I like as I can more quickly and easily pack my bowl and light it up with little effort. (Although I do enjoy the other rituals brought by other types of cuts.) The ribbon-cut is mostly consistent with the exception of a few small chunkier pieces of pressed cuts, which may need some folding, if not a little bit of breaking up or rubbing out depending on how you like to pack your pipe. The light brown chunkier pressed pieces are the Burley tobaccos. 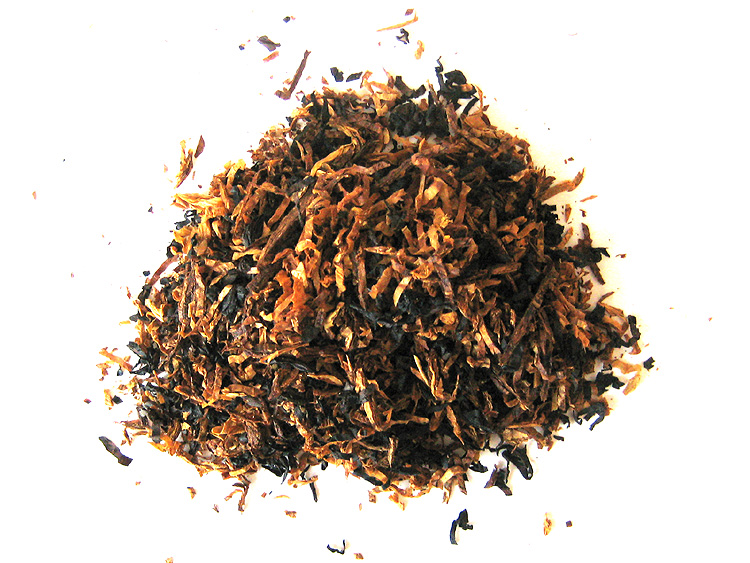 The moisture level on my sample from the newly opened sealed pouch feels perfect to the touch. It is neither too moist, nor dry, but just right. Even though this is topped with 30-year old Glenfarclas Scotch, the tobacco doesn’t feel too moist, nor sticky.

On initially opening the sample pouch, the Latakia makes itself noticed first, but not in an overbearing way. The Latakia is there, and jumps out at you first, but it’s not a "Latakia Bomb", there’s much more going on here. Upon dumping the pouch contents and fluffing up the tobaccos, and taking a nice big sniff you can detect a fine combination of the nuttiness from the Burleys, and a little sweetness from the Virginias, and the Cavendish just pulls it all together. I would not have known there was a Scotch topping from the "tin aroma". The nose is more of a natural tobacco blend than an aromatic. I’m anticipating good things to come.

I packed my pipe with the 3-step method, and just slightly crumbled a few of the chunkier pieces. Highland Blend is easy to pack and compress into the bowl. The pre-light draw has a flavor not unlike the pouch aroma, definite smokiness and sweetness combined.

The tobacco burned well for me. I only needed a few re-lights, and that is good for me. On average, I have to re-light my pipe 10 times throughout an entire bowl. I had about four re-lights here. It didn’t burn too hot, but I had a feeling that if pushed too hard, that it could bite. Sometimes when I smoke a tobacco that has a flavor I really like, in the process of trying to get more of the flavor, I could be accused of crudely gulping rather than elegantly sipping the tobacco – and that is when you are in danger of letting it bite you. I did not experience any tongue-bite here though. 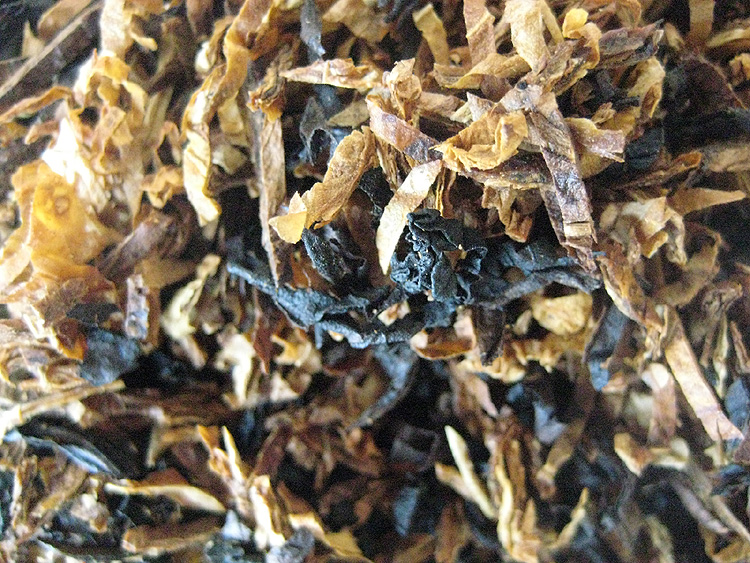 The initial light surprised me with more sweetness than I expected, but it was a good natural tasting sweetness, and not cloying at all. I thought I might have "stacked the deck" a little on the smoky side because the last bits of tobacco I put on top of the bowl were several long ribbon-cut strings of Latakia. However, the typical Latakia smokiness certainly doesn’t dominate. The Latakia and the Cavendish tobaccos in this blend are both Fire-cured, and they create the smoky part of the flavor. However, combined they represent less than 25% of the overall mixture. The main body of this blend is the Flue-Cured aged Virginias, and the Burleys.

I tamped the tobacco, and let it rest for a few minutes before applying the true light. As I contemplated the after-taste of the "false light", it reminded me of a nut bread, banana bread or even just slightly of carrot cake.

After applying the "true light" to the bowl, Highland Blend instantly became a delight. Mac Baren has developed something highly unique, and I think they will have a hit on their hands with this latest entry into the HH series. What’s really nice here is that not one single tobacco dominates, and neither does the 30-year old Glenfarclas Scotch. If I had not read the description first, I might have a hard time detecting all of the ingredients – they all combine to create something greater than the sum of its parts. This is the most amazing perfect marriage of all the ingredients that give Highland Blend a unique, sweet, nutty, smoky flavor. Of interesting note, the Latakia, which dominated at first in the tin aroma and the pre-light draw, went nearly to the background while smoking Highland Blend. If you strictly like to stick to blends heavily laden with Latakia, then Highland Blend might not be for you.

If, on the other hand you enjoy a blend with a melodious slight sweetness, nuttiness, and just a touch of smokiness then this is for you. Many pipesters typically classify any tobacco blend that has a topping as an aromatic. Highland Blend is topped with 30-year old Glenfarclas Scotch. However, the taste is natural tobacco, only slightly-to-medium sweet … the level of sweetness changes from mild to medium and back again as you smoke. It wasn’t until towards the end of the bowl that I could detect some of the scotch bouquet.

Mac Baren’s tin description says they created a perfect marriage –  and they did! Just like in a good marriage between two people, you balance each other out by keeping in check each other’s negative qualities, and bringing to the surface each other’s good qualities. That’s what the recipe in Highland Blend does. Each different type of tobacco brings out the best parts of the others, and mutes what could be the less desirable qualities of certain tobaccos.

"Professional tobacco reviewers" say you shouldn’t review a tobacco based on only smoking it once. You should smoke it over a period of time in different pipes at various times of the day under different circumstances. They say this for a good reason, as your impressions can change over time and with different variables that may occur before and during the smoking.

Everything described above was from my first bowl of Highland Blend smoked in the mid-afternoon with a clean-palate, and accompanied by water. I skipped lunch, had brushed my teeth after breakfast, and was only drinking water before the first smoke.

Then I smoked Highland Blend again, and there was a slightly different, yet still wonderful experience. I had a full dinner and drinks and then smoked Highland Blend in a different pipe. Dinner was an excellent, huge (.75 lb) fresh Salmon fillet that I topped with Montreal Steak seasoning, and Lima Beans with garlic and butter. I also had a couple of Bombay Sapphire Martinis. On my second smoking of Highland Blend, later in the evening after the meal and drinks, and choosing a different pipe, the smokiness of the Latakia was more noticeable. That was the only difference. This is a great tobacco.

I highly recommend Mac Baren HH Highland Blend to anyone that enjoys; Virginias, Burleys, Virginia-Periques, and mild Aromatics – I think smokers of all these types of blends are most likely to enjoy Highland Blend.

The first chance to get your hands on some will be at the Chicago Show at the Mac Baren table, which is usually near the back right side from the entrance. I apologize in advance if I knock any of you over when I run there to get some more, as my sample pouch will probably be long gone before then. The first 500 tins at the Chicagoland Pipe Show will be numbered and signed by Per Jensen.

I recommend you try to get your hands on Highland Blend as soon as you can.

Then, please give us your reviews of HH Highland Blend here. 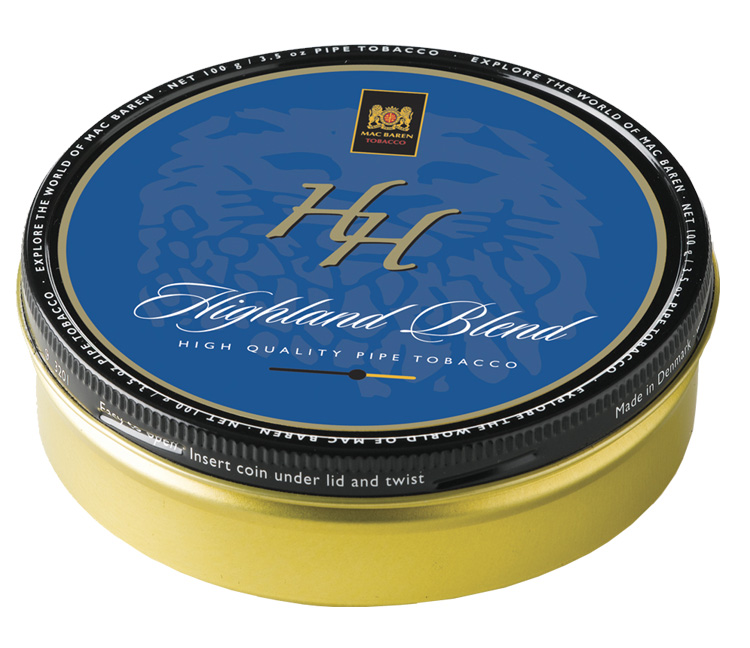