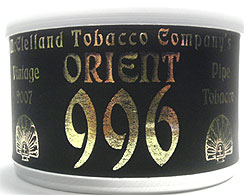 Tin Notes: A special blend of sugary bright Virginia and aged, mellow red Virginia, seasoned with a good amount of rare Yenidje and a touch of Syrian Latakia. Ready to smoke, but designed to age beautifully.

When I hear the word "Orient", I am immediately swept back to my days in Hong Kong. Although I was but a young boy (or, perhaps because of it), I have very vivid memories of the city. The sights and sounds; somehow familiar, yet so different to the ways of Western society in which I was raised. Navigating ones way through the sea of concrete, literally awash with masses of people jostling and shoving for position with an almost manic energy. The glow of neon and the clack of the omni-present Mah-jong parlour, the cacophony of voices and the throngs of vehicles.

But for me, nothing says Hong Kong – or the Orient for that matter – than the multitude of flavours and aromas found throughout the region. Street vendors line the sidewalks, proffering savory and succulent dishes for mere pennies. Entire towers comprised of various restaurants, each offering a different cuisine. Traditional Asian cuisine is well represented, of course, but having acted as the confluence between Oriental and Occidental cultures for decades has helped to shape the culinary shape of the city into something unique.

However, to only look at Hong Kong as representative of the Orient would be like looking at Captain Black as representative of all tobaccos. A massive section of land, the Orient encompasses parts of three continents, stretching from Eastern Europe across Asia to the Pacific Ocean; and from the Middle-East to the barren lands of Siberia in the high-Arctic.

This huge tract of land encompasses a plethora of cultures; with a myriad of lifestyles dependant, by and large, upon the surrounding environment and the type of agriculture that it will support. As one can imagine, the quest for simple nourishment drove the growth of cultural flavour for these different peoples, and as they flourished, each region became synonymous with the flavours they produce. With a slew of different climates, the area we refer to as the Orient produces several different varietals of spices, teas, and food-stuffs; each offering a singular experience. This too is true for tobaccos; with a myriad of varietals of our favourite plant, being produced throughout the region. Indeed, many of the Oriental varietals bear the names of the regions in which they are (or were originally) produced. Many more knowledgeable than I have written at great length on these various leaves, and I encourage you to read these works; for it would be an injustice were I to attempt to include all the many varieties in this article – both to the blend at hand and to the history of the leaf itself. But I digress.

With many of our favourite "condiment" type varietals coming out of the Orient, it seems only fitting that the area lend it’s name to a blend. In 2007, the Pipe Club of America released just such a blend, Orient 996, in a limited production (300 odd tins). In 2009, McClelland released a second batch of this blend under the name Orient 996 Vintage 2007 Pipe Tobacco under the "Collectors Series", and it is from this that my tins have come.

I first encountered this tobacco when visiting with a pipe-smoking friend of mine. Generously opening up his "active rotation" to me, I found my eyes kept returning to a lone tin; heavy black stock pressed with simple gold-leaf…Orient 996. Filling my bowl from his tin, I knew in an instant this tobacco was for me. Taking a second bowl for the road, I hurried home to place my own order.

A few days later, a package arrived at my door; my order had arrived! Grabbing my camera, I fired off a few shots of the tin (more on that later), grabbed a pipe, and sat down…only to discover with horror that this didn’t resemble the blend I had smoked at all!
It turns out this tobacco blend is a very strange creature. It really seems to benefit from exposure to oxygen. Although it is only slightly damp out of the tin, I find that four hours plus dry time really bring out delicate balance of the Oriental leaf…any less leaves me with a muddled and somewhat bitey mess to deal with.

The tin-note carries the familiar rich, tangy notes that are synonymous with McClellands pressed and stoved Virginias (thank you to Mr. Tad Gage for clarification on the source of this aroma), but with a sweet, almost fruity undertone. And yes, that means the hint of "ketchup" is present, but like all McClelland blends with this aroma I’ve encountered, this is limited to the tin-note only, and doesn’t transfer to the smoke.

A mixture of chocolate and nut browns, coppery golds, and blacks, this blend is presented as a coarse-cut ribbon. I do find the occasional chunk of broken flake that wasn’t fully tumbled, and suggest rubbing these out further, to avoid "pockets" of dominant flavouring.

This blend responds well to both the "three-stage" and "air pocket" packing methods; and although it smokes beautifully in briar, clay and meerschaum, it simply sings in a cob. A quick sip on the stem prior to lighting brings a mild fruity sweetness with a light herbal note to the palate.

On the charring light, I detect strong notes of sweet raisin, with the slightest hint of vanilla making up the main body of the flavour profile, while the faint note of herbs dance fleetingly across the back of the palate.

With the true light, the flavour profile grows markedly more pronounced, with the rich, fruity sweetness growing all the more pronounced. Interwoven amongst the sweetness are hints of herbal (think thyme) and incense like notes of the Oriental varietals and Syrian Latakia; capped off with the slightest hint of vanilla. Every so often, a slightly sour note will take hold, only to disappear almost as soon as it is detected.

As the bowl progresses through the mid-point, the sweetness grows yet more marked, taking on a flavour profile akin to a Creme Brule mixed with fragrant Middle Eastern herbs. Woody, earthy notes begin to appear around half-way as well, with the occasional peppery note adding a bit of excitement to the mix. The sour notes detected in the top portion of the bowl remain, growing slightly bolder in character; yet remaining fleeting.

The bottom third of the bowl bring an ever-changing melange of sweet notes, first taking on the flavours of a pie-crust, then a marked marshmallow note, before finally settling on a nutty, nougat like flavour. The fleeting sourness remains in the background, while the wood-like notes grow bolder, giving off a flavour akin to the aroma of a power-saw cutting through pine board-stock. As one reaches the heel, the final puffs bring strong flavours of sweet spiced rum.

The aftertaste leaves a strong note of Latakia on the tongue, which I find rather interesting, as this is actually bolder than the Latakia flavours in the smoke itself.

The room-note on this blend is tolerable, bordering on pleasant for the non-smoker. The fruity-sweet notes of the Virginias form the base, with the intoxicating aroma of Orientals gently caressing the olfactory senses, never overpowering, but rather hinting at the depth of flavours to be found.

The burning qualities of this tobacco are superb (even when smoked straight from the tin), requiring the bare minimum of fiddling and relights to smoke rim to heel, leaving minimal dottle behind.

When it comes to nicotine, this blend is about equivalent to a regular cigarette. I find it satisfies my need for the Vitamin N, however is light enough to smoke before breakfast without concern.

Now, to the bad…and there are three issues I came across with this blend.

Firstly; I find that this blend can, and will bite if either not dried enough, or not given enough respect. Secondly; while the flavour profile of this blend is wonderful, I find it to be a touch to fatiguing to the palate for all day smoking – a couple of bowls a day are about all I can manage. Thirdly; that classy gold-leaf on black stock label I referred to earlier? Next to impossible to photograph with my seriously lacking photography skills.

I would be remiss, however, not to note that the first two detractors which I have noted could very well be due to an issue with my personal mouth-chemistry (something I experience from time to time, always, seemingly, in blends that I enjoy); whilst the third is definitely due to a personal deficiency!

It is difficult to smoke this blend without making comparisons to it’s "sister" blend, McClelland PCCA Tudor Castle; indeed, some pipe-smokers note that the blends seem to be almost one and the same, albeit the Tudor Castle featuring Perique whilst the Orient 996 features Syrian Latakia. I, however, feel that such a statement does not do either blend full credit. While there are numerous similarities, the differences are just as voluminous and marked. While the Tudor Castle provides a heady, stout and earthy smoke, Orient 996 is light, sweet and flavourful. Both blends are winners in my book, and have found homes within my cellar. 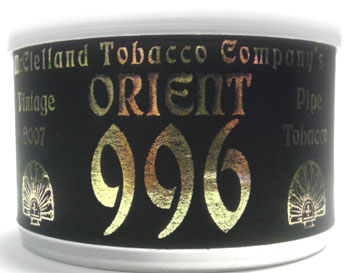