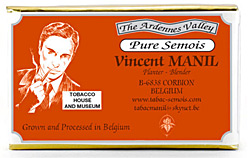 Semois is a rich tobacco cultivated and bred exclusively in Belgium that started gaining ground in the US a couple of years ago. Since then, American pipe smokers looking for something a little different to stuff in their briars were piqued. There’s plenty of interesting articles and talk about it on the Internet for those more curious about its history, how it is grown and what sets it apart. For this review, however, I’m going to focus on my time spent with Vincent Manil’s “Le Petit Robin,” the newest of the Ardennes Valley creations. This Semois is different than others, and with reason: it’s a “Semois enhanced” tobacco, with roughly a third of it being Semois, the rest comprising of naturally sweet and lighter (what I assume are) Virginia leaves. The idea of this particular blend is a mellower character than an all-Semois tobacco. Le Petit Robin intends to give a taste of the Semois experience without being overwhelming.

The brick of Le Petit Robin I received came in a 3.5oz/100g portion, wrapped in a foil-lined cardboard box of sorts. The tobacco is cut thin, about as thin as one could imagine tobacco to be cut. It is nearly hair-like and isn’t as typically dry as a whole Semois, which is good because the delicate cut of Le Petit Robin would likely turn to snuff rather quickly. The smell in the package is pleasantly sweet in only the most natural way, which comes off as almost like warm, blooming honeysuckle. I’d highly suggest getting this stuff in a suitable jar as quickly as possible lest it lose its character and moisture. 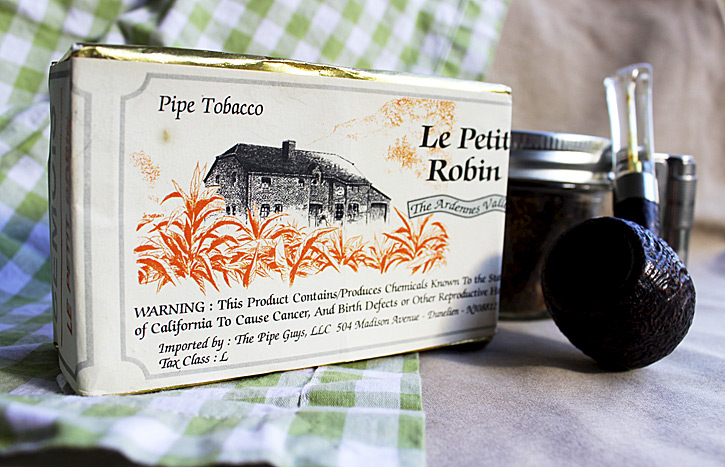 Packing the bowl for the first time, because of the cut, requires a little finesse as it wants to cling to itself. Through some trial-and-error, I found balling it up a little and layering to be just as effective as crudely stuffing it in. This way it won’t cause airway restriction nor be too loose. When first lighting flavors are subtle and woody, like distant smoldering maple; the cut takes to a flame instantly. About a third down the bowl, things become interesting. Now is where the Semois comes into the scene, with the characteristic spring-garden floral aspects and “bold tobacco freshness” mingling with the sweeter side of the lighter leaf. Proto-exhaling is an absolute dream–akin to wafts of delicate, baked confections. It’s not a particularly meaty smoke, but there’s plenty of body, along with plenty of smoke.

Halfway down the bowl the tobacco changes from naturally sweet and bready to pleasantly spiced…think light mace leafs or allspice, again, mostly being picked up from the back of the tongue as it is rolled out of the nose a little. This is also where the floral notes typical to a Semois become more noticeable but not as pronounced as other variants I have tried. The tongue gets a few pleasant “prickles” at this point, which enhances the overall experience. It’s a smoke with an excellent mouth-feel, thick but not tongue-coating; a touch of spicy strength without being fatiguing. As one who enjoys a pipe to the very end, I look forward to the thicker and “final hurrahs” of any tobacco. Here instead, the consistently clean finish is surprising. The last part of the bowl to the bottom of the chamber it mellows out a tad and is almost milky, having a Connecticut cigar mixed way about it with a touch of baker’s cocoa. Beverages I managed to pair successfully with Le Petit Robin were black mid-roast coffee, lighter whiskeys and more tart ciders, and I highly encourage others to do the same. 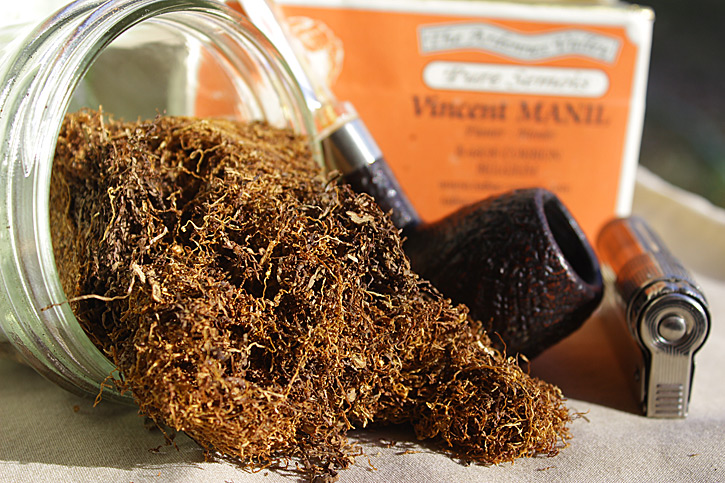 This is a lovely whole-palate tobacco experience, if not a majority upper-palate. If you’re not pushing a little out through your nose every once in a while, there’s a lot being missed. If this were a whole-Semois blend, which ordinarily would pack a punch to the unsuspecting both in robustness and nicotine, whole-palate enjoyment would be only for the bold. Performance of this blend overall is forgiving. Setting aside the pipe for a few minutes I found relights to be a joy and any tamping requirements throughout the smoke are minimal. Fast or overzealous puffers will want to beware–the cut of this tobacco is so deftly fine that it can get hot fairly quickly if not initially packed on the firm side. I discovered with a looser pack, the fast-burning of this delicate leaf will give a muddy and tarry experience, as well as a not-so-cool smoke. Proper packing isn’t difficult if one is mindful to load to keep the draw a tad constricted, but being careful not to pack too much. To that end, slow smokers as well as those who tend to be hasty in their puffing shouldn’t have much trouble. Nicotine is moderate and satisfying, to the point where I could have another bowl if I wanted but I’ve also learned with things pleasurable to leave myself wanting a little more so the next time it is with a happy anticipation. For those wondering if family members or innocent bystanders out and about will also appreciate your enjoyment, compliments were given aplenty when lighting this stuff in public. Some said it smelled like a nice, mellow sweet cigar, others said it simply smelled “like a strong” or “manly” pipe tobacco. A particularly pretty young gal told me it smelled like baking brownies–keep this in mind, fellas!

Color me impressed. I’m certainly no Semois expert, but aside from Le Petit Robin’s unusual thin cut for a pipe tobacco, this stuff with its easy to smoke and easy to enjoy nature gives a lively and effortless way to get into this genre of leaf. There’s a lot going on in this blend, enough that those looking for an honest, sophisticated smoke as well as those looking for something to switch up their daily routine will be pleased. I’d encourage anyone curious about Semois or simply something different to pick up one of these lovely Belgian bricks of unique leaf, newbies and veterans alike.